“I have made my last bundt cake.” The mother was wistful.

The daughter said, “Without even making your first,” pointing out the sticker still wrapped around the fluted pan. The sticker proclaimed features: “Non-stick! No need for spray!” and “Easy Clean-Up!”

“You knew what I meant,” said the mother.

The daughter dropped the cake pan into the cardboard box; it landed with a clank among cookie sheets, atop a stack of Tupperware stained orange by a thousand re-heatings of leftover pasta sauce.

Despite believing she had prepared herself for how this would go, despite marshaling superhuman reserves of patience for the mother’s reminiscences over every item sorrowfully relinquished, the daughter was weary. She had begun to contemplate the glass of wine that would be her reward for this weekend. In fact, she was revising the glass of wine into a Manhattan. She had performed a mental inventory and assured herself that she was in possession of bitters, and she had promised herself that she would never, ever say to someone, “I have mixed my last Manhattan.”

Not that there was anyone to say this to.

She had begun the weekend by congratulating the mother for being proactive. How much easier this would be, she said, to do now.         Everything, later, would be harder.

“We should bake one,” the mother said with the sudden enthusiasm of a late-night driver finally spotting their exit, just when they’d begun to fear spending hours on the dark highway.

“But we’re almost done with this cabinet.” Momentum gathered slowly but could dissipate in an instant. The daughter knew how important it was to seize control.

“I have eggs,” pleaded the mother. “And plenty of flour. The cocoa would only go to waste.”

That a bundt cake for just the two of them would also be a waste – the daughter did not bother saying.

“It’ll be fun,” the mother said, her eyes wide and bright in a way that would’ve buoyed the daughter’s spirits had she not memorized the pamphlet’s bullet list: “impulsive;” “childlike behavior.” Third on the list was “suspicious.” Almost on cue, the mother narrowed her eyes. “Why don’t you want to have fun with me?”

“It’s not that,” the daughter said. “I just don’t like chocolate.”

“You liked it well enough that night,” the mother said, without elaborating.

“Oh,” the mother sighed, as the daughter had hoped she would, and launched into reverie: the joys of rolling out cookies together, the way the daughter would pinch off bites of dough to eat when she believed the mother could not see her. The daughter, too, remembered: the sound of her mother’s paring knife scraping dough off the cotton pastry sheet between batches; the scolding when she rolled the dough too thin; the illicit taste of the forbidden dough.

The degree to which the father had been covering for the mother had become apparent in the weeks after the funeral. The mother’s haze, initially excusable by grief, did not lift. Yet he had made it possible for them to remain in their house. He must’ve turned off the gas on the stove a hundred times, sweeping into the room a minute after the teapot’s whistle had stopped. Gently guiding her out of harm’s way.

But in his absence, the mother’s vulnerability was plain. As a child the daughter had often wished for a sibling, a companion to scheme with in coded burbles, an ally in the high school hallways. Someone to bear witness to her own childhood. Corroborating testimony. Now, the desire had returned.

“You should take some of this stuff home,” the mother said, not for the first time.

The daughter did not explain, again, the ludicrousness of shipping well-used, inexpensive goods across two states. She did not reiterate her lack of emotional attachment to cupcake tins or flour sifter. Did not remind her mother that she attempted to avoid carbohydrates, in general.

“You are beautiful,” the mother said. “You always have been.”

“Thank you,” said the daughter, who had learned to go along with the non sequiturs; it was easier that way.

“I should have told you,” the mother said.

The daughter wrapped two pie plates in newspaper and set them gently in a new box.

In high school, the daughter had become convinced that she could harness chaos and conform it to her wishes: she could monitor calories in a color-coded spreadsheet labeled “control.xls” on the desktop of the family PC; and when too many calories came in, she could seize control of the outflow as well as the intake. If, for example, she’d been unable to hold back from the black forest cake the mother had made for her bridge club.

Then, the daughter blamed the decimated cake on the family cat.

“I hated watching you be cruel to yourself,” the mother said now. “Life is too short not to be kind.”

They stared at each other, across the half-packed box of unneeded kitchen items. The daughter felt as if she might choke on a lump of salty gratitude. If only the mother had said this earlier. If only the daughter had something to offer in return for having received it at last. “Mom,” she said, “Let’s do it. Let’s bake a cake.” An adventure, together. Puffs of flour in the air. A surge of serotonin.

But her mother’s eyes had lost their focus. “Don’t be ridiculous,” she said. “What good would that do anybody now?”

Jenn Stroud Rossmann is a professor of mechanical engineering at Lafayette College. Her fiction has appeared in failbetter, Indianola Review, Tahoma Literary Review, and other journals. She throws right, bats left. 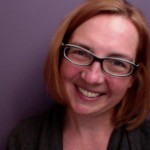