No Way to Run a Railroad by David S. Atkinson 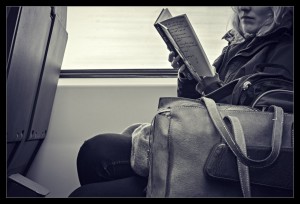 An immaculate man dressed in white and light-blue striped coveralls with an engineer’s hat led a burly man dressed in stained dungarees into the part polished and part filthy engine compartment of the train. Shiny brass tubes of various diameters ran the length of the compartment. A series of gleaming silver levers and knobs jutted from a panel in the front. Those were the clean parts. At the back however, by a hatch to the boiler fire, a pile of coal sat next to a chute. That part was dirty with accumulated coal dusty, that part only.

“First day?” The engineer asked. He held out a hand and the burly man shook it. “Jon.”

“Carl,” the big man replied. He grabbed a dented shovel from the coal pile and stood with it at the ready. “I’ve done this before, though. I know how to work.”

Jon smiled. He looked Carl up and down. “I see that. We’re a little different around here and it takes some getting used to. I thought I should bring you up to speed.”

Jon held up his hands. “It’s nothing bad. In fact, your job is exactly as you’ve done it before. You still shovel coal as needed the same way. My job is a little unusual, though. We work in here at the same time and I didn’t want you to see it and get confused. As long as you concentrate on just shoveling at that time you’ll do fine.”

“See the communication setup over there?” Jon asked as he pointed. There was a large copper bell, a twisting chrome tube with a funnel on the end, and a flat black disk suspended within a metal ring by a number of springs. The devices were all mounted in a cubby at a side of the compartment.

Carl glanced as Jon pointed, but looked back immediately. He didn’t appear to pause to take any of it in. Instead, he seemed intent on keeping his eyes on Jon. “Yeah.”

“Well.” Jon smiled. “We don’t exactly have a fixed route like other trains, or schedule. We start out with a preliminary idea, but then the passengers have to come to an agreement. They let me know through the setup and I take them where they decide. If they change their minds, for any reason, they call again. I guide the train accordingly.”

Carl glanced over at the cubby again. “But I just shovel?”

“Yup! More coal as needed. Whether we’re continuing in the same direction or whether we change doesn’t make any difference for that. It all takes coal.”

Jon nodded. “I wanted to explain since it’s a little unorthodox. Make sure there were no surprises.”

Carl’s eyes darted around. He fidgeted. “It is different,” he finally admitted.

The copper bell clanged shrilly. Carl flinched and Jon ran to the cubby. He put the chrome tube to his year and shouted: “Yes?” into the flat black disk.

A murmuring emanated from the funnel. Jon held it over his ear tightly to be able to hear. The murmuring went on for a while.

He ran to the front of the compartment and began pulling levers and turning knobs. He compressed a spring switch on the end of a long shaft sticking up from the floor and pushed the shaft forward. The engine roared to life. Carl, when Jon pointed to him, began shoveling coal from the pile into the boiler fire. A few levers more and the train chugged forward.

Once the train was up to speed, Jon turned to Carl. “We’re running a tad behind because the passengers had trouble agreeing on a single place. Most wanted the lake by Cooperstown. There’s a fresh fish place there and everybody’s hungry. Others, though, brought snacks and wanted to take pictures of the mountains outside Leadville instead. South instead of north.”

Carl shrugged and kept shoveling. “So which way we going?”

Suddenly, the train slammed to a halt. The wheels screeched. A whistle shrieked. Carl flew, scattering coal, and the shovel clattered off down the compartment. Jon had grabbed onto one of the brass tubes and managed to hold on, but he was still wrenched around badly.

“Emergency brake,” Jon commented once it was quiet again.

The bell rang and Jon ran over to the communication cubby. Carl grabbed the shovel again and pushed the coal back into the pile. He looked over at Jon as he did so.

“Someone really wanted to take pictures of those mountains.” He pulled a lever and the train began moving again, accelerating. “Since they weren’t going to actually go to them, they decided to stop the train quick so they could take a few snaps when they saw a good view. Just pulled the emergency brake to do it.”

Carl sputtered. “They can do that?! Risk safety of a whole train?”

Jon grimaced. “They just did, didn’t they?”

Carl shook his head. Jon motioned for him to keep shoveling. He got back to it, perhaps a little angrier than before.

The train stopped suddenly again after a while. Both Jon and Carl were prepared. Jon went to the communication cubby again and conversed with it before putting the train in motion once more. Carl waited for an explanation. Jon concentrated on steering the engine.”

“How many more times they going to do that?”

Jon didn’t respond, but the answer turned out to be seven. Before an eighth could occur, the bell rang. Jon talked for a while before returning to the controls. The train gently slowed. Then, after coming to a careful stop, it reversed and accelerated backwards. Southbound. Soon it was up to speed again, heading in the exact direction from whence it had come.

“What now?” Carl asked while shoveling.

Jon folded his arms over his chest. “Some of the passengers were going back and forth on the whole fish/mountain thing. They were hungry so the fish advocates had them at first, but then it took too long. The middle-roaders decided we wouldn’t arrive before the restaurant closed, so they changed their mind and backed the mountain people instead.”

“But we were halfway there!”

“It’s going to be dark before we arrive! No pictures AND no one gets fed.”

Jon sighed. He looked out a small fish-eye window in the side of the compartment wall. “I am aware, but we go where the passengers say. That’s what we do.”

Sure enough though, Carl was proven correct. They steamed along as light faded from the sky, the sun setting. When the darkness was complete, the bell rang. When Jon returned from listening to the chrome tube, he slowed the train to a stop once more. However, he didn’t set it in motion in the opposite direction.  Instead, he kept the engine roaring as if they were moving.

Carl shoveled coal to no purpose. “Well?” Carl finally demanded. “Not back toward Cooperstown again? Can’t they decide at all now?”

Jon’s mouth was a thin line. “They decided it was too late for either fish dinners or mountain pictures, though some were still dead set on one or the other regardless…perhaps some on both. The bulk, however, are tired. They want to stop for the night at an inn.”

Carl grumped. “Sleeping in their cabins ain’t good enough for them?”

“These tracks run north and south. Is there an offshoot to another track we’re waiting to head off to?”

“Look!” Jon snapped. “They say they want to go east? Fine! We take them east. They keep running back and forth over the same ground? Great! We do that. They want to go where the train doesn’t go? Wonderful! We sit and wait until a new track gets attached that goes there. What choice is there? We follow directions!”

Carl jammed the shovel in the coal pile and leaned on the end of the handle. “We sit here and wait?”

Jon snatched the hat from his head and threw it to the floor. “Yes, God damn it! We do! Who cares anyway? They’ll just change their minds again later and tell us to go somewhere else. Heck, they’ll probably fall asleep waiting and get hungry again by morning. Then they’ll probably be on fish again. You okay with that?”

Carl was silent for a while, leaning. He watched as Jon retrieved the hat, dusted it off, and put it back on.

Finally, he responded: “Okay…but this is no way to run a railroad.”

David S. Atkinson is the author of “Not Quite so Stories” (forthcoming from “Literary Wanderlust”), “The Garden of Good and Evil Pancakes” (2015 National Indie Excellence Awards finalist in humor), and “Bones Buried in the Dirt” (2014 Next Generation Indie Book Awards finalist, First Novel <80K). His writing appears in Bartleby Snopes, Grey Sparrow Journal, Atticus Review, and others. His writing website is http://davidsatkinsonwriting.com/

and he spends his non-literary time working as a patent attorney in Denver. 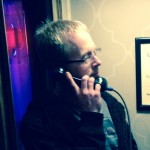