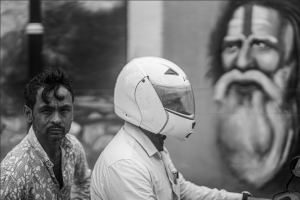 This place is one end of a wormhole through time and space.  I know this because I have passed from the former world to the latter a multitude of times and I exclusively land at this particular open-air restaurant, drinking pisco sours.  It was here that a cousin explained to me that I have no memories because I don’t pay attention to the universe.  “If you don’t pay attention, you can’t make memories.”  Then she pulled the forty Soles I had left for the waiter out of the tray and chastised me for tipping too much while a horrified expression took complete control of his face.

But I do have memories.  I remember being a boy and passing through a different portal to find my father drinking Pepsi and chain-smoking in the dark corner of a pizza place called Shotgun Sam’s.  Neither of us ever seemed to understand what I was doing there, but there I was again and again while he angrily ranted about politics as if he was with one of his buddies even though he was actually with an eight-year-old boy.  It never made any sense except that maybe he didn’t have buddies.  He vanished from my life about the same time Shotgun Sam’s was torn down and when he died not too long ago, they didn’t tell me for several years afterwards because that was his wish.  I guess he thought the news of his death would bring me joy and he didn’t want that for me.

I am a time traveler, if only in one direction, passing through great periods of nothingness in a sleep-like stupor to wake up inside this or that restaurant, drinking heavily to replenish my fluids.  It has been exhausting to travel so much in exchange for so little life but this is my astronaut fate—to endlessly search for some parallel universe that may or may not exist, to skip across time like a stone on top of the water.

The Sidewalk Café in Venice fronts the Pacific Ocean, more like a church than a restaurant, and God did indeed speak to me there once.  I was drinking beer in the afternoon sun with my arm stretched out along the metal railing that separates tables from boardwalk when I heard the guitars, all of them playing the same Led Zeppelin song, synchronized even though they were separated from one another and hidden from view.

There is a sushi restaurant in San Francisco that also no longer exists.  It was perched on top of a steep hill in the Tenderloin and it was there that I shared a bottle of sake with each of my sons.  I flew them out to me separately while I was working on the road in California, wanting to make certain that they understood that however odd they felt, there were still people just like them, perhaps even weirder, on this particular planet.  As I was driving my oldest boy back to the airport, it suddenly occurred to me that he might end up like me, cursed in the same way, and I began to cry.  We were crossing the Bay Bridge, the sun in front of us and low on the horizon, flashing like a strobe light in the quick spaces between steel beams, as if time, while not reversing, was at least slowing down.  It was then I asked him to swear to me that that would never happen, that he would never be like me, and he seemed to understand.

My last job was years ago at a school in Mexico City which had a Starbucks in my building, two floors below my classroom, and early every morning I was their first customer, transported via the pink Metro line which terminates at Observatorio, so excited about my new job that I couldn’t get there fast enough.  I would have a giant black coffee with a ham-and-cheese croissant while reviewing my lessons for the day, optimistic that things might work out for me after all, that all my failures were simply links in the complex quantum mechanics of stars which had finally aligned to grant me the thing that had been denied me for so long.  But then there was an earthquake and a giant wall fell on my apartment.  I wasn’t there, but that didn’t matter.  Stress is a trigger for this thing you see and when that earthquake left me without a place to live, it took me out just the same.  It became harder and harder for me to get out of bed and go to work until it became impossible.  That is just how this thing is.  I was once again jettisoned into the cold of outer space and I doubt that anybody will ever ask me to teach physics again.

The cheap eyeglasses I bought in Cusco do not have glare-resistant coatings so they reflect the lights at night to make me feel like I’m moving through a storm of exploding stars at the same time I’m walking down this familiar street in Lima, drunk on pisco, desperately searching for a Starbucks to have a black coffee and a ham and cheese croissant and pretend, if only for a moment, that there is indeed some way back through time.  I will search every corner of the cosmos for it even though according to Einstein it can not exist, always hopeful that when I open a door to some new world, there will be an angel waiting for me with cocktails in her hands.  But I know that that is just a dream and that in reality it will always be the same demon there, a cigarette hanging out of his mouth.

Nicolas is a graduate of the Red Earth MFA program at Oklahoma City University.  His work has appeared in more than two dozen publications and his story “Loma Prieta Blues” won the 2013 Vuong Prize.  He is a high-school dropout (not quite completing the tenth grade) who has been living and working in Latin America for the past five years. 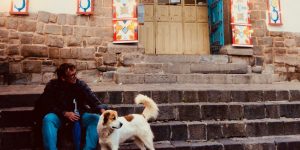