Where You Never Thought You’d Be by Cathy Ulrich 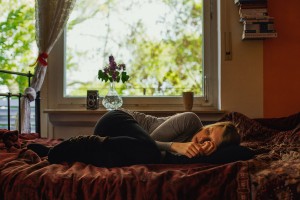 You never thought you’d be, at age 35, living in your parents’ basement. After your miscarriage, you packed up some things from your apartment and went back to them.

Who’s the father? they wondered when you arrived at their doorstep.

I don’t want to talk about it.

Your parents lure you out of the basement with bowls of spaghetti.

Do you want to talk about it?

Your father gives you a twenty and tells you to go do something you enjoy. You take the bill to the cheapest bar downtown. You order shots.

Can you make me a Galactic Ale? you ask the bartender. He can’t. You have kamikazes instead.

Wind of the gods.

After you’ve downed your shots, you end up in a dark corner with an older man.

My father is dead, you tell him. He died when I was only a child.

You like the lie, the way it feels natural.

The older man thinks you have a father fixation. He orders you a Rob Roy. He calls you sweet thing. You thought only movie rednecks did that. You put your mouth up to his ear.

He plugs money into the jukebox and you fall up against him. You’re not dancing, really; it’s more a kind of controlled stumbling.

You rush into the bathroom and vomit again and again. A pair of young girls are fixing their makeup, puckering their lips before the dirty mirror. Their reflections watch you. They’re so young. You hate them. You hate them the way you hate the girls at school, bare knees brushing up against their desks, writing notes, rolling their eyes when you call on them.

Don’t ask us, they say. Ask one of the boys.

The girls at school hate you too, for your pastel suits, for your bobbed hair. They saw their prom dates looking when you bent down to pick up a pen. They can’t wait to be done with American literature, and done with you.

They’d laugh at you if they saw you here in the bathroom of the cheapest bar downtown, knelt by the clogged toilet, too weak to have closed the stall door behind you. They’d laugh if they knew how much you cried when your baby died, that you left the father’s name blank on the paperwork.

They didn’t know you were pregnant; no one knew. You’ve been calling in sick to work. You don’t want to go back. You can’t bear to go back. The girls in your classes, and him in the front row, chewing on the end of his pen, eyes huge behind his thick glasses.

The girls would like you better if you got contacts.

I don’t want the girls to like me better.

The young girls finish putting on their makeup and go. You’re alone on the sticky floor of the bathroom. The older man is knocking at the bathroom door. He’s asking if you need help.

Cathy Ulrich never goes to the bars in her town anymore, because none of the bartenders can make a Galactic Ale. Also, because she gets funny looks for writing in notebooks, because nobody writes by hand anymore. 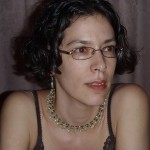