Never of Love
by Judy Hall 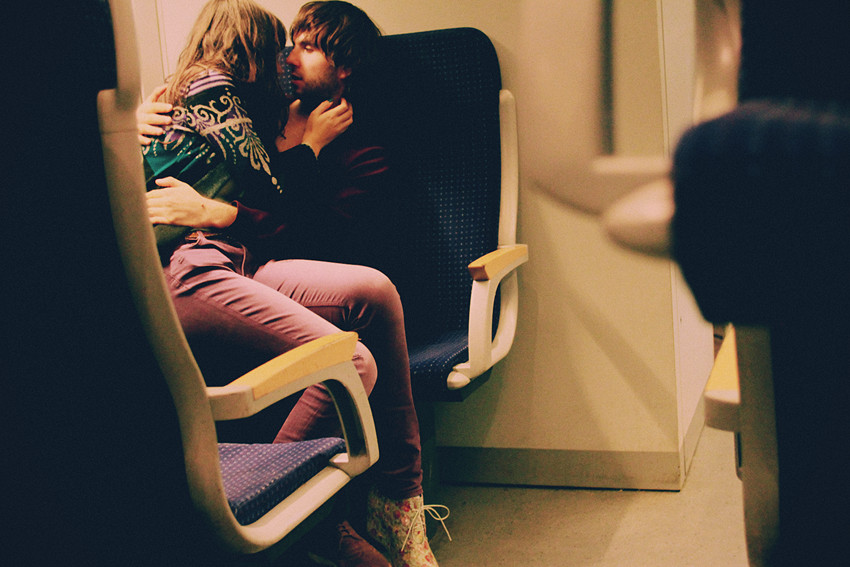 Remember the day I wore that brown dress with the big concentric circles and you were wearing ratty jeans and a Marilyn Manson t-shirt swimming on your skinny body? I watched you watching me, unabashedly staring at my breasts, and I thought you might be good for a fuck, if nothing else. I described the ideal cock to you and you said, well, guess what? And we made out in my little white Ford Aspire. Who knew you were poet or a liar or how gentle you could be or how much you could hurt me? Who knew there would always be this question of veracity hanging between us, lying in the pit, pendulum swaying, with dissembling being your temperament?

The time that my daughter threw up at the Big Boy on the Parkway coming up from Down The Shore I thought for sure, for sure you wouldn’t want me, this damaged woman with a kid who can puke on command, and you turned green but you didn’t leave us. You held her little shaking body, righteous with ire, and told her she mustn’t throw up when she is angry and that she had made Mommy sad, and my daughter was stricken with this news. Then I knew you could be the right father, the right lover, the right choice even if you are a prevaricator by nature and even if you wounded me more than anyone ever could. And I knew that you could accept the lunatic that I am because not everyone – maybe not anyone – could. I am not faithful but I am honest and you are not honest or faithful and there is always the question of truth but never of love. Somehow we have made this mess work with piles of pills and a gigantic Yoruba psychiatrist who wears a gold diamond studded dollar sign ring and has a name with consonants that just don’t seem to mix in English but which I taught you how to pronounce.

Who knew there were things I could forgive, like all the late nights and the suspiciously broken-down trains, me waiting with the kids at the Walnut Street Station, them sitting on the roof, dangling their legs through the sun and moon window atop the iridescent green Camry while I sang lullabies and spelling words or practiced times tables with them? But did I call you on your trustworthiness? I wedded you, had a baby with you, I moved forward as if trust were written in stone, proud that I, myself, had invented the illusion of faith.

When I tried to leave you that beautiful summer evening, heavy with the scent of lilacs and sorrow and death, when I thought I could not live without trust, I wanted to wound you, to break you like your dishonesties had eviscerated me and you cried, swore you could change. I willed my heart a stone, into a hunk of black obsidian. You went to the basement and locked yourself in with the nail gun and I called the police; they heard you say you’d shoot them with the nail gun and I never saw so much navy blue in all my life. They came like locusts, swarming our house, grabbing our children from where they lay, crying, in the purple bedroom, and then hiding them behind the aqua green minivan while they took you to the bright, flashing ambulance in handcuffs and everyone was crying. Everyone.  The oldest stared at you in eleven year old wonder and distress, struggling to see you as the blue people pushed him away. Our toddler, in the arms of a stranger, cried out Sweetheart in his baby voice, lifted his chubby arms toward you. My daughter, who had become irrevocably our daughter, really your daughter, closed her nine year old eyes and pretended it wasn’t happening, this couldn’t be happening, this shouldn’t be happening – and she would never remember that night, never, not even on the precipice of adulthood could she remember almost anything from that whole summer. I watched it happen, stunned and I loved you so much, although you are a liar you are a good man, and the question of truth seemed so much smaller than the love the five of us had, love I couldn’t dismantle even with snapped lilac blossoms and silver handcuffs on your bruised wrists.

Judy Hall is a teacher of English, although she wishes she could just write all the time. She has a Masters in Literature from Rutgers and is an MFA candidate at William Paterson. She’s been previously published in Pyrokinection (July 13), Linguistic Erosion (June 13), The Story Shack (July 13) and Circa (June 13) and elsewhere. She lives in New Jersey with her husband, three children, a very stupid cat named Vladimir, an evil cat named Tonks and a number of unnamed fish.