Near Unison by Alia Volz 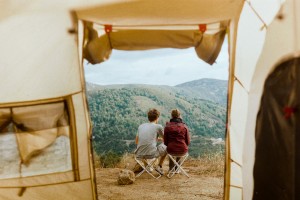 “Interpreter,” I announce, entering the examination room. “Sorry to keep you waiting.”

“Oh good, you’re here,” says Dr. Lichter, without looking up from the file in her lap. “We got through most of it, but find out what Mrs. Magaña wants to ask.”

I hang my purse on a hook beside the sharps disposal box. Mother and patient sit on folding chairs against the window, striped in sunlight leaking through the blinds.

“Cuál es su pregunta?” I ask her. Mrs. Magaña answers in Spanish and I transform her words into English, almost without thinking, without analyzing. I assume her voice and mannerisms. We speak in near unison.

We say: “I’m worried about Pablo because he—his thing seems too big. My other son didn’t look like this at his age.”

Dr. Lichter looks up from her notes, her wispy eyebrows raised.

“His penis—it’s…enormous.” Mrs. Magaña holds her hands about a foot apart and widens her eyes at the space between them. Her curvaceous lips twitch like Marilyn Monroe’s.

The boy of the gigantic phallus sits with his head and shoulders folded towards his mother, as though hoping to slide back into her body through a secret entrance at her armpit. His thick black lashes flutter like moth wings. Craggy vertebrae tent his baby blue t-shirt.

He is severely disabled, physically and perhaps developmentally. Unless Dr. Lichter speaks the name of his malady, I won’t know it. As an Interpreter, I don’t ask questions. My function is to facilitate conversation without influencing it. I am a machine.

“Could it keep growing?” Mrs. Magaña asks quietly. “I’ve never seen one this big, not even on a man.”

The boy rocks in his chair, slowly, on a secret ocean. He draws his knees apart. I imagine the outrageous member flattened under his jeans, notched and deflated like a day-old balloon animal. How can this fragile boy carry around a John Holmes cock?

Dr. Lichter’s eyes are a blue so light, I can see right through them into her brain. Inside, she’s laughing. I also find this one funny, which makes us both blackhearted.

“Ha empezado a masturbarse?” I shadow.

“In his pants and also on the floor.” The doctor makes notes on the chart.

“He’ll be eleven next week, won’t you, my heart?” She peers at him solicitously and kisses his forehead. The lipstick stains him. She smudges it with her thumb, leaving a pinkish mark, like a scrape, above his eyebrow.

High school is my son’s problem. He’s sixteen. He won’t let me touch his hair anymore, much less kiss his face. He padlocks his room when he goes out. Naturally, I have no idea about his penis size. If it were extraordinary, like Pablo Magaña’s, I’d be happy for him. It would be a boon in his life, a source of pride for him and a joy to his lover. I don’t even know if my son has a girlfriend. He won’t tell me those things.

“We did a scan last time you were here,” says Dr. Lichter, “and Pablo’s endocrine levels are those of a 15-to-16 year-old. He must have entered puberty very early, at about eight.”

“Mrs. Magaña, your son’s brain is not normal.”

The mother stiffens, as if someone she doesn’t like has entered the room.

“We did the scan to rule out the presence of a tumor on the pituitary gland.”

“He could have a tumor?” She pales. In the vast sea of future possibilities, Pablo is yanked away in a cancerous riptide. She is left bobbing alone on the surface with thousands of little pills and a back brace, surreal medical bills, a half-pack of adult diapers, and a clunky orthopedic shoe.

“Since his endocrine levels are high, we had to rule it out. We did not find a tumor.”

“So the test was normal?”

“No,” Dr. Lichter answers sharply, “not normal.” Tight little lines dance around her lips, and I realize that she is worn out from arguing with hopeful mothers. “But we did not find a tumor.”

“The puberty phase should close within a year or two. His penis probably won’t grow much more.”

“Did you hear that, my heart?” says Mrs. Magaña. She touches his arm, she strokes his back. Pablo lifts his bushy eyebrows and moans. He needs her endlessly, will stay beside her endlessly. She kisses him, licks her thumb, and smears the lipstick.

I touched my son for an instant this morning, contact stolen before I woke the beast to get him off to school. He lay on his side, and I placed my fingers on his broad back, just to assure myself of its warmth. He’s a big boy, a little doughy but not fat. He won’t grow much taller. I noticed a small round welt on his forearm. It might be a cigarette burn. My son brings home bruises from football games and hangovers from parties I can’t keep him away from. His nose was broken by someone I have never met.

Alia Volz’s stories and essays are found in Tin House, The Rumpus, Utne Reader (forthcoming), ZYZZYVA, Narratively, Nerve and elsewhere. She recently completed her first novel, a mean little cowboy noir in which all of your favorite characters die. 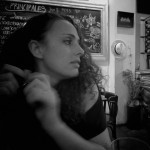