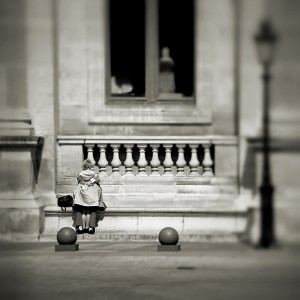 When Felton went into the kitchen, he saw that mother had moved the table over to the sink. When he asked her what she was going to do, she ignored him because she was reading the instructions on a little pink box.

Lue Ann came in from the other room, wearing one of daddy’s undershirts, which came almost to her ankles. She lay on her back on the table with her head hanging in the sink. She was going to sing in the children’s chorus in a concert at school and mother was giving her a home permanent.

“Get out of here!” Lue Ann said to Felton. “This is none of your business!”

“There’s nothing here for you to see,” mother said. “Go on outside and play with Mr. Fatty.”

“I wouldn’t worry too much about Mr. Fatty if I were you,” mother said.

Mr. Fatty was Felton’s favorite toy, a fat clown doll with orange hair, dressed in a red-and-white striped suit with big plastic clown shoes. His eyes were inverted plastic disks inside which his eyeballs moved around crazily; his nose a red ball that sometimes came off. His mouth, which seemed too big for his face, was blubbery, obscene-looking lips through which formidable teeth showed. To anybody but the child who owned him, Mr. Fatty was rather grotesque-looking.

“Make them both get out of here, mother!” Lue Ann said.

“Hold still,” mother said, “or I’m going to hold you under the water and drown you.”

After mother shampooed Lue Ann’s hair, she made her sit up in a chair so she could roll her hair up in the spongy little pink clips that came in the kit. When that was finished and Lue Ann’s head was all-over pink plastic, mother made her get on the table again.

With Lue Ann’s head in the sink, mother began applying the curling solution to each strand of hair held in each pink clip, using the “applicator.” It was when the solution penetrated to Lue Ann’s scalp that she began screaming.

“You’re the one that wanted the home permanent,” mother said.

“You’re going to have to hold still!” mother said. “You’re making it worse!”

“She sure is having a fit, isn’t she?” Felton said.

“Yes, and you’re not making it any better,” mother said.

After all the little rolls of hair had been soaked in the solution and the whole house reeked of it, mother wrapped a towel around Lue Ann’s head, gypsy-fashion, and let her sit in the chair. It was time to wait and let the hair “set” on its own. After all the trouble they went to, mother wanted to make sure the permanent “took.”

“The worst is over now,” she said.

Lue Ann sat there, sniffling and shuddering. When the smell of the solution became too much for her, she put her nose as far down into an empty soda bottle as she could. She heard somewhere that this was the best method for dealing with the unpleasant smell.

Felton did a little dance in front of her with Mr. Fatty. “You sure are a bawl bag!” he said.

She was like a snake, coiled and ready to strike. “Shut up!” she said.

“I’ll bet everybody up and down the street heard you.”

“Mother, make him shut up and leave me alone!”

“You leave your sister alone, now. She’s had a trying morning.”

While they were eating lunch, Lue Ann sat across the table from Felton, glaring at him. He couldn’t suppress his smile, his feeling of glee, when he looked at her.

“You are going to look so silly with that permanent,” he said. “You’ll look like you stuck your finger in an electric light socket. Hah! Hah! Hah!”

He held Mr. Fatty up so he was facing her. “Mr. Fatty doesn’t like you, either” he said.

“You stupid baby with your stupid Mr. Fatty,” Lue Ann said. “Still playing with a doll at your age! You’re the one that’s crazy. One of these days you’re going to come home from school and Mr. Fatty is going to be no more!”

“If you don’t both shut up,” mother said, “I’m going to lock you in the closet until one of you emerges the victor. Now, what is it going to be?”

“I didn’t say anything,” Felton said, holding up his hands.

Finally it was time to unveil the permanent. Mother took the towel off Lue Ann’s head and removed all the pink clips and laid them in a pile on the table and stood back to assess the results.

She took the comb and tried to smooth down the mass of fuzz and springy curls, but it was resistant to the comb.

“Well,” Lue Ann said, “what are you waiting for? Give me a mirror so I can see.”

Felton couldn’t keep from laughing. “She looks like a freak!” he said. “She looks like the bride of Frankenstein. Hah! Hah! Hah!” He held up Mr. Fatty so he could get a good look at her, too, and jumped up and down in front of her.

“Freak! Freak! Freak!!” he screamed. “She looks like a freak! She can join the freak show now!”

“Oh, my god!” Lue Ann said, looking at herself in the mirror. “It looks terrible! I really do look like a freak! The concert is tomorrow night! I can’t sing in the chorus looking like this!”

“Don’t get excited,” mother said. “We’ll try to straighten it out somehow.”

“People are just going to die laughing when they see her!” Felton said. “I wasn’t going to go to the concert but now I wouldn’t miss it for the world!”

He ran and got his camera and snapped her picture just as she was in the act of throwing a knife at him.

Mother put some of daddy’s Vitalis on Lue Ann’s hair and tied it up tightly in a scarf to try to flatten it down some. They would leave it that way over night, she said, and see how it looked in the morning.

The next day Lue Ann was nervous about the concert. Her face had broken out in hives and was puffy and pale. If anybody spoke to her, she either snapped like a cornered animal or began crying uncontrollably. With constant brushing, she had forced her hair into partial submission but had resigned herself to having the worst hairdo of anybody in the concert.

For Felton’s part, mother made him stay away from Lue Ann for the day. He wasn’t allowed to tease her, go near her, or make remarks about her hair or about how much she looked like a freak. He was kept busy with little jobs around the house. After he swept both porches and cleaned out the birdcage and the fishbowl, he was given a sizeable list and sent to the grocery store.

He was gone for over an hour and when he got home he took the groceries into the kitchen and set them on the table.

“What am I supposed to do about it?” he said.

When he went into his room to get his library book, he had an ugly shock. Mr. Fatty was lying on the bed, cut in half across his midsection. His stuffing lay strewn over the bed for effect.

His first impulse was to carry Mr. Fatty into the kitchen and show mother what Lue Ann had done so she would punish her, but his better instincts told him to wait and handle the matter on his own.

He picked Mr. Fatty up and stuffed the stuffing back into his abdomen the best he could and, putting the two halves of him together, propped him up against the pillow so he appeared to still be whole. He then got his scissors off his desk, the same scissors Lue Ann had used to cut Mr. Fatty in two, and crept down the hall to the door of her room.

The room was dark and quiet. An oscillating fan on the dresser quietly swept from one side of the room to the other. Lue Ann was lying on her side on the bed, softly snoring, with the pillow bunched up under her head.

The curls on top of her head were sticking out. He approached the bed without making a sound and began cutting them off, one at a time, ever so carefully so as not to wake her up. They fell all around her and around the pillow; some of them fell to the floor.

When he was finished, he had cut off nearly all the curls on top of her head and she was left with a quarter-inch frizz. He left the room as quietly as he had entered it and she never knew he was there.

When she woke up, she began screaming. She ran around from room to room, unable to speak, distracted with grief. She held some of the curls in her hands and was trying to somehow reattach them. She believed they had fallen out on their own from the permanent.

“What did you do?” mother asked Felton angrily.

“What did you do?” she repeated.

He went into his room and came out with the two halves of Mr. Fatty and held them up, one in each hand.

Lue Ann wore a borrowed grown-up woman’s wig to sing in the concert, making her head look as though it were engulfed in a blond cloud. Felton couldn’t keep from laughing but there was nobody to share it with, so he laughed alone. He had the satisfaction, though, of hearing titters from people in the audience.

The next day mother stitched the two halves of Mr. Fatty together, making him even fatter than before by adding some extra stuffing. Lue Ann was sullen and kept mostly to herself. When Felton sat across from her at the table at mealtimes, he wanted to call her names and tell her how much she looked like a clown, but mother gave him a warning look. He would desist, at least for the time being.

Allen Kopp lives in St. Louis, Missouri, USA. His fiction has appeared in The Penmen Review, Superstition Review, Bartleby Snopes, Short Story America, Danse Macabre, A Twist of Noir, The Medulla Review, State of Imagination, Midwestern Gothic Literary Journal, and many others. He welcomes visitors to his website at: www.literaryfictions.com 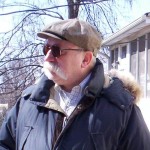