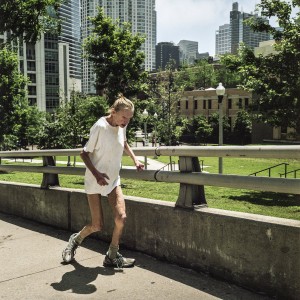 Caroline said the mice were leaves. Mabel pointed them out as they turned the car into the shopping center’s parking lot.

Caroline tugged the key from the ignition. The parking lot was mostly empty, a cluster of Buicks parked in front of the Carmike theater.

They always seemed to eat at the same place—Caroline’s choice. A restaurant decorated with plastic logs and creepy taxidermy. Waitresses wore their hair in buns and stiff gingham aprons around their waists. Caroline reached for Mabel’s elbow at the sloping walkway. Mabel shook her head and waddled her way up alone.

Caroline ordered the restaurant’s home-cooked special—the “Early Bird Thanksgiving”—and Mabel ordered her usual: murky, separating broth that they passed off as french onion soup, with a side of iceberg lettuce.

“My eyes are fine,” Mabel blurted out. Caroline didn’t seem to hear her, dragging a piece of slimy meat through the mashed potatoes.

After lunch, they headed home. Mabel gazed through the fogging window—watching the mice tumble down the balding trees, their red and orange bodies twisting as they rolled onto the asphalt. Their brittle fur crumbled under the cars’ tires. Mabel shivered.

Caroline stared ahead, holding the steering wheel with fingerless gloves.

“I’ll have Theo for Thanksgiving. I can do the cooking this year,” Caroline said. Mabel nodded, her face squished against the cold glass.

Mabel watched the mice out of her small kitchen window, ripping the yellow curtains from the rod to see them better. They somersaulted in her empty yard, holding each other’s human-like fingers. Mabel placed a handful of glittering coffee beans in the grinder, her eyes on the window.

Time passed by so fast.

Mabel took the lid off the grinder, shaking the fragrant soot into a pleated paper filter. A single mouse did a pirouette through the bare, hardened dirt. Mice feet dancing where her herb garden used to be.

Mabel dug through damp boxes, after turning off the evening news, sick of hearing about another shooting, another child killed. The boxes were full of ornaments and tangled garland. She planned to find the hooks for the ornaments and set them out for the plastic tree that was stored in the garage. Caroline was going to take it out the following week.

Those mice ruined her plans. They marched in wearing Gibson Girl hats and carrying tiny wrenches. They told her they had to take the furniture apart. They said they would shatter the bookends. Mabel threw her candy dish at them, stale Skittles scattering over the floor. They didn’t notice.

She called Caroline—who came over with her hair piled on her head and pants clinging to her hips with weak elastic and a drawstring.

“We have to go to the doctor,” Caroline said, holding her close.

Caroline took Mabel to her appointment. The doctor had an unnerving giggle and arthritic slouch. He handed her a prescription, telling her hallucinations were common in aging. His curlicued Z stood out in otherwise messy penmanship.

The medication dissolved the mice. She listened to the clock’s thumping secondhand and spooked herself with old reruns of Unsolved Mysteries. Mabel closed her eyes. She couldn’t remember what the mice looked like.

Caroline called, saying she would spend the night on Christmas Eve. Theo would be at her dad’s and she didn’t want to be alone. Mabel understood.

They baked cookies and licked sugary batter from the spoon. They drank sludgy cocoa and sang to Bing Crosby. It’s A Wonderful Life played on AMC, a marathon flipping between classic black and white and the painted version. Jimmy Stewart’s pastel face filled the screen.

“Why do they have to ruin it with color?” Mabel asked. She poured a bag of chocolate chips into a metal bowl.

Mabel couldn’t sleep. Insomnia replaced the mice. She made a game out of it—tracing each strange sound to its origin. She learned the distinction between each neighbor’s car engine and discerned the varying intonation in the chirps of rummaging raccoons.

Around two she heard the tires screeching, the high-pitched stop of worn brakes. There was a click echoing in the house’s silence.

Mabel shot up, fumbling in the dark for the dangling string on her lamp. Eerie yellow light burned her eyes. She had to save Caroline. They had to go.

Mabel scurried down the hall, yelling. She pulled the blankets from Caroline—who was still curled up in her flannel pajamas.

Mabel remembered. His jaundiced skin and bitter scowl. The IVs he had torn from his arms. His demand to die alone. She remembered him saying how sick of he was of those damned mice singing over and over—as he shattered Caroline’s record over his raised knee on Christmas morning. Her little girl furled behind the couch; she had finally stopped crying. Mabel remembered—kneeling down, plucking black shards from the dense carpet; red stockings dripping beneath a white mantle; and claymation reindeer on a muted television.

Ashley N. Roth is a writer, mother, and animal activist living in Nashville, Tennessee. Her work has been featured in 100 Word Story, Molotov Cocktail, Moonsick Magazine, and HerStories: So Glad They Told Me.