You told me not to play with matches that summer, so I palmed a corner-store lighter instead. The flame reached for the tip of your blue Crayon, until you knocked the lighter from my hands. You wanted to color the sky, you said, and I wouldn’t ruin your chance.

I plodded behind, watching socks fall down the backs of your ankles. You explained that this is why we shouldn’t buy socks at Odd Lots, which was sometimes Big Lots, because kids knew. Feet knew. The store carried three coat styles, and mine was one. I liked the color for fall, a warm maroon. You tugged at the longer sleeve.

We were both coupled by winter, our hearts twisted like tree trunks. We ate cold shrimp in the living room of a one-bedroom apartment near downtown, watching Power Puff Girls and retelling jokes, adjusting bra straps and headbands, discussing jobs that allowed money of our own. We quantified everything those lottery days, green grapes or tiramisu.

We were plump like prunes that spring, tired of snow. Grown. Perhaps this is why I chose to move somewhere warm. Heart still twisted, I navigated a state that you stitched atop a heart on a pillow that I hugged like a tiny person. I told you I had a black thumb, a fun term for not understanding the relentlessness of a southern sun. You said talking to plants gives them life, not because they hear you but because they feed on your breath. It doesn’t matter why a thing works, so long as it does.

I never told you that I kept the garden for you, a swell of life that you will never see. We never admitted such sentimental things. But it’s here now, your garden. It thrives for you beneath a sometimes blue sky.

Jen Knox is a writing coach and the director of Gemini Ink’s Writers in Communities program. Her fiction appears in Chicago Tribune’s Printers Row, Room Magazine, and The Saturday Evening Post. Jen’s collection, After the Gazebo, was released in 2015. Her YA novel, The Lavender House, will be released in 2017. Find her at www.jenknox.com. 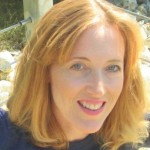