There is no “love” in live ball, and the noncumulative scoring gave me the sensation of turning over a new leaf after each “challenge,” which is what the live ball games were called. Like doubles without serving—a pro put the ball into play—there were up to seven of us on the court, but only four played at a time. Those who were waiting to rotate in watched the points. You got a chance to hit forehands, backhands, lots of volleys, and some overheads. Live ball was played as one continuous game with no breaks except to pick up balls when the basket was empty.

Players complained how dangerous it was to have balls all over the court while we played, but I felt right at home because as a teenager, my dad rapid-fired balls at me from the other side of the net trying to teach me tennis. I was used to navigating around obstacles.

I grew up with divorced parents—my mom took me and dad took my little brother. Much like I worked at tennis now, I’d worked hard at staying close to my dad. So when he told me I had a sister, his secret daughter, who was now 35 years old, I was devastated. He was a liar. Was I ever his favorite daughter? Did he even actually love me? Why lie for so long?

My grandfather had recently died and my dad had nothing to lose by telling the truth. At least he thought he had nothing to lose. His father would have been disappointed in him, so instead I was. Even though I knew my father was a womanizer, I took it very personally. In my mind, I had been the number one woman in my father’s life. I was only his daughter, and I knew it was wrong, but the thought of sharing his attention with this other daughter made me crazy.

It became my business to avenge my dad’s bad behavior in life on the tennis court. It didn’t make any sense, but I needed a new construct that didn’t involve basing my whole life around my father. Now I would base my whole life around the tennis court. My grandfather had built a court for his sons to learn the game—he had been a champion in college—and now the court was the only place I felt safe.

I felt isolated from what I thought was my close family. My brother and his wife had known about the daughter and had met her.

“It’s not her fault,” my brother said.

As a kid, I was asked if I wanted to play tennis. I didn’t. I found the lines of a court too confining. But now, as an adult, the lines in live ball were a source of comfort.

The lines of the court provided a clear boundary—at least compared to regular life—and I loved to call balls “out,” with a definitive tone.

Live ball sped everything up—it was caffeinated. And it made me forget. Things were far less complicated when you took the love out of them. It was the only time I was able to stay in the moment—to focus on the ball and the point being played. In the end nobody cared what the result was. I often felt confused because part of me wanted to know who won. But there were so many points, and a ball hit into the net was no big deal. I kept playing, not only because it was the only time I felt good, but also because I hoped that I could adapt the “live ball” mentality to my own life. I wanted to be able to let things go. I hoped that somehow through the “live ball” experience, I could change my personality. Mostly I was still angry and resentful. I would hit my volleys too hard and launched my forehands.

There were a lot of things in my life that couldn’t be fixed, but I could fix my forehand. Live ball was a healthy addiction because it was exercise, but like any addiction, it left me wanting more. And so I played in the morning and at night. What had started as a once-a-week thing turned into a twice-a-day thing, and I started playing at more than one court.

There was a high probability of hitting a winner off the ball the pro hit to you, and if you missed a ball, the pro fed you another one. It was a game of constant second chances, and that part was important for me because I needed to give my dad a second chance and not write him off because he blew one thing.

“Let it go,” my live ball partner said when a ball flew over my head. The words sounded good to me, like subliminal suggestion. Maybe I could.

Tamara Adelman is a former massage therapist and ironman triathlete living in Santa Monica, CA. She has a B.A. from George Washington University and a certificate in creative nonfiction from UCLA. She can be found most days looking out at the Santa Monica Bay, while writing the next story or training for the next race in ultimate pursuit of the finish line. Her work has appeared in numerous literary journals. 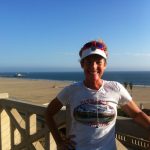