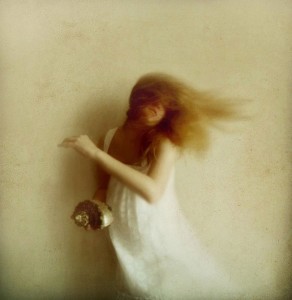 From this distance the water appeared solid, like black marble. She nudged her toes over the edge of the cliff, her legs wobbly as if she were already underwater. Squeezing her eyes shut, she held her breath and jumped.

The cold was like knives shooting up her legs and through the top of her head as she plummeted faster and faster and then slowing until, pop, she shot back up, warm sun on her face. Giddy, she swam toward shore. I did it!

She plopped onto her towel, knocking sand onto the perfect square of his blue blanket. “I was fine,” she said.

He brushed the sand away. “You were crooked!”

“I wasn’t!” She kicked more sand but missed his blanket. She hadn’t even wanted to jump—had only done it to please him.

“It’s impossible to keep still when you’re jumping from that height.”

“It’s not. I’ve seen people do it. You just jump straight like a…like a..a…a thing. A straight thing.”

He was spitting and his face had gone red and so she went to him, laying aside her own agitation. She was an expert at that, laying things aside to smooth the easily frayed edges of her brother’s existence.

“Shhh…” She sat next to him, not touching—he hated touching. “It’s okay. I know what you mean. I was crooked.”

His hands were balled into fists and like the rest of him: grimy. Bathing was another thing he hated. Getting wet. He begged to come to the lake but only to sit in the sand and watch the loons, never to go in, not even a toe. He couldn’t swim.

He shook his head over and over. Her imperfection was a wrecking ball to the delicately laid blocks by which he built his world.

She didn’t want to. It had been scary. And this time it would be worse because she’d stand up there knowing she would fail. “I’m not good at going in straight,” she said.

She scanned the lake, desperate for a loon to call out in that sad, haunting voice her brother never failed to respond to. But there wasn’t a single loon.

“You just keep your body stiff.”

She sprawled out on her towel, closing her eyes and letting the sun seep underneath her cool skin. Her head swirled in that way it did before falling asleep.

Why did he sound so far away?

She bolted up and saw him, a tiny boy on the edge of a cliff.