Letter from the Editor, Issue 39: Kim 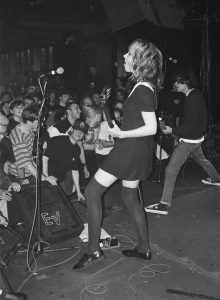 The snow has a habit of pulling the world in closer, making your mind claustrophobic. Here on the eve of 2020 in the rusting upper midwest, I can’t help but feel that this claustrophobia is a good thing. I think you and I probably need a few less voices shooting around our ruined minds. Years ago, as 2011 turned to 2012, we decided to create a lit zine to combat the brooding techcapitalist storm we felt approaching. As we thought about the type of reader we wanted to have, we hammered out a manifesto to make hypocrites everywhere proud. We wrote–

the writing on Literary Orphans is an exorcism of the mind of its contributors, and reading the work here is putting up your fists and getting confrontational with solitude–solitude in a world where neon signs are out and LCD billboards are in, a world where you can’t think for following because everyone is doing all the thinking for you.

A few months ago, I walked into a Walgreens in the heart of Chicago’s loop–right on State and Madison, trying to itch my pop addiction before heading back into the email mines of work. As I stood in line, awkwardly clutching several sticky and expired two liters in my arms, I felt a hot bluelight glare engulfing my glasses from the left. Looking over in the slowest Wes Anderson head-turn you can can imagine, I saw that they had replaced the doors of their fridge aisle with at least a dozen giant LCD screens. The fridge doors, reader. The fridge doors are giant LCD billboards.

Let me explain. Instead of glass showing you what’s inside, there is an opaque LCD monitor in the shape of a fridge door. With a handle on it. The monitor is broken down into little invisible grid compartments, with an “artist’s” recreation of the product behind the door in that little compartment slot. Do the little product recreations just sit there stoically? Of course not. They dance for you babe. They flash their bright advertisements at you, tempting you with the sexiest Diet Coke bottle you’ve ever seen in your ridiculous little life. And let me tell you reader, it is the sexiest one you’ve ever seen. It bounces and shakes the Charleston in its little go-go cage, beads of photoshopped sweat tracing an outline along the curves of the bottle through its chilled animated exterior, trying to obliterate the animated Pepsi bottle a few inches away. The Pepsi bottle is of course twerking (Pepsi is always more hip, let’s be honest) just as fanatically in competition. Who wins the dance-off? Well, you win, dear reader.

I’m kidding, you lose. In fact you’ve already lost. They’ve got face-tracking cameras in there somewhere, giving the companies data on how well the ads they are paying Walgreens for are doing. We’re definitely in hell.  I’m sure in 2030 I’ll be writing about the next level of this techcapitalist hell we’ve followed Dante into, as the LCD fridge thing will be in all of the USA’s glorious supermarkets.

Let me tell you about Kim Shattuck, who died this past October (10/02/2019) right before The Muffs’ final album released, at age 56. I know most of you won’t know who either Kim Shattuck is or The Muffs, but she matters and they matter. Even if this style of pop-punk/90s alternative isn’t your thing, even if The Muffs will be a small blip in the history of music. Even if The Muffs end up mattering to no one but me in 30 years.

How to tell you about Kim Shattuck and why she matters? Well, she was recruited into The Pixies in 2013 when another famous Kim left the band. A few brief shows in, she got told off after she jumped into the crowd during a set in LA.

When I got offstage, the manager told me not to do that again. I said, ‘Really, for my own safety?’ And he said, ‘No, because the Pixies don’t do that.’

It was not long after that she was kicked out of The Pixies for “being too enthusiastic.”

Kim Shattuck came from a family who had a history of ALS (amyotrophic lateral sclerosis). She knew it would always be a possibility in her life. This disease, that famously killed Yankee’s player Lou Gehrig, is a neurological disease that impacts the brain and spinal cord. The victims of this truly shitty disease suffer from the degeneration of their motor functions, speech, and organs as the disease progresses. Kim’s hand felt funny after a show in the spring of 2017–it kept feeling funny. In the two and a half years from the onset of symptoms, Kim wrote and recorded an album that released on a small indie label a few weeks after she passed.

This push to record, this push to make art as your body fails you is one of the few thoughts persisting in your editor’s claustrophobic mind this snowy morning, Dec. 31st 2019, as I put the final touches together on this issue. I think that that push is beyond heroic. I think, in fact, it may be the only thing that matters when it comes to art. I’ve been thinking about some of the writers we’ve published who have died between when we wrote that manifesto in 2012 and now. I have been thinking about some of the writers we didn’t publish who have died between then and now too. I miss them and their voice in the community. I know that many of you writers out there are writing with this idea that one day what you write will be sold on bookshelves. Maybe on bookshelves with little LCD doors covering them, who knows. You may be writing with this idea that in 30 years your work will be taught in classrooms across the world. I hope each and every one of you gets to experience that, because it means more people will see your work. I know that many writers–most writers–will not. What I want to convey, and what I want LO to convey from now until it too disappears, is that dancing animations on LCD screens and lists bought with gift cards in the NYT, or indeed what this asshole editor thinks is never validation for your art. I think that the art, if it impacts one person–even the artist themself, validates itself.

Despite the cynicism soaking this letter, I have high hopes for the year ahead. I hope to see, as the world becomes even more increasingly consumer driven, that in the face of that consumerist world people still push to create regardless of the outcome. I hope that instead of breaking our backs to publish and sell writing we instead continue to break our backs to build a community around us of those that will read and open their hearts and change their intrinsic relationship with the world. I do not believe that the next short story by legends like Alice Walker, Margaret Atwood, Neil Gaiman, or whoever you love is somehow empirically more worth reading than the pieces in this issue or in the dozens of lit zines publishing new fiction this month. I believe that anyone can write about the world around us and fundamentally change a reader’s heart and mind.

It’s 2020. You’re in hell. Go out and make a community with others, rather than trying to create a new writing job for yourself. You are the audience that matters.