Just the Two of Us by Denis Bell 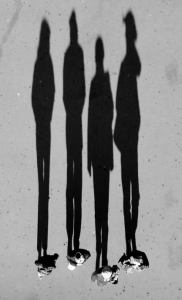 Yes, there are two of us. Julie and Sarah. We look alike on the outside, but inside…  Sarah is like cotton candy—after you’ve stuffed yourself with it at the fair.  Laughs a lot at pictures of cats and babies that she sees online, even has her own Facebook page. Julie doesn’t do any of that crap.

Julie the cleverer of the two. Julie knows everything that Sarah knows and a whole lot more besides. Enough to know that Sarah is wacko! A real nut job. Brushes her teeth and washes her hands about a hundred times a day. Wipes the posts in the schoolyard. Weak. Lets the brats poke fun. Worries herself silly about stupid things like the world oil situation and the fate of the panda population and the premature deaths of loved ones.

Julie never worries about anything and she’s not big on furry things and she spits on clean. But then again, she’s not the one who is crazy. So she just watches it all from afar and she bides her time.

And every day she grows a little stronger.

She used to be so sweet, they say.

So here she is in the background for yet another “consultation.” Julie. Perched on a wooden stool in a corner of the room like the place they put her after she beat up that kid. Sarah is back home locked in the cupboard underneath the sink, where Julie left her after she tied her up and gagged her.

There is nothing better to do, so Julie runs her fingernails up and down her arms as she rocks back and forth on the stool. Bloodies them a little, because she hasn’t cut her nails in a while. Twists her face into a pretzel. Thinks about dirtying herself because she wants to give them shit. Except that it doesn’t feel like it’s in the cards right now so she just sits rocking on her stool.  Back and forth she goes, back and forth, in tidy groups of threes, back and forth, raking her arms with her nails once in between each round, because parity is all and nothing works for her like odd.

After a while she grows bored with this game so she gets up and wanders into their little circle. She is invisible to them so she can go just about anywhere she wants. And hear some of the whispered conversation, because when you’re invisible you’re deaf too.

As they’re about to get into the car the yelling and the twenty questions start up.

WHAT DID YOU DO NOW?

If you carry on like this they are going to lock you away. Is that what you want?

A single parent nightmare. Every day a struggle.

Why do you do this to me?

But real mothers love no matter what, and on the way home they stop by Dairy Queen and her mother buys her chicken nuggets and a shake and the two of them share it. And for a short time there is only Mom and Sarah.

Denis Bell is a writer and a professor of mathematics based in Jacksonville, FL. He grew up in London, England and studied at the Universities of Manchester and Warwick. He has received several awards for his scientific work, including an Outstanding Scholarship Award from the University of North Florida and a Research Professorship at the Mathematical Sciences Research Institute in Berkeley, California. A spinner of small tales for many years, he started publishing fiction around seven years ago. His writing has since appeared in many literary magazines and journals. An illustrated collection of his short and flash fiction, titled A Box of Dreams was published by Adelaide Books in 2017. 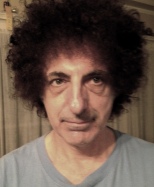