Jane Deaux at The Hair Place by Benjamin Soileau 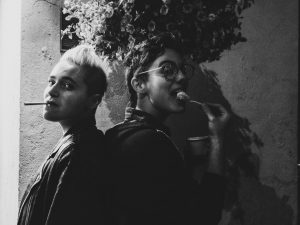 I got a case of the fedups, me. Don’t nobody practice manners no more, no.

Listen. When Rita wrapped up what Katrina started, me and my husband said, foot on this shit, and ex-patrioted ourselves to the Pacific Northwest. Stumpton took us in like we were the Prodigals, and I hug the town back best I can, sitting on the committee for Lumber Daze, and serving my gumbo at the every year Stumpton League Thanksgiving Raffle. You’ve seen me with my hunk of husband shopping local at the farmer’s market, and you for true heard me Friday nights up at the stadium yelling my fool head off. Dig in, Ticks!

So, my two cents got to be counted, yeah.

One of the perks about living in God’s country is the legal love weed. It helps my arthritis and makes the little everyday things like washing my husband’s holey underwear and dusting shelves more fun. My man takes it for his night terrors and it helps put the squeeze back in his old box.

Recently, my sister finally took her butt up here from Dulac to visit, and I thought it would be fun to take her to the store for some left handed cigarettes. I had to be sneaky about it though, since Dookie’s old fashioned that way, and needed some tenderizing first.

I took her from the airport straight to Love Bird Point to see the mountain, her not used to anything that wasn’t flat as a pancake. We plucked some strawberries and then off to the wine shop for some sweet tooth later on. Now, the wine boutique is in the same shopping center as a love weed store I hadn’t been to before, which was part of the plan, since if we went to the one by my house, they’d all throw up their hands and say, welcome back, you!

I figured to play dumb, thinking if she saw it all laid out like in the grocery store then maybe she wouldn’t be so scared of it. “What’s this?” she said when I opened up the shop door for her. I said, “I don’t know, D. Let’s go see.”

The little fellow at the podium up front pinched the air like a crab and asked for Dookie’s ID. No hello. No nothing. She lifted her purse the way she does and looked at me like she didn’t know whether to shit or chop onions. “Just show it to him, D,” I said.

He rattled off the specials, such and such percent on flower. “I don’t see no flowers,” Dookie says. “What’s happening?”

Right then, another fellow come out the back through a curtain, talking like a sailor. F this and f that. I think it was about then, Dookie saw one of the posters they had up of a skeleton smoking a reef and all them black light kinds of dope worship.

“Oh, uh-uh,” she said and crawfished herself back outside. I could see she was already up on her throne, ready to fling her little lightning bolts. “You still on that stuff?” she said.

“We having such a fine day,” she said, crossing her arms. “And you gonna take me to a place like this. What? We going to the tattoo parlor next? Maybe rob a bank?”

I threw up my hands then and just took her on home.

Now, we don’t have us any grandbabies, but I should have figured with D. She had a couple glasses of that wine and found her way into the tin where my husband keeps his edibles. He found her while she was on her second chocolate, and told her it was his special made prescription medicine. He tried to get it out her hands but she fought him off and finished it, saying how ain’t none of us spring chickens and it’s nothing she couldn’t use herself, probably. They so good.

So we each had one too and got to preparing Dookie best we could without telling her. Like I said, she flings those bolts. I tried to make her drink some grapefruit juice, but she wasn’t having it, swinging them elbows and gulping down another glass of wine. We finally got into a game of rummy and after a little, she starts giggling at her hand, like them Jacks she’s holding are acting couyon.

“What you talking about, girl?” said my husband. “That ain’t no rummy.”

“I got to dance, me,” she said, scooting back. She asked what we had on, saying it’s the best music she ever heard. “That’s the tape you gave us for Christmas, D,” my hubby said. “You don’t remember? Porky Poche and his Cajun Playboys.”

Dookie peeled herself up and went into the living room. We could hear her in there, stomping to that fiddle, hollering how good the carpet felt on her bare feet. My husband told me the name of the edibles we ate was Diesel Bear Claw, and we started into laughing, pawing each other’s face and cutting up because it really did feel like we had these two pound, fuzzy hands on. It’s just amazing what they can do nowadays.

When we went to check on Dookie, she’s on the carpet with her legs thrown up on the couch, wearing just her underwear. “Oh, shoof,” said my man. “Girl!” I said. “What you doing like that?”

“I’m having a stroke,” she said. “I got to stay just like this or it starts back up again.”

“You ain’t having no stroke,” said my husband.

Me and my man stood there until he swatted the air and said, “Foot on this shit.”

Dookie locked herself up in the bathroom after that for most of the rest of the night, worrying through the door, wanting to know what kind of prescription it was she ate. My man didn’t want her worrying and told her it was just some super duper fiber, and we left her talking jibber in the bathroom.

And then we woke in the wee, smoke detector screaming, and Dookie still in her underwear, scrambling around the kitchen because she forgot some bacon in the oven. She put all of it in there too, even the couple packages we had up in the freezer. Lord.

What do they say? If you want to make God laugh, then make some plans. I know that’s right. I’d be lying if I said we didn’t get some amusement out of it, but I can assure y’all that it ain’t the way I envisioned my family reunion playing out.

I went straight to that weed store from dropping her off at the airport to give that little fellow a piece of my mind. I said they scaring off potential customers, that they got to treat people with respect, especially them elders. “Babe,” I told him. “You fanning the flames of your own stereotype.” I let him pick a candy from my purse, but I can’t say I got much hope for that one.

The man at the wine boutique, Mister Lou, he makes you feel like the queen of Sheeba when you get a bottle. He got that nice European music playing in the background, and nothing like any skulls and black lights anywhere, but tasteful things up on the walls. Mister Lou, he holds each bottle like it’s a relic. He makes you feel like that grape juice will make you a better person.

Now what if they filled them love weed shops with Mister Lous? Just think how many Dookies out there can be turned on if love weed workers fancied themselves up a little. It’s not that long a row to hoe y’all, but it starts with a little yes and no ma’aming.

Otherwise, we all just might as well go back to the dealer. And Lord, I’d hate that. My guy had a rooster loose, and it liked to attack me every time walking to his front door. But at least that fellow had manners.

But get this. Dookie calls me up yesterday wanting some fiber cookies. She said she’s been regulating herself silly with supplements, but it don’t nothing work like my husband’s prescription grade stuff. Can we please send her some? She’ll pay whatever. Ain’t got but one oar in the water, that one.

Benjamin Soileau is from south Louisiana. His fiction has appeared in Prairie Schooner, Colorado Review, Opossum, Grist, Louisiana Literature, Bayou, Superstition Review and many other journals. He won the 2018 Rumble Fish Quarterly New Year’s Writing Contest, and is a special mention in The 2020 Pushcart Prize Anthology. He is a Stay at Home Daddy-O in Olympia, Washington. Reach him at bsoile2@gmail.com 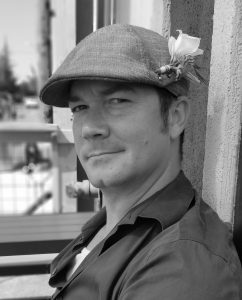