I spoke with Judy Ryan Hall about her latest work, Max Runs—

Stay-at-home mom, Rebecca Logan, is struggling after her youngest, Max, is diagnosed with early-onset bipolar disorder following an unanticipated suicide attempt. Her eccentric older sister, Sarah, an ER doctor, is convinced that she knows what is best for Max due to her experience as a physician, despite his mother’s diligent care and the advice of Max’s own psychiatrist. After shocking family secrets surface, Sarah kidnaps Max, and Becky embarks on a frantic journey to save them both.

Our conversation takes a deep-dive into discussion of mental health, specifically Bi-Polar Disorder, and the impacts that can have on a family. Take a look below! 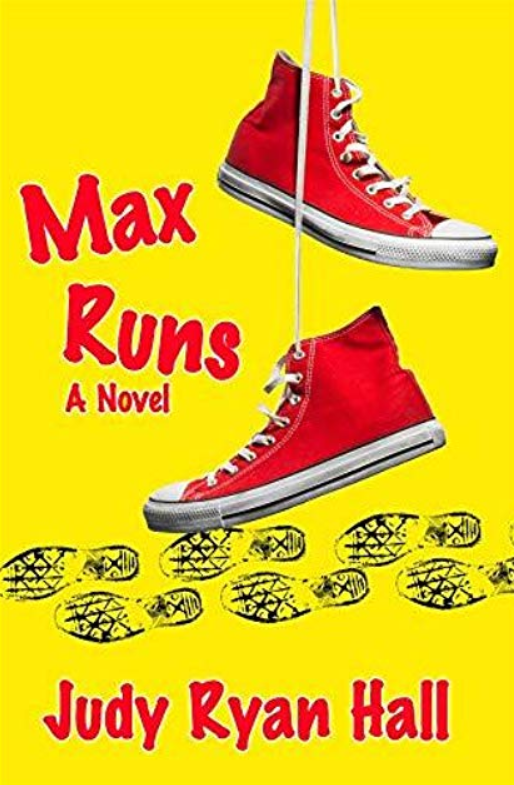 Mike Joyce (MJ): What was the inspiration for writing a Max Runs?

Judy Ryan Hall (JRH): My daughter, Sammy, has early onset bipolar disorder. She was a lot like Max.
Although her first suicide attempt she was younger – 8.

JRH: Both. I see my role as a mother of a child with a biologic mental illness as a fighter of stigma. It’s my job to make the world a better place for her by making people see that having mental illness doesn’t make you a disposable person. I have bipolar disorder, too, so I made Becky, the narrator, not have it. I want people who have kids with mental illnesses to feel like it’s something they can handle, even if they have no idea what to do at first.

MJ: One of the things I found most poignant about MR, was the way it showcases how Max (and Sarah’s) mental illness impacts those around them–the exploration of those feelings they experience

JRH: Mental illness is a family experience. Even for me, and I am pretty high functioning, I would find going it alone difficult. It’s easy to give up on people who can be hard to be around and there are times we all want to run away – even from ourselves! But I hope that Max Runs shows that a family can figure out how to function and use the resources available in the world.
Many people try to handle illness alone, but it takes a team, especially with a small child.

MJ: In the novel, we go between Max and Rebecca’s perspectives–in a chronological framework. What was the inspiration behind the formatting in this way?

JRH: It started very differently. I was going to include a whole generational aspect, looking at Becky and Sarah’s mother. Eventually I took that part out and am writing it as a novella. It was too different. But I wanted to give the reader a sense of time and space and these months before the Boston Marathon bombing are also a time for extreme mania (fall) and then depression (winter) and rebounding mania (spring) for many people.

Most people with bi-polar disorder  attempt suicide during manic episodes There is a 20% mortality rate. Especially for bipolar disorder type 1, which Max and Sarah have.

MJ: When you were diagnosed, did you have to figure things out on your own at first? I can imagine for some, in families that don’t talk about bipolar disorder, it can be difficult to piece things together without that guidance.

JRH: I was actually given my diagnosis after Sammy. I was reading about it after her diagnosis and was like, wow, this is so familiar. Because I was severely abused as a child, no therapy had seen past my PTSD to see the bipolar disorder. And I was born in 1971 – early-onset bipolar disorder wasn’t even diagnosable until the early 2000s. It wasn’t a recognized illness.
I lived a very crazy life and compensated in many unusual ways before I finally found a medication cocktail I could handle. Now I have a therapist and psychiatrist who specialize in bipolar disorder.
I knew something was off with Sammy, though, and I recognized it. She was, as I was, too intense. Too deeply into our imaginative worlds. I started her in therapy at 5 but she didn’t get diagnosed until 7.

MJ: This reminds me of how in MR, parts of the book deal with tensions between medicating and not medicating, could you talk about why it was important to write this into the plot of the book?

JRH: Sarah is a doctor and a big sister and she thinks she knows more than even Max’s doctor. Many people are opposed to medication. Some think children shouldn’t be medicated, but I think that’s ridiculous. If a child had diabetes, you’d never question using insulin.

The problem with mental illness is that it isn’t quantifiable and many of the medications have hard side effects. Max gains a ton of weight when he starts the meds and we see no real change in his behavior. That can be frustrating and feel like you’re fighting a losing battle.

It took years for us to see a real difference with our daughter and even with meds and 12 years of pretty intensive therapy, she still has manic episodes. But she’s 1000x better than when she was like Max.

Yet it also requires constant vigilance. I am 47. I will be on meds the rest of my life. My daughter is looking at decades of meds ahead of her. It can be tempting to stop and let mania just happen. Almost every person who has bipolar disorder that I know has gone off meds at some point and it’s never pretty.

MJ: What would you say to those who think that taking medication makes people into lesser versions of themselves? Or “zombies”? And how prevalent do you feel that sentiment is in our society?

JRH: Well, part of it is understanding that there is more to it than medication. I take much less medication than many people, for example, because I don’t like how it affects my thinking. But if I take the meds I needs and eat well and exercise and go to therapy, I can manage. It is hard to do. It’s a constant juggling act because the meds make you crave carbs and also make you tired. Your body is screaming for a Big Mac and Netflix and you should be eating fruits and vegetables and going for a walk. Sometimes the Big Mac wins.

MJ: It’s a lifestyle change along with the meds?

JRH: Yes. That’s part of why running is a theme of the book.

Although personally I swim. That’s why my blog is called Voluptuous Mermaid.

MJ: What was the most difficult character to write in Max Runs?

JRH: Jake. He comes across as such a jerk. But it’s because he’s keeping secrets and feeling guilty.

MJ: The easiest to write?

JRH: Max. By far. I was just like him and so was Sammy. I really get him.

I guess Becky was a little hard to write. Because she doesn’t get it and I did. I based her on a friend of mine. A stay at home mom who is super involved in the PTA. I imagined what it would be like if she had my kid.

MJ: One of the things I appreciated a lot about MR is it dives into the day-to-day, the reality of the situation, and educates those who don’t have bipolar disorder. For instance there is a point in the book, when we learn that one way a manic episode may manifest is in the bedroom.

JRH: Yes. Hypersexuality is a huge part of bipolar disorder, especially type one. And that can be unsettling in children and scary for adults.
For myself, I have sometimes wished that that aspect of my illness would go away the most.

I feel overwhelmed by it. I actually wrote a story once where my vagina was this big monster. It can feel like sexuality takes you over. From the outside that can seem fun – and it can be at times – but more often it is frustrating because life still has to happen

MJ: When thinking about intersectionality and mental health, do you feel that bipolar disorder affects men, women, and nonbinary folks differently?

JRH: Well, I didn’t include this in my novel, but my daughter is transgender. When she first started acting out, a lot of it was chalked up to boys being boys. But she’s a girl and I am definitely female, so I think the violent behavior can affect women as much as men. I will say that my father, who likely had bipolar disorder (he was terrified of psychiatrists – in a manic episode at 13 he broke his mother’s arm – it was 1940. They wanted to lobotomize him – it was very in vogue at the time – so he never got treatment) was extremely violent. But he didn’t have meds and therapy and the stigma, as bad as it is now, was much, much worse when he was young.

So maybe testosterone added fuel to the bipolar fire, but I think that the experience of bipolar disorder can be intense for anyone. And, of course, I’m writing from my experience. People experience bipolar disorder in many different ways. For example, now, when manic, I am more likely to write or repaint my house or make dozens of crafts.
I wrote the bulk of this book while hypomanic and in 3 weeks. Then it took 2 years to make it make sense. My sister is a huge help to me with editing. I am dyslexic. My spelling is awful. She reads almost everything before I send it out. But none of the characters are based on her, really.

MJ: Did you involve your family in the process of writing and editing? Discuss it with them at all?

JRH: Yes. When I write about my kids, I always read them the parts about them and ask permission, even if it is fictional. My older kids are very private so there is much less about them in my writing. Sammy loves me to write about her. I wrote an article about her transition that went viral and then was purchased by a textbook company and she loves it.

My husband will listen to me read aloud, which is a big part of my editing process.

MJ: What would you want your readers to take away most from the book?

JRH: Mental illness is just like any other illness. It isn’t a moral failing or something to feel ashamed of. People with mental illness can do anything if they get support. My daughter wants to be the first transgender bipolar woman in space. As long as she takes her meds, I’m good with that.

JRH: Max’s suicide attempt is very shocking because he gets very angry over what many adults probably see as nothing. But when you have bipolar disorder, sounds and textures and tastes can be amplified, especially in children. We tend to dismiss how difficult the world is for children and idealize childhood as this great time when we had no bills. But the reality is that children have little say in their lives. If someone is irritating an adult, they can walk away. Children often can’t. So in the scene with Max’s suicide attempt, we see all the “small” things that build up to his explosive and impulsive decision to attempt suicide. I think from Max’s perspective; it makes a certain amount of sense. The world is very overwhelming and unfair in his eyes.

You can find Judy Ryan Hall on Twitter. Her book, Max Runs is available online at Barnes & Noble, Amazon, and elsewhere.