In the Hospital, Just Before the Explosion
by R.O. Land 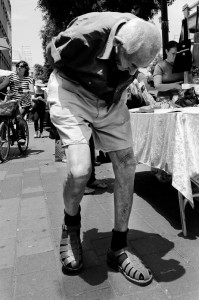 The noise in the room got even louder, and I felt certain that something was just about to break. Some children yelling, the sounds of pounding feet, a few adult voices calling out to each other, saying “Walk, walk” and then, a second later, “Where did he go?” And then a line of sound that I could only hear about a half of, as I put my hands over my ears and tried to imagine I was back in my therapy room, with nothing on the walls, nothing but a small observation window through which only one person, standing, could see. And then I lost the thread of the specific words, and let the sound enter me fully, let it travel into the base of my throat so I could feel it vibrating at the base of my neck. I felt a hunger in my stomach, a panging slice that seemed to enter my body along with the sound, that traversed the pathway from my ankles to the space between my thighs. Suddenly I was starving everywhere, and the need for food flooded into me like the desire for oxygen, and I gasped because I couldn’t bring myself to reach it, and I spun my head in the search for some edible air.

I couldn’t breathe, and I started to hear once again the pounding in my head, trying to force myself to take a breath in and stand completely still, make the danger fade away like the faint light and the shadows near the administrative floor. I should be able to meet the challenge, I told myself, somewhat ridiculously, like I could find a way to master myself. It didn’t work—it’s too hard to be your own patient, I guessed, and it wasn’t like I was the goddess of self-restraint.

To distract myself, I tried to describe the sound to myself. I put my hands out and tried to map it, tried to chart its hills and valleys with my hand. I’d be the conductor of the noise, I told myself—I’d master the sound and perhaps get it under control. It was the kind of noise that one feels one simply can’t stand anymore, that there will be a lull, there must be a lull, in a minute, and then the noise continues, and you realize you haven’t gone crazy or at least you haven’t gone crazy yet. A rocking came from the other side of the wall, like someone was slamming a rocking horse into the wall or a piece of glass, into a wall that was too thin to withstand it.

Inside my hiding place was a big curved plush chair that was peeling off the corners, so you could see the gray underbelly; a paper mache mountain that stood about shoulder height and was glued together with big clumps of masking tape; two big cardboard posters from what looked like a medical presentation gone wrong; and three—no, four—metallic filing cabinets with clear insides. I could see an old computer in one of them, probably a version from twenty years or so ago, and inside the other a series of old videocassettes with some cartoons I didn’t recognize. On the floor lay bits and pieces of torn-up cardboard and the butt-ends of plastic pens. It looked like they had exploded out of nowhere, like an explosion inside the room had come and gone, and everyone had been too busy to clean up.

I listened to the noise, trying to find some order in it, scanning the room to see if that would bring some insight, or some quiet at least. For a second, I heard nothing, only undifferentiated noise and a small boy’s voice going “Oh, oh, oh!” like he was either mildly injured or surprised. I looked at the two kid chairs and one adult chair in my little room, and the table that was probably meant for a child of seven or eight. I imagined who might have been sitting in those chairs, and how those examinations might have gone, perhaps with one child sitting surrounded by two adults trying to do their best by him, perhaps with a sibling looking on.

Then, in another wave of silence, in what I would later recognize as the eye of the oncoming storm, if I were going to call this the storm and myself the witness, I heard the patients. They came to me in a quiet premonition, a more specific sort of signal in the otherwise heavy, relentless wall of sound.

“Get inside here!” I heard a mad voice crying out. Then, a little louder, “No, in here!” I felt irrationally irritated, by the sound of their voices, breaking up the sound into certain words that I had to focus on.

“Are they sucking it out or…”

“Well, they’ve got two ways of doing it. One is sucking the poison out, and one is picking out pieces of the stinger….”

“Well, yes, but the question is then, what are we going to do?”

“Yes, very much so, why do you think we’d be messing around otherwise?”

“Sure, but I mean maybe we should sleep on it first. A little rest for the”

“Who do you think you are, losing your brother, talking to me that way…”

“Put your name in the book—who are you looking for?” The woman’s voice rang out over the others, arrow-like, with a dark tone that told me she was one of the businesspeople around here.

“No, one, Ma’am, it’s just—” then the harried, somewhat bitter voice of a younger man, with a little half-apology—

“I told you not to do that—there are other children—throw that away! I told you…”

It was difficult to tell whether I was hearing the slapping of hands or rather a filing cabinet being shut with a snap. I had the sense that I was only one of two hundred people in this space, waiting for an exit to appear or someone to claim immunity from the process, to say that they were the only ones who should be allowed to push through the emergency doors, which were probably not alarmed anymore anyway, and find the space to take some oxygen in through their open mouths, and breathe like dogs, like children underwater, desperate for a perfect drop of air.