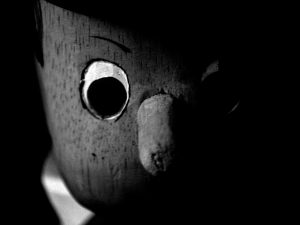 You stand in the space between the door and its frame. Paint peeling. Streaks of white patched and pulled from the wood. The dim light of the hallway. The only light that’s on. The boy sleeps, or he pretends to. His blankets are thick. Drafts of wind from creases in the window whisper. You are so small at night.

This thing you’re holding drips. Spilling between and over the sides of your hands. It reeks of days gone. Damp and raw on both sides. Some crude mass of hair and coat and flesh. Some version of a would-be prize of a hunter somewhere. Found under the bathroom sink. How did he think you wouldn’t smell it. It’s missing its bones and a head. This is not some pelt, bought for small change at some shack that calls itself a lodge or store for the outdoors.

You can’t tell what this came from. Some vague idea of a squirrel or rabbit or some other rodent. Torn from itself. How he caught one of these, still, you don’t know. A boy of twelve. You picture whatever it is, wriggling in busy hands. Squeezed, jerked, shuddered. Stopped, still.

Nausea. No hands to bring to your mouth. Rush back to the bathroom. Hold this thing away from the toilet. Heave. Gushing chunks of some pallid shade of orange. Mouth gaping. Drip, hock, spit. Gape some more. Breathe. Set the thing on the floor by the bathtub. Wash your hands. Liquid soap that doesn’t feel like soap. Wash out your mouth. A gag of mint and vomit. Burning. Spit, breathe. Pick the thing up again. Back into the hallway with the dim light. It sputters silently. Back into the space between the door and its frame. He sleeps, or he pretends to.

Hoarsely, you ask into the dark, what is this. The boy is still. He breathes to no rhythm. There is only a silence. A breath withheld. What is this. You are his mother. You know he lays there awake. Hiding. So, again, what is this, Peter. What am I holding. The boy stirs. What, he whispers. Mom.

You found the knife before the body. Washed, drying in the dish rack in the kitchen. You asked him if he used it, he said he did. Just to spread some jam on toast. He’d left for school, catching the bus by the gas station, a half a mile from the house. You’d said, bye honey, have a good day. And when he came home, you asked him why he’d rushed from the house so fast. He hadn’t been late. You stroked his hair. Told him you’d said ‘have a good day’, that he’d just left without a word. He mumbled sorry, something about homework. Went upstairs, mumbled another something.

Sundown. You went upstairs to ask him about the rag you found in the laundry. Passed his bathroom. The stench burrowed. Found a home. The bottom of your stomach. The source beneath the sink, sopping.

You send your voice alone into the dark again. Peter, did you leave this in the bathroom. A voice comes back. Mom. He pretends to wake up slowly. Pretends he emerges groggily from deep sleep, in the pubescence of night. The old age of evening. He pretends he does not breathe rhythmically in rest. That he sleeps silently. That his head, neck and limbs never stray from the heat of thick covers.

I won’t ask you again. Your voice has started to quiver. Speech, a tremor from the womb of your chest. Your throat, a faucet. Stomach straining to recover. Legs strung uselessly together by tendons. Those little things forgotten by those weak in the knees.

Peter reaches for the lamp on the nightstand. Tugs a plastic chain. Glow in the window of a bare room. Weak, sinking floorboards. White metal cot. Black wooden nightstand, scratched. Lamp. Naked walls, pictureless. A cavern in a house without neighbors. A home alone, swallowed by fields of weeded grass. Voices taken by the trees of the close woods. Etched in crooked rings.

The boy looks like you. But he is graced with a smoothness that eluded you as a child. Bagless eyes, the brown green of moss. Hair without frays. Skin without marks. Peter is beautiful. Handsome, dark and candescent.

He says to you, I just wanted to try hunting. The other boys at school do it. Their dads take them, and they camp. He nods to the window. An exchange of light and wind and sight. There is something unspoken, grey and figureless and untouchable. A tremor in his chest to mirror your own. You can feel it too. Some untold weight to be excavated. Why didn’t you tell me, you find yourself asking him.

His dark hair is neat. He rises from the bed as if never settled. Angelic. I didn’t know what to do with it, he says. But his mossy eyes do not meet your own. I couldn’t figure out how to skin it. I just thought it would dry. And I realized it wouldn’t, and I didn’t want to just throw it away, like some…

The space between words. He is just a boy with friends with fathers, you tell yourself. With a hole in his heart where his own should have lived, and spoken of the outdoors. He is a boy of the moonlit northwestern woods. Raised in captivity. 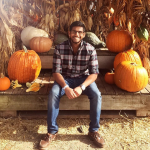