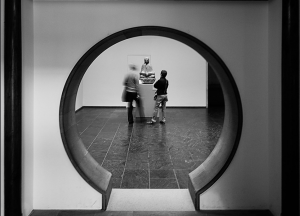 The hole in the floor was bigger this morning.  Big enough now for a body to fall through if one wasn’t careful.  I could see it from the bed, the sunless morning light illuminating the same gray, murky emptiness of it that I had first seen a few days before.  It looked like a piece of the sky had fallen into our bedroom.  I still couldn’t tell how deep it was.  The hole swallowed all the light it could without revealing anything, its depth, how it got there, its purpose.  But whatever it meant, I knew it needed to be filled, like any hole I suppose.

I got out of bed, shrugged into my bathrobe, and tiptoed around it.  I’d have to mention this to Rachel, much as I hated to.  Unless, maybe she had already fallen into it, and was down there right now trying to find her way out.  I listened but heard nothing.  No, that couldn’t be it, besides, I could smell the coffee brewing down the hall.  And she couldn’t, or wouldn’t, even acknowledge the damn thing before, just looked at me and smiled.  At least I think it was a smile.  I hadn’t seen her smile for a long time, so it was kind of hard to tell.

Let her fall in then.  She couldn’t say I never warned her.  Maybe then I can find out how deep it is.

After I peed, I splashed some cold water on my face and stared into the mirror.  Nothing, not even a shiver.

I slapped my face, hard, and watched the red blotches grow.  Didn’t feel that either.  My natural curiosity overtook me then so I looked at the guy I was staring at more intently, and wondered what he felt about these strange developments.  But his eyes revealed nothing.  They had the same gray, murky emptiness of a hole.  Well I guess that’s for him to figure out I thought, and shrugged.

Rachel was next to the coffee maker when I walked in, leaning back against the counter, cup in her hand.  She put it down and watched me, a faint grin on her face, then nodded towards another steaming cup next to her.  “Morning,” she said.

“Morning,” I said back, surprised to see she had poured me one.  “Thanks.”  I went for the cup, but stopped abruptly a few feet short of the counter.  I couldn’t believe my eyes.

“Jesus Christ!” I gasped.  “Not another one!  What the hell’s going on here?”  I stared at the hole at my feet, then back up at Rachel.

I kept looking at the stupid grin on her face.  She knew about the hole.  This was a trap.  She was hoping I’d fall in.

“No?  OK, I could go for a new fill.”  She took the cup, my cup, and went into the living room.  Just like that, without another word, about the hole, about my cup, nothing.  Unbelievable.  I watched her go, watched the back of her silk robe, cinched tightly above her swaying hips.  What was she trying to say?

Jesus!  I could see the new hole from here.  It was a big one, in front of the couch where she now lay sprawled, robe sliding off her thigh, pretending to be interested in a magazine.  She had walked right over it, like she knew where to step, knew its secrets.

The holes were multiplying, that much was clear.  Were they in league with her somehow?  I didn’t know, but I did know that if I didn’t put an end to this nonsense soon, one of them might get me.

“Rachel, listen to me!” I demanded, liking the right tone of authority I heard in my voice.  “This has to stop!”

She said, “I’m through listening to you Tom.  I can’t believe it took you this long to notice them.”

What the fuck!  She’s known about these holes for a long time, and couldn’t tell me?  After everything I’ve done for her.

“Rachel, I don’t have time for this now.  I’ve got to get to work.  We’ll talk later.”  I walked away, barely keeping it together.

Son of a bitch!  Now there’s a hole blocking my way back down the hall!  I turned around quick, breathing hard, and saw the kitchen hole growing bigger too!  I looked over at Rachel and damned if she wasn’t smirking, watching the fear and confusion she probably figured she could see on my face.  Calm down!  Don’t show her anything.  Be a man, they’re just holes.  What’s a hole but an empty space without meaning?  A void.  They don’t matter in the least.

I took a few steps towards her, fire in my eyes, angry blood pumping hard.  It felt good.

But the hole by the couch grew towards me, stopping when I did.  It was two feet away from me, menacing in its inscrutable emptiness.  What the hell did it want?  I looked around wildly but could only see one way still open to me.  The front door.

I dropped to my knees and called her.  Pleaded with her to make them go away.  I think I said I loved her.  That we could start over.  That I’d listen to her, because she was the most important thing in my life.

She didn’t seem to care.  She rose from the couch and glided towards me.  She stood there, right in the hole somehow, on top of it, and looked down on me.  “You have two choices,” she said.  “Leave now while you still can, or stay here and let the hole swallow you and your empty feelings.”

Dumbfounded, I looked up at her, standing there all high and mighty, in control of the holes, and realized that she would never understand me.  But I knew now where all my logic disappeared.  And why it wasn’t even reaching her.

Bob Lorentson’s stories and poems have appeared in Drunk Monkeys, The Menda City Review, New Pop Lit, Sleet, and many other terrific publications. He is currently working on a third novel, The Agnostic’s Progress, and thinking of starting a Knut Hamsun fan club. 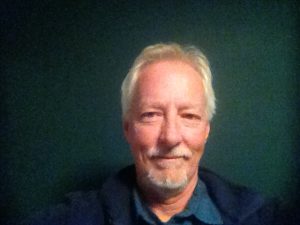