The Heap by Scott Lambridis 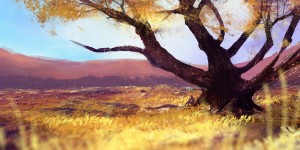 After a day spent shoveling the heap into buckets and spreading it around as mulch, she’d gone to sleep, but woke a couple hours later, in the pitch of night, struggling to breathe. Her lungs wouldn’t open. She forced each slow inhale. She knew it was the heap’s fault. She tiptoed to the window on the other side of her apartment. Even in the blackness, smoke and fumes poured off the heap. Leaf and needle, bark and chip, sap and oil, she had coated every inch of her property with it, all the grass, dirt, brick, wood, gravel, asphalt, and yet the heap was still four feet high.

She slipped into her sandals. Outside she cranked the hose with cold water and poured it over the heap. The heap took it, drank it up. She climbed the heap. She checked its heat. It steamed and fumed. What if the water was only basting the exotherms growing inside, speeding up whatever reaction was making it so hot? The sun would make it worse. What if it ignited and burnt the house in her sleep? She couldn’t sleep. She couldn’t breathe. She slipped into bed beside her husband. He was dreaming of the hundreds of black widows nesting in the compost bin. Her muscles and joints ached, sickened by the inhaled particulate, and yet she did sleep.

The next day she felt better. She went to the doctor. Her doctor laughed and pointed to her lungs and said that all the little alveoli were twitching. He jerked his gnarled fingers for emphasis.

At home, she slipped a medical mask over her face and climbed the heap. “I don’t know, I don’t know,” she mumbled beneath her mask. No matter how much she shoveled it, spread it, clawed at it, wrenched it into the buckets and garbage cans, flung it into the street, it never went down. Each new pocket poured with gray smoke. It was poison but it smelled delicious, like eucalyptus and pine on fire. Would her mask protect her? Her worn sandals became hot. Little craters of dead skin covered her heels, from a fungus that came and went with the seasons. She begged the heap to kill the fungus. She was tired of her husband throwing her socks away.

Her neighbor Neelam peered over the fence.

“That’s quite a heap,” said Neelam in her thick accent. There was a rough, almost serrated edge around Neelam’s face, little flaps of darker skin that created a border, but inside her face was stark white. She hadn’t the courage to ask Neelam why, and on sunny days like this, she was afraid Neelam would just burn away, that Neelam would go poof as if she had been just a ball of chalk the entire time. “There could even be a body under such a heap,” said Neelam.

“A body?” she answered. Neelam’s smile was childish, the rows of teeth split by the fat red worm of her tongue, the same smile she gave her own husband when she wanted something from him. Imagine herself being the corpse that a medical school student used to get her first A. The one who’d done the first dissection, removed the spleen, then the stomach, cut out the spine, found the pituitary, even the adrenal, carved away the basal ganglia, the hippocampus, sliced it and stained it, perfect, there’s nothing left to cut or pare away. That would be nice.

Neelam lifted a glass from behind her fence and offered her kvass made of beets and salt fermented in the sun. It had tasted too strong to be bad for her. Then she packed the last few aloe pots with heap-matter. What else was there to cover? She offered Neelam some of the heap.

“Your aloe is troubled,” said Neelam, shaking her head. Neelam knew the earth, was the one who’d told her to make a paste of baking soda to treat the welt on her husband’s neck, the one from the black widow that had grown and grown and grown for three days before shrinking. Now Neelam instructed her to separate the spiky shoots of aloe so they’d grow larger, “Split them in half, baby from mother,” she said, chopping with her hand, “Just like that.”

Again, she offered Neelam some of the heap. Neelam nodded and promised to send over her gardener, but no gardener ever appeared.

And what would a gardener say of this yard? Just look at it. The fence on Neelam’s side was fine, but the one at the back of the yard was a wreck. There was an oak tree on the other side, and ivy had wound upward and overtaken it, and now both oak and ivy bent into the fence, pushed it, stretched it, and took away all the sun from her one dwarf orange tree that produced hundreds of yellow oranges that never ripened. Somewhere on the other side of that fence, a dog barked. Exhausted from shoveling, she rubbed her shoulders and listened. Sometimes that bark was all she heard, yet sometimes she didn’t even notice it, just like the moan of the trombone from some attic she could never place, a beginner who played and played his scales but never improved. Sometimes the trombone sounded like the dog’s bark. Sometimes it sounded like the buzz of a sander in some other direction. Three sounds, three distances and directions. And still that ivy! The dog barked again, and she took all of that exploding black anger at the ivy winding over the fence and crawled over to yell at the dog, but upon seeing the dog she couldn’t speak. It was missing patches of fur. What’s left was mostly gray. Gray as its eyes, glossy and gray, frightened and confused and black and dark, and she understood its shouts. Pacing back and forth, dragging its heavy metal chain against the concrete in an unkempt backyard littered with sun bleached children’s toys held to the ground by cobwebs and rust, she understood the dog’s shouts and stepped back down.

Now she walked to the street, searching for an idea having something to do with the heap, something to do with disposal. The street was empty. Her neighbor on the other side wasn’t there, though he was always there on the sidewalk without enough clothing, watching the details of her own coming or going. He had once been in the service, had once had a motorcycle, had once had a wife who wasn’t confined to a wheelchair and connected to fluids, had once had children in his house. She still heard the shouts of siblings and laughter of children, but never saw them. Only twice had she seen the wife. Once when he had run over demanding a fire extinguisher, and she had seen the flames licking the concrete out the window of their kitchen, heard the shrieks of the woman in her wheelchair. And then twice when he had run over begging for computer help, fearing a virus had deleted his wife’s homework forever, and she had helped and the woman had thanked her and thanked her again and for some reason she’d said thank you back.

Now the third neighbor was on disability. He had a bad thyroid. He had something to do with a church, but she didn’t ask so he’d have no reason to picture her burning or melting or turning into charcoal or tar or whatever other vision he might keep hidden in his head. Maybe he would help her with the heap. Maybe he could get one of his people to help. The third neighbor had something to do with the house down the block, towards the train station, the white house with mint green trim and a screen door that looked like a simple grating but blocked all outgoing light so you couldn’t see inside. Many of the people walking her block with varying signs of acknowledgement had something to do with that house too.

There was Smoking Man, the first one up and out in the morning, sitting on the curb with his head down, the ember of his cigarette never getting further than an inch from his chapped lips.

There was Singing Man. When he wasn’t singing he looked like someone had socked him in the eye. When he was, soul and melody swept across the concrete, soothed the reaching plants, and reverberated down into her white and twitching alveoli.

There was Basketball Shorts who always looked terrified and sometimes sat with Smoking Man, but could also be seen on his laptop at the coffee shop around the corner next to the Gnostic church that held weekly garage sales (but Smoking Man was never allowed inside the coffee shop). Basketball Shorts always looked at her in a way that said, “I don’t want to know you.”

And there was Hello Man. He also smoked. He was always in motion along the sidewalk in the same direction, past Neelam’s house, past her house, past the third neighbor’s house, towards the white house with the screen door. Hello Man was the tallest and darkest and most serious man she’d ever seen. His face was solemn as he walked, slowly, steadily, every thought devoted to the maintenance of his deliberate pace, except when she passed him and his smile brightened like the sun, teeth and all, and he said with a slight nod as sincerely as she’d ever heard, “Hello,” and then again, “Hello,” and then he looked ahead again and continued towards the house with the screen door, looking again like he had been pushed, yes, pushed, by someone, somewhere, sometime back.

She told her husband many things, but she didn’t share these walkers with her husband. They have no place in her story and yet she cannot leave them out. But telling him would just reduce them to funny anecdotes and bad fiction. Imagine them helping take the heap away! Hello Man might have carried some back to the house with the mint green trim. Its barren dirt yard could have used the cover. No matter, the street was empty.

She looked at the three cement pylons preventing cars from entering her block from that side. She walked to it, looped around the middle pylon, and reentered her block. She liked entering her street from the wrong way. She could imagine her life would now proceed upside-down or in reverse. She felt at ease thinking that the only knowledge ever achievable was an understanding of chronology.

At night, while dreaming of the black widows crawling up her husband’s arms, she wakes again, unable to breath, terrified by the thought of smoke and fire. Slowly sucking at the air, she returns to the window and eyes the smoking heap. She slips on her sandals. Outside, she stands beside the heap. It is silent without the dog, the sander, or the trombone. The heap gives off no sound. A room lights up in the third neighbor’s house. She stares at the heap, measuring its level. She tilts her head this way, that way, a third way. She thinks yes, it might have shrunk. A centimeter maybe.

Scott Lambridis’ debut novel, THE MANY RAYMOND DAYS (about a scientist who discovers the end of time) received the 2012 Dana Award, is represented by Richard Florest of Robert Weisbach Creative Management, and is seeking publication.Stories of his have appeared in Amazon’s Day One, Slice, Memorious, Cafe Irreal, Painted Bride, and other journals. He completed his MFA from San Francisco State where he received the Miriam Ylvisaker Fellowship and three literary awards. Before that, he earned a degree in neurobiology, and co-founded Omnibucket.com, through which he co-hosts the Action Fiction! performance series. Read more at scottlambridis.com. 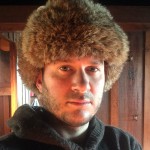