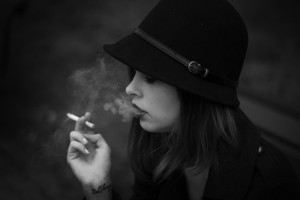 Once we were Bonnie and Clyde for Halloween and I loved the picture of us holding guns up to our chins like we’d blow our own heads off.  I’d never do that. Never fire up into my jaw, but I would have shot bang through your cheek, just so I could peer through the hole. I lied when I said I watched Natural Born Killers. Juliet Lewis is an old whore. Talks like she’s on codeine or swallowed something sour. What was your favorite part? Your question rattled me. All of it, I lied, and suddenly I was in fourth grade all over again.

The only candy at the party was Twix. All the lights were green and everyone was lounging high on threadbare cushions. The one window, a horizontal rectangle, was fogged up or frosted, and anything worth grabbing onto was fabric or metal. I avoided all the kids wearing masks, too easy to send a person into hysterics.

From the shadows, you pointed your gun at Rainbow Brite’s striped socks—fake shot, fake kick-back—then you turned around to see who had witnessed you earn your gangster shoes. Even plastic guns can do damage; waving them around gives a person power, and at some point pretend is more than a fancy hat.

I remember whiskey in water glasses like thin iced tea.

I would have made out with you in the bathroom longer, but it was the sink, it creaked away from the wall like a bad tooth, and I felt beanbag heavy from all the rice we ate.  Let’s shoot up this party, hold everyone hostage, you said while I wrestled my tights back into place. Sounded backwards to me. Can’t trade dead people, I said. Lifeless bodies lack value. You raised your Wal-Mart toy .45 and made ironic machine gun sounds with your mouth, slow motion. It wasn’t even at me. You were shooting my reflection, which felt like shit. Two girls banged on the door, four fists were an army. One was laughing and one was crying, and isn’t that how it goes?

Open your mouth, I said, and I know you remember this part because it’s when you stopped looking in the mirror. They do it in the movies, I said. And you thought you’d be funny by sticking out your tongue like you do at the doctor’s, all aahhh and pink muscle wagging naked. I felt your teeth clank against the plastic, and the sound wasn’t flat like teeth on plastic should be. I think you said, Wait, Georgia! but the words got lost against the barrel. Double fists pounding against the bathroom door and the Come on! We gotta piss! and a base thump that writhed in the tile. Your whole body quaked but you didn’t shove me back. With a kick, the bathroom door flew open, and the girls came in like spiders. And one of them was a spider, rocking her spider legs as she peed. The other, something dead and trampy, judging our tableau. Twisted shit, that other one said, and I pulled my gun from your mouth, light as an empty beer can.

We hung out for two weeks after that, but you stopped taking showers and spoke in old movie quotes. One morning you took all the Mountain Dew and split.

What if Bonnie had turned on Clyde? Just sick of the duo routine, ready to go solo. Maybe grow her hair long.

Rosie Forrest‘s short fiction has appeared in Dogwood Journal, Wigleaf, Word Riot, SmokeLong Quarterly, Whiskey Island and elsewhere. She’s the winner of the 9th Annual Rose Metal Press Short Short Chapbook Contest and recently completed a residency with Interlochen Arts Academy; now she makes her home in Nashville, Tennessee, where she purchased her first ever tenor guitar. More can be found at rosieforrest.com 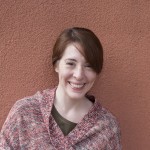