Ricky’s was the greasy spoon type of cafe, with ragged curtains, cheap tables and chairs, and the menu handwritten on the wall. Working there wasn’t exactly exciting, but for a part time job while I went to college, it paid well enough. I couldn’t complain.

Frank and Kelly came in on my first ever Sunday lunchtime shift, though of course back then I thought of them as just another old couple passing the time and wondering where the hell their lives had gone. Frank had his paper, as ever; after taking his seat he passed the puzzles section to Kelly, and then turned to the sport section. When I took their order Kelly did all the talking, asking for two cups of milky tea, a sausage sandwich, and a slice of chocolate cake.

I sent the order to the kitchen, and when it was ready I took it over to the table, giving the cake to Kelly and the sandwich to Frank. They thanked me, and I moved on to another table, but when I looked back I noticed that they’d switched the plates around.

I saw them again a week later. Their order was exactly the same, but this time when I took it over I gave them each the correct plate. Kelly thanked me and Frank smiled, showing half of his teeth missing, and then they introduced themselves.

“So do you guys come here often?” I asked.

“Every Sunday,” Frank said, peering at me through thick-rimmed glasses.

“Have done for years,” Kelly added. She reached out for Frank’s hand, her wrinkled fingers touching his.

They weren’t exaggerating. Every Sunday from then on was marked by the appearance of Frank and Kelly, always at the same time, and always with the same order. It’s funny how a relationship can be built from fragments, little scraps of time taped together over weeks and months. Something about the two of them fascinated me – maybe it was the fact that they were still together after decades of being married, when my own folks split up when I was a baby – and I always made sure to be the one to serve their table.

After the first few weeks I started to sit down with them for a couple of minutes every time they came in. They’d tell me about what they had been up to, and they’d ask me about college, and what I liked to do in my free time. When I told them I was in a band, Frank’s eyes lit up. “I used to play the guitar,” he said. “Back in the day.”

Frank and Kelly didn’t speak much about their family. From what I could gather, they had one son, but he had died serving in the armed forces before he had any children. So there was just the two of them. Maybe that’s why we connected: I was like the grandchild they’d never had, and they were like the grandparents I’d never known.

Even though the town we lived in wasn’t that big, I only ever saw them once outside of the cafe. It was a Friday night, in a dingy little venue, and my band was the second support act for a local group who’d recently received some critical acclaim. When I strutted out onto the stage and picked up my guitar, I looked out across the crowd, looking for familiar faces. I’d invited my mum, who had never been to see us play before, but I couldn’t see her anywhere. And then I clocked them in the corner. Frank and Kelly, waving.

On Sunday, they were there at the usual time. “We enjoyed your concert,” Frank said.

“Although I think my ears might still be ringing,” Kelly added.

They asked if we had any tapes of our music, so I told them I’d make a CD and bring it the following Sunday.

The following Sunday, they didn’t show up.

It was the same the next week, and the week after that.

I tried looking them up, but that made me realise just how little I really knew about the two of them. I didn’t know where they lived, or how to contact them. I didn’t even know their last name.

It was a cold Sunday morning when Kelly finally walked into the cafe again. Alone. I didn’t even notice when it happened, and one of my colleagues took her order, but I grabbed it from the kitchen and took it out on a tray, just the same as ever. I put the drinks on the table, along with the sandwich and cake, and sat down across from her.

“Where’s Frank?” I said, smiling, but I stopped when I saw the look on Kelly’s face. She shook her head, and stared at the table. She sipped her tea, still steaming.

It was like someone had punched me in the stomach. I wanted to say something, but none of the words in my head sounded right.

“I’m sorry,” I said, acutely aware of how insufficient it was.

“You’ve got nothing to be sorry for,” she said.

Kelly looked up at me and frowned, as if I’d said something she didn’t understand. She wiped her eyes, and then she pushed the other plate towards me, the slice of cake still untouched.

Anton Rose lives in Durham, U.K., with his wife and their very fluffy dog. He writes fiction and poetry, and his work has appeared in a number of print and online journals. Find him at antonrose.com or @antonjrose. 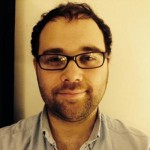