Grave Rubber: A Self Portrait by Emily Linstrom 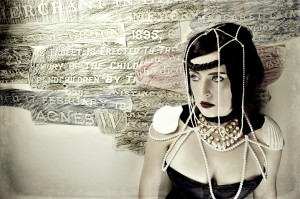 I visited Edinburgh for the first time the summer of 2014, and all I can say is that the city knew me. There are places that do that: recognize you instantly, and reveal themselves in a way that often eludes both tourist and lifetime resident alike.

Of all the corners and keeps I visited, the greatest monuments where the graveyards. I can only describe them as museums: of art, of architecture, of poetry, of a history as rich as it is dark. If Edinburgh was a city that instantly recognized me, the subterranean souls of the departed acted as ambassadors. I spent many an afternoon roaming the cemeteries and making grave rubbings, which went on to form the background of this self portrait. Two bits of prose ran through my head during my time among the tombstones, as well as while I was crafting this piece:

“Of his bones are coral made.
Those are pearls that were his eyes.
Nothing of him that doth fade,
But doth suffer a sea-change
Into something rich and strange.”

and the first verse I read on the Scottish wall of Parliament:

But Edinburgh is a mad god’s dream
Fitful and dark,
Unseizable in Leith
And wildered by the Forth,
But irresistibly at last
Cleaving to sombre heights
Of passionate imagining
Till stonily,
From soaring battlements,
Earth eyes Eternity.