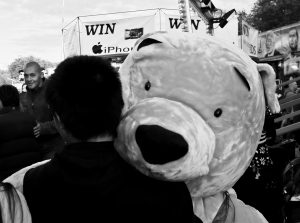 The proliferation of stuffed animals in the world has begun to trouble me. Their original status of beloved and cherished companions, comforters, collaborators and keepers of secrets has been reduced to that of yet another dust bunny perfunctorily installed on or under an indifferent bed. The manufacturers make them too often cheap and shabby carnival prizes but they are also capable of making them incredibly lifelike, impossible not to cuddle, to cherish. Regularly at the thrift store, all stuffed animals are $1.29. Today all donated merchandise is 50% off. Only 65 cents for a beautifully crafted beagle! The soft articulate folds gathered over the poignantly realistic brown glass eyes, the drape of cloth flesh in the corners of mouth exquisitely tender and the whole of the plush beast in perfect condition, not a stain or worn spot on it. I can’t resist, gently palpitate its form.

I am not the sort of woman inclined to collect stuffed animals but the elderly client that I routinely accompany to the second-hand store compulsively buys stuffed dogs. It frustrates me that she is entirely indifferent to quality, condition and any kind of esthetic. Surely a rudimentary sense of discrimination could have been cultivated in her. Too late now! Gaudy unnatural colors, fouled nap soiled with all variety of fifth and vulgar comedy are routinely acquired. It only has to be representative of a dog. Daily she ravages the thrift store stuffed animal bin for fodder. When her accumulated collection grows cumbersome, bags of the simulants are returned as donations. She has in fact purchased some of her “babies,” as she refers to them, more than once. It scarcely matters. Under her ministrations, the varying mélange of stuffed animals is ritualistically dressed and blanketed, put to sleep and awakened again. This occupation absorbs her longest periods of concentration each day. All the rest of her routine is established for her by caregivers; meals, meds, personal care and prescribed community activities such as the shopping trips we make to various thrift stores. I buy the beautiful beagle but I do not give it to her.

In addition to attempting to save the occasional plush soul from the cycle and as a result of these obligatory visits, I have begun purchasing all my clothing at second-hand stores. One of the problems with being employed, purportedly to be kind, is that it doesn’t pay well. I can no longer afford the over inflated prices at department stores. I can’t justify paying for the hype, the hypnosis, the cosmetic con. Uncomfortable memories of shopping bags full of expensive clothes and accessories tossed into closets and forgotten sometimes assail me as I navigate the aisles. The insatiability of that shopping, trying to buy my way to a different state of mind, the construction of an alternate self, was clearly an act of desperation. All that money, or much more often credit, was wasted. I have been extravagant, I have been frivolous, but I can no longer afford the luxury of self-delusion.

I haven’t entirely given up on the possibility of some aesthetic reconstruction. One can, if you look persistently enough, find anything you want second or third hand. Designer labels in impeccable condition, some with the sales tag still attached, frequent the racks every bit as often as the worn and dirty nubbed-up castoffs. I try to believe that there may still be the possibility of personal reconstruction as well. I am gradually getting better at resisting the impulse to purchase clothing that is too small for me simply because I wish I could wear it, to seeing through a garment’s original allure to its current reality as a shabby piece of apparel. I have learned to sniff the armpits and check the places prone to friction wear. It is a process. And I do sometimes have to return poor clothing choices as donations but I am narrowing in on a kind of balance between impulsive mis-expenditure and prudently useful acquisition. But when I say I aspire for balance, I mean that I still want, in some measure, to have it all.

Fixing the small things that can be fixed is part of my new methodology for living. It is a part of the practice of living within my means, of being poor but still chic, impoverished yet clever, being indifferent to the ease and comfort of others, who have not in my estimation worked any harder than I but seem to have been gifted with a disproportionate share of life’s luck. I do sometimes struggle not to be bitter. I must remind myself that I am likely patrolling the aisles of the second-hand stores in the company of people less fortunate than myself. Even the employees being trained for successful employment reflect a misfortunate life positioning. The one clerk is in need of some serious dental work, his front teeth half broken or rotted away. I am convinced that his nervous almost obsessive attempt to be witty in a self-deprecating manner is a result of a lack of self-esteem caused by his dentation. If I were to win the lottery or write a successful young adult novel for which the movies rights were purchased, as I sometimes imagine might be possible, I would give him new front teeth, a handsome smile and I am certain he would be readily employed outside the arena of special needs and disabilities. The other clerk I would not be so generous with. I would readily sentence her to long-term continued employment at this establishment. I have contemplated speaking to the manager. Let her gain some hard-won perspective! That disheveled young woman flaunting her greasy hair with its conspicuously unartful roots and her unpleasantly superior attitude is dully offensive. I really don’t appreciate her over-inflated sense of self-importance; queen of this tiny realm.

When I am asked what I do for a living, people often respond with some version of “Oh, you must be an angel to do that kind of work.” By “that kind of work” I suppose they mean wipe people’s bottoms and clean their toilets. But I’m no angel except possibly the slovenly and occasionally inebriated sort of archangel John Travolta played as Michael or Tilda Swinton’s scorched and wing shorn representation of Gabriel. I used to be empathetic, big-hearted and altruistic. Now I am just tired. I have started to realize that my life expectations have been unrealistic. Not just the manic over-inflated expectations of fantastic daydreams but my everyday supposedly realistic expectations have also been unrealistic. I think that I have lived my whole life as though I expected to win the lottery. As though that was the way in which people met their expectations, funded their lives, created stability and futures. All good things flowing from random acts of chance that gift money and ripe opportunity. The fact that I have worked long and hard and have failed to be the receiver of a fair share of life’s bounteous goods has caused me to question my worth, resulting in a persistent low-grade depression.

There are support groups for alcoholics, drugs users and the overweight but you don’t see much in the way of support groups for screw-ups, for the persistently banal and ineffective plodders. I believe that the great perversity of my life is to be just smart enough to realize how brilliant other people can be. Here am I mentally slack-jawed and drooling a bit in awed appreciation, dumbstruck by the beauty even while that awareness is wrapped in a thick batting of grey mental lint. It is the perception of that glimmer that never lets me be satisfied with any of my own efforts. I have wasted the bulk of my life volleying from vocation to avocation. Even my best moments of almost-had-it are not satisfying. I have felt compelled to keep on self-destructing, tearing down whatever little structure of self I have cobbled together in my aspiration for something greater, for more. I realize now that I could have had a perfectly good ordinary life if I had applied myself to persisting in the same well-worn paths that plenty of other people have trod before me. I could have had relationships, a family, one of those lifelong complicated co-dependencies that almost anyone seems able to pull off. I could have been a pretender. Except for me, that isn’t really true. Within the construction of one of those relationships there would always be those awkward moments when a word, a gesture, a look; that complex and so subtle play of muscle under skin, the accusing glint of light from the glass eye of a plush beagle, revealed an awareness of my extraordinary ordinariness. Even fleetingly, I just couldn’t bear to see that reflected back at me, that devastating confirmation of my own self-estimate. 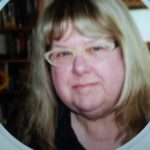