Godheads and Hotdogs
by Mike Joyce 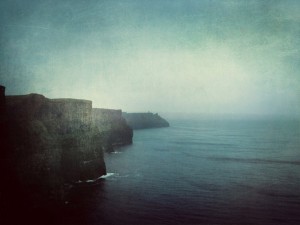 With a kick I’m falling through blue skies 14,500 feet above the geometric patterns of rural streets with rural wooden chapels. Up here the little thickets look like so many balls of lint, the twisting stream a crack in the wall. Up here the memories are smaller too.

I whoop in delight and spread my arms. It feels like I’m stationary on an escalator and the world is moving nearer to me. I reach down, dreading the tug of the harness and the awareness of my constraints. I pull the ripcord.
Nothing.

I tug and tug so hard that my whole body spins upside down and my parachute pack is facing the wall of earth that is pressing closer by miles that seem like millimeters. I feel a push from my back: the Automatic Activation Device. It has deployed the emergency parachute underneath me, rendering it useless as all it does is wrap me in red canvas. I hear nothing but an awful flapping as I fall to the earth like a dead sailor shoved starboard.

Chicken alfredo with asparagus. No. A hotdog. A nice Chicago-style hotdog. No, just a hotdog, plain with nothing on it slapped on Wonderbread. Christ, why do the simplest, most mundane things only seem attractive at the worst times? Her. Yes. She was simple. All that contradiction and depth masking nothing more complex than scabbing lips and a self-destructive desire for the unique.

The sun seems so cold right now—but that night the black sky was so warm. She was standing there with a tray of fudge with mismatched candles sticking in it.
“Happy birthday!”

A smirk from me. A nervous smile from her. A card.

On the front of the card a cartoon cat and dog are falling out of a skywriting plane that is crashing. Black smoke from the plane says Happy Birthday! The dog’s got a parachute pack on and his slimy tongue is flapping in the wind. The cat’s got nothing and is hacking something up.

On the inside of the card the dog’s pack opens and it’s a giant hairball instead of a parachute. The cat’s finished hacking up, and out comes the chute. Now the smoke reads: “The mind’s like a parachute. It doesn’t work unless it’s open!”
She laughs her nervous laugh. “Do you, do you get it?”

I put on a slimy smile and a fatal peace overtakes me. I close my eyes. For a hydrogen moment I telescope out of my body, out of the atmosphere into the quiet black behind my eyelids and I imagine that the Earth itself is the disembodied head of a god. He’s laughing at a joke. The head is blue with big white eyes and I’m just one of his many annoyances, just a dust mote falling through the ether, soon to collide with it. Just a scab of dead skin beaten into invisibility.
Maybe I’ll make him sneeze.