Girls on Film
by Kathryn Kulpa 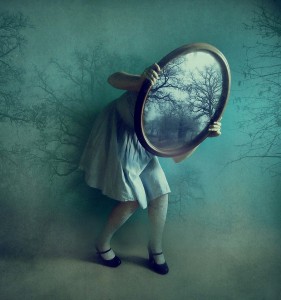 She closes her eyes, opens them, and starts her scene. She plays herself. The girl on the bus in Chinatown. She has never known so close a crush of bodies, their legs swaying then steadying against hers. Intimate and impersonal. She is standing, suspended; she is a strap hanger, floating in a sea of flesh. Bodies buoy her, breathing foods eaten and half eaten into her air, but she is alone. You are a stranger here, she tells herself. She is a stranger here. A girl reflected in a bus window, a felted wool beret, a black swing coat, is it like one worn by Lauren Bacall in a film? Was it film noir, only her eyes lit? The director chooses. She waits for the director to frame her shot, decide the angle, provide motivation. She speaks secret thoughts into microcassettes no one will play. She’s a girl on film. She invents an audience, a perfect camera’s eye. The director chooses. He chooses her. He follows every move she makes, and somewhere in the pocket of his trench coat there’s a book with notes on the plot. He waits and will never stop waiting. He watches and never grows bored. He never speaks, except to say yes. She likes imaginary men best.