The ground was shaking. I steadied myself against the sidewalk and screamed for my children. A moment later, tsunami sirens were going off and I never heard their response. Three years later, I am still waiting to find their bodies, for I know they are gone.

She slaps me. I look at her afterwards. My eyes are malicious with sorrow. Hers are bulbous with guilt. Maybe abuse awakens love. Maybe we are both stupid.

I am in Tokyo. My sister is supposed to be waiting for me at the train station, but when I get there a woman is on fire and a boy is stabbing himself.

All my family wants to do is smoke, so I go outside and sit behind the house. The dogs are with me. They haven’t eaten in days, and their fur reeks of decomposition. I wonder what they have been into as I whistle and watch the sky become plump with snow. Sometimes I think I’ll become a smoker like my family. I don’t know why they like the taste of Tabaco fumes. Maybe they are tired of having no taste in their mouth. The dogs aren’t the only mammals starving around here.
I can smell the cigarettes on the siding of our house. I think to myself we all live within a Tabaco shell. The thought is slightly amusing because I am a sarcastic young man. But it is also funny because the dogs notice it too and it makes them sneeze.
My mother searches the house and discovers my absence. When I hear the front door screech I know she will be calling my name soon and that I will not be answering. “Wicasa!” she hollers. “Wicasa, we’re out of smokes. Can you run to the store and get us some more?” I ask the dogs what I should do. They say I should stay here with them and scratch their empty bellies.

Ashlie Allen writes fiction and poetry. Besides writing, she would like to become a photographer one day. Her work has appeared in places such as The Jet Fuel, The Squawk Back, Gambling the Aisle, Conclave: A Journal of Character, The Burningword Literary Journal and others. Her greatest influence is Anne Rice, and her favorite book is The Vampire Lestat. 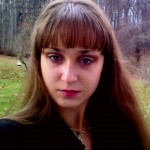