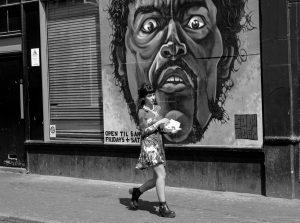 Stella stood in the pet section at the grocery store and stared at the dog bones–it was hard to know which one to get or how many. Stella worried because she wondered if her dog, Loretta, were a person, the girl would probably hate her or, at the very least, not love her quite as much.

Picking up a two foot rawhide braided into the shape of a candy cane, Stella thought back to all the things Loretta had seen over the years and knew that walks and thrown pieces of wood and food poured out of a bag and snuggling on the couch couldn’t possibly make up for it. All the simple failures one makes in their twenties—crappy apartments and terrible cars, hand-me-down couches and menial labor jobs that kept Stella exhausted and out all hours, broke boyfriends who lied while expecting her to pay their way—but what else was there in those years but poverty and social currency and a sea of missteps? She put the rawhide back into its box on the shelf.

Stella turned and walked down the rest of the aisle of the pet section—it was so close to the meat department and steak was better than a rawhide. Those old times were far behind her, behind them, they could afford more than a rawhide, and Loretta was nicer than any person she’d ever met.

Just last week Loretta knocked a bowl off the counter and it shattered on the floor—the dog had cowered in the corner, scared by the noise and what she’d done. But Stella had just smiled, and, a broom and dustpan later, all was forgiven and they were back on the couch together. And iff ‘Retta could lie on the foot of the bed while Stella slept late, waiting for her to rise and shower and go for a walk to the dog park, then maybe Stella could be patient, too. Broken bowls and dumb relationships were just things that could be cleaned up. Everything could be cleaned up.

Stella stopped at the counter and waiting for the man behind it to look up. He did. She smiled, resolved, and said, “I’ll take two porterhouse, please.”

Stella nodded. “Me and my best girl.”

Sheila Arndt is a writer of poetry, fiction, and non-fiction who lives in New Orleans. She cares about the modern and postmodern, critical theory, Americana, saltwater, garlic, canines, old blues, and new dreams. Follow her: @ACokeWithYou_ www.sheilamarndt.com 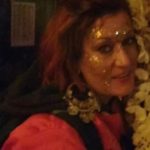