When you called, I let the phone ring three times and then picked it up. I was hoping you were calling to tell me you thought it over and we should try again and since we’ve had so many try agains we should be better at it this time but I only heard the dial tone and then I remembered you only give people two rings to answer your calls and, on the third ring the phone was on its way back to the cradle. We used to argue about your short window of answering opportunity and after a while I came to accept it, but truth, is that sometimes it takes people more than two rings to cross the room and pick up their cell or their landline. We both know you’re not going to change that quirk of yours and I know you hate when I call any of your quirks, quirks, but what else should I call them? I could call you back but you know the old salesman’s rule—the first one that speaks loses and while you would be the first, technically by saying hello then I would have to speak more than one word and therefore would be on the losing end which might not be so bad if it got us back together or at least to a coffee shop or a motel or a play-out of one of our fantasies deal. You’ve been in my fantasies lately in a strange way. I started thinking I saw mice running across the floorboards by the TV and I’d look away from my book and I’d never catch the little bastards. Then that morphed into my seeing birds flying by up high while I was driving and this went on for a couple of weeks and then the mice came back and no, I’m not doing any drugs, but I started worrying about my eyes and I went to see the ophthalmologist and he told me I had “floaters” and it’s not a big deal and I told him I didn’t want floaters and he said many people get them and I’d get used to them and they’re not worth operating on and I don’t want my eyes operated on anyway but I don’t want floaters either. The doctor told me that it’s an age related thing where the jelly-like substance in my eyes becomes more liquid. I asked him if he had jelly drops I could add and he laughed and called his associates in to ask them in front of me about the jelly drops and they all had a good laugh at my expense and so I left and the birds were gone and that evening the mice were gone but later that day in the upper part of my eye you were floating by, only you were in a line with other Rockettes, high kicking with arms on each other’s shoulders as you went from left to right and all the Rockettes had your face and you were all wearing skimpy costumes and I kind of liked seeing you floating by all sexy and smiling and I knew that must have meant you were thinking of me and then you called so I’m returning your call to see how you’re doing and if you think we ought to move back into the “try again” mode and—oh, your lawyer wants my lawyer’s name well I don’t have a lawyer and why because you’ve been seeing someone and you’re getting kind of serious well I’m happy for you but don’t forget about floaters cause this character might only be floating on by and then what? You know what I mean?

Paul Beckman has two story collections, “Peek” and “Come! Meet My Family and other stories”. He has had over 300 of his stories published in print, on line in the following magazines as well as others: Literary Orphans, Connecticut Review, Playboy, Matter Press, Litro, Thrice Fiction, The Airgonaught, Jellyfish Review, and R.K.V.R.Y. He runs the monthly FBomb flash fiction reading series at KGB. His story, “Brother Speak” was selected for the 2018 Norton Microfiction Anthology. 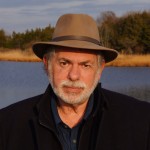