The Fire of 41 by Chad Schuster 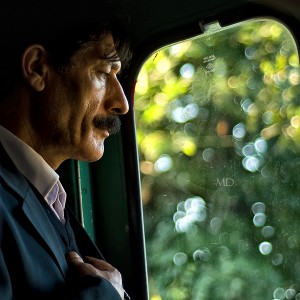 Asian kid, Euro flavor. Loafers, no socks. The same jeggings my five-year-old daughter wears. Except he’s a teenage boy with high hair, black, sleek. The bottle that holds his musky cologne is highly stylized. Angular. Focus groups ate the design right up. Every morning he lifts it from his Ikea dresser and spritzes expectantly, with verve, like the stuff will land him on the Forbes 500, score him a Maserati like dad, the gastroenterologist.

The death of any one of the following five individuals would make him cry:

If he had a boat it would be a sailboat and he would name it “Jib and Tonic.” Look for him cutting through the Bosporus, diagonal sails framed by the sunset, the collar of his pink shirt flapping in the wind. But that’s in twenty years. Today, Seattle, the bus. May he never forget what it feels like to be here. May he not just stare into his phone or down at his shoe tops like the rest of us. May he enjoy the cornucopia that is route 41.

That tattooed guy’s spiky orange hair, for example, is a fire raging on a hillside. Sometime last week the air conditioning blew one of its embers into my gut. Sent me to the hospital. I had to wake up my wife at 3 a.m., go for a ride in an ambulance. I’ve dreamt of cancer each night since, but who knows? Ask the Asian kid’s dad, Dr. Whang. He’s probably reviewing my tests at this very moment, as I make my way to his office for the verdict. I’m hoping for gallstones. Or a ferocious case of indigestion. Anything but cancer. A godless ghost like me would not take kindly to being killed by something so trite. I’ll be an angry dead man. I will haunt. Murderers, rapists, exploiters. I will terrorize them, whisper curses in their ears as they sleep. Drive them to their end.

Then I will float across town to softly kiss my daughter’s closed eyelid, tell her I’m sorry I had to leave. She has bad dreams. She wakes up crying in the middle of the night. We hear her and stumble down the hall to offer comfort. Ghosts, she says. She dreams of ghosts. I tell her there’s no such thing. She pulls the blanket up under her chin and says she believes me. She’s lying. There’s a nearly imperceptible hesitation before she speaks, cheeks flush, blue eyes sleepy, blond braid draped across the pink pillow. The pause is how I know she just doesn’t want me to worry. She’s like her mother that way.

I will dedicate my death to keeping the house functional. If the toilet runs, I’ll haunt it. If some obscure hose in the car frays, I’ll haunt it. Weeds in the herb garden, haunt, hornets in the eaves, haunt. My wife deserves happiness, order, even if I’m not there to provide it. I will find a perch in the maple tree and keep watch, read the words of dead novelists in the silver moonlight, one eye on the sliding glass door.

The doctor’s son is listening to his iPod. This is his stop. A man in a wheelchair at the front of the bus says something to the kid as he disembarks. He needs help. He’s dropped something. Doc’s son stops, holds up the line behind him. He takes out one of his ear buds and says something to the man. They share brief genuine laughter. The kid bends down, retrieves the fallen object, hands it to the man in the wheelchair. They part ways. Seeing this small act of kindness chokes me up for some reason. The specter of cancer has made me sappy.

The good doctor has raised a good kid. Success at his most important task. No doubt he’ll take care if he cuts me open. I might ask him a favor, though: while you’re in there, doc, why not decode my dendrochronology? So that the truth might tumble out like coins from an upturned piggy bank. The one my only son, three, ceaselessly fills with pennies. Pennies on the sidewalk, pennies under the car mats. In the couch cushions. Always looking for more pennies, that kid. Each coin deposited makes him anew. He doesn’t yet know the value of money. He just likes the clank of copper on glazed glass.

This, I will tell my family on the day I die, is the essential question to ask as you go about the tricky business of reading people: If this person had a boat, what would he or she name it? The answer to that question means everything.

Only a few passengers left now. The doctor’s son is gone, and he is not really the doctor’s son. I don’t know who he is. All I know is that these people fascinate me. I want to understand each of them, sit with them in the sun on the deck of their boat, downing gin and tonics. But that will never happen. The best I know how to do is fill in the blanks, indulge in the boat game, the five-deaths game, these ridiculous gimmicks I’ve created to help me figure out who people are. They amuse me and challenge me and sharpen my imagination. They keep me occupied as the bus rolls on. They bring me closer to no one.

Chad Schuster lives near Seattle with his wife and two kids. His work has appeared in Glimmer Train, Hobart and elsewhere. Follow him on Twitter at @Chad_Schuster. 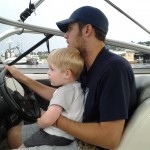