Fanning the Flames by Laurence Sullivan 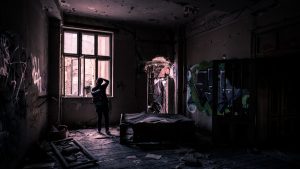 Johannes hadn’t had to pay his full heating bill in years. The Swedish discovery of the century – that the gnomes their ancestors had whispered about were real – meant that households across the country were benefitting from these most industrious of creatures. There were start up costs, of course, and Johannes had been forced to fork out for a little metallic tank to keep them in, along with a miniature furnace for them to work with – but his investment had soon paid dividends. The gnomes mined their own coal throughout the day – leaving Johannes’ home via a series of small holes in the woodwork – in order to keep their fire forever stoked. Whilst he felt bad for siphoning off so much of their hard work for his own comfort, there was something strangely hypnotic about watching the little fellows go about their business.

In Johannes’ mind, the little blighters owed him a debt of gratitude, given that outdoors most of the colony would have probably died from exposure, or have been trampled into oblivion by some wild reindeer – so it was a genuine service giving them a safe haven inside. What was a little work if it meant total security? It was no worse than paying rent, after all. Gnomes’ lives were just plain better when cohabiting with humans; it was as simple as that.

For Johannes, it turned out to be better than television: watching each of them in turn lob their little lump of coal straight into the expectant maw of the furnace – its insatiable big belly always ravenous for more. A whole’s day work would amount to – what? An hour’s free heating for Johannes in the coldest months, that was all. In that sense, they weren’t much more productive than the average bee – just a teaspoon of honey for a tedious lifetime of toil. That was still infinitely better than nothing, though, and failed to factor in the entertainment value they provided.

His nose pressed up to the tank – brandy glass in hand – Johannes wondered what they were thinking about as they laboured away. Did they view him as a kind of benevolent gnome god, or as some impassive giant who occasionally paid them a passing interest? If he were to take their furnace away one day, would they stay, or seek out some worthier pasture? Put simply, the question Johannes was pondering away to himself was: ‘were they loyal?’

There was only one way to find out.

Putting his glass down on the side, Johannes reached into the tank and tried to pick up the furnace for himself – forgetting how impossibly hot it would be. The metal maw immediately fell back down as he quickly pulled his hand away – blisters instantly forming across his fingers. The gnomes scattered, fearful of the monstrous maw spitting out its flames around their beloved den. Not thinking of the pain spreading throughout his fingers, Johannes rushed over to the kitchen counter and grabbed an oven glove – thrusting it onto his injured hand and going back to pick up the furnace before it could do any real damage to his precious gnome tank. The mainly metallic nature of the tank had prevented any major structural losses, though the glass frontage had started to ooze uncontrollably in a molten-hot mess. That was sure cost a pretty penny to replace.

The gnomes gazed up awe-struck at him for a moment, until the one with the tallest hat visibly furrowed his brow like an indignant child. As Johannes stared back at him, ready to remind them who was really in charge here, he suddenly felt an inferno rising around his fist. A glance to his right showed that his glove had spontaneously combusted and, acting on impulse, he dropped the furnace onto the floor and threw the flaming glove off.

It only took a few seconds for the wooden floor to catch fire, and soon Johannes had more heat in his home than he could have ever wished for. Seeing that his only exit from the room was already engulfed in flames, he turned to his little gnome colony for help… But the only thing he caught sight of through the suffocating smoke was a little red hat squeezing through a crevice.

As the heat of the room became unbearable and smoke wrapped itself in wisps around his lungs, at least Johannes could take solace in one thing… He had discovered that gnomes were, definitively, not at all loyal.

Runner-up in the Wicked Young Writer Awards: Gregory Maguire Award 2016, Laurence Sullivan‘s fiction has been published by such places as: Londonist, The List,Amelia’s Magazine, Foliate Oak and Crack the Spine. He became inspired to start writing during his studies at the universities of Kent, Utrecht and Birmingham – after being saturated in all forms of literature from across the globe and enjoying every moment of it. You can find more of his work online at: www.laurencesullivan.co.uk 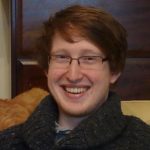