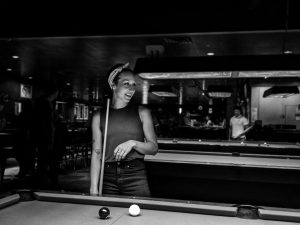 When I found out about fetal alcohol syndrome in abnormal psych, it put a lot of my childhood into perspective. The mothers I knew drank with the regularity of alcoholics, and I couldn’t imagine they would have taken a break for nine plus months of gestation.

“Did you ever notice Jason’s upper lip is kind of thin?” I asked Kayla. “Do you think he has small eye holes and a thick nose, through here?” I lifted my hand to my face to indicate where the truth about Jason could be found. My fingers were strange appendages, mini marshmallows held together by toothpick bones.

“You are so high,” Kayla said, which was accurate. I had eaten my gummy plus half of hers.

“He has trouble with emotional regulation,” I continued. “And perception. He’s always struggled to understand basic concepts. And what about how skinny he is?”

I had a vision of myself as a phrenologist, wearing a black cape and carrying tools for measuring heads around in a carpet bag from the 1800s. I had taken to examining my own face with scrutiny, wondering if my philtrum was rather undefined, as my mother Bonnie was known for her love of whiskey.

“If he doesn’t have FAS, at the very least he has ADHD,” I said, and my body was swallowed by the brown couch of Kayla’s basement.

“Am I still here?” I said from underground. “Is this real?”

“You need to meet a distraction,” Kayla said, impossibly upright on the coffee table, texting. She was dressed in shredded black jeans and a crop top, her head shaved on one side. Her arm was a profusion of new tattoos, dense with vines and thorns, muscles defined underneath. My own arm was flaccid in comparison. We were supposed to be going out to the bar, and I was dreading it.

“Go back to school and have fun,” Kayla said. “Go fuck some hot guys.”

Which is what Kayla would have done. But I wasn’t that type. I was the type that got stuck with a FAS spectrum boyfriend who had broken up with me before I could break up with him. Where was the justice in that?

“I always thought he loved me,” I said, my voice miserable. Perhaps I was sliding into a depressive episode. We were the same age as Jimmy when he killed himself. Twenty — an age where mental health issues could reach a peak of expression if not treated, where psychological intervention was important.

Kayla rolled her eyes. “You’ve been away for two years.”

Every time I came home, I realized how grateful my neurons were to be making new connections. The actual topography of my brain had changed. Instead of a remote ice-encrusted island, it had transformed into an inland hub, a newly formed continent of synapses, busy building connections.

The word ‘you’ reverberated, and the colour of my blood became obvious. I could see inside me, dark red, sticky purple, slow moving clots of tar. THC could act as a mild hallucinogen, I reminded myself.

I had talked about my studies. I didn’t realize Kayla had listened.

“To become a clinical psychologist,” I confirmed.

“Jason’s an artist,” Kayla continued. “The two of you together make no sense.”

These ideas percolated while I watched her texting, her face reacting as if she were having a conversation. Slowly, a feeling of offense crept up.

“Jason’s no artist,” I said, imagining his morose expression. “Why, because he writes those shitty punk songs?”

Kayla looked at me. “About life.”

“About life!” I laughed. Suddenly I needed to explain. As I struggled to sit up, a wave of dizziness became an actual wave, the boundaries of my body undulating, so I breathed and settled back down. “He writes songs about Jimmy’s suicide. But he doesn’t give a shit, he only cares about what he can get from it.”

I struggled to sit up again, this time with more success. Kayla was frowning.

“I know, it sounds horrible. But he pretends to be tormented about Jimmy’s death because it gives him a personality that he doesn’t actually have.” I was on a roll. “He’s latched on to it as an identity. Has he done the thing where he talks about Jimmy, then looks away, as if he’s tearing up? He isn’t. He’s just trying to get away with something, like fucking around on you.”

Which is exactly what he had done when he fucked around on me with Becca, something he still wouldn’t admit. I could see Kayla’s face, processing.

“It’s an act. Pain and suffering. Jimmy was the poet, Jason’s just taken over his persona.”

“That’s not true.” But she sounded less certain.

“Now that I think about it, Jason might have antisocial personality disorder.”

The funeral flashed in my memory. The whole high school was there, mourning Jimmy, supporting Jason. Jason was the center of attention for the rest of the year and beyond, his skulking and scowling suddenly correct and deep.  A myth built around him, a kind of infamy. But he was the same asshole I had always known.

I had always liked Jimmy better, everyone did. I felt a connection with him that, looking back, might have been a shared depressive state. Jimmy’s eyes were sensitive, shining with unshed tears. I would watch him when I hung out with Jason at their house, on alert for a glistening cheek after every blink, but it never happened. I imagined Jimmy’s long fingers while I made do with Jason’s cold hands.

I was struggling against the couch again, my body limbless and flailing.

Laughter was starting, a tickling sensation, the mirth like carbonation. I was wearing an oversized gray hoodie, a giant tube encasing impossible roundness. “And Jason’s a seal clubber.”

“A seal clubber?” said Kayla, face serious, lips a slash of ink, and I burst into a choking fit. I was laughing so hard it hurt. I was crying, holding my sides. “I’m dying.”

“Jason’s band. Me, Omar and Jason. We do the bar circuit. We’re supposed to do a tour this summer.” 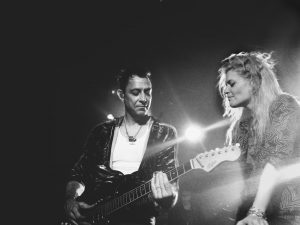 We were at the bar, sitting at a table. I kept envisioning myself lolling on the dirty floor, my black seal eyes rimmed with lashes, my roundness endearing, though covered in detritus from the boots. My body a warm and blubbery hug that would never be given to Jason again.

“Take this,” Becca yelled over the band slogging away at rudimentary chords. She pushed a pill at me. How had I ended up here, yet again, with the same group? Nothing had changed since high school.

“Adderall? Do you know what this does to your brain?” I said, swallowing it. “It’s basically the same as an amphetamine. It increases the release of the neurotransmitter dopamine.”

“What?” Becca said and shook her seventies barbie hair. She wore a denim pant suit, her skin spray tanned copper.

“All the people who died, died,” wailed the lead singer, Arman, Jimmy’s best friend. He always sang “People Who Died” with a bit about Jimmy. Everyone screamed the words; it was the anniversary of his death. I pictured him, tall and lanky, his concave stomach, black jeans. A cigarette and shot of vodka. Looking marginal while being the center.

Kayla sat beside Omar, who had also become more tattooed during my absence. He had the same quick smile, his forearms sinewy as a professional drummer’s. I looked around stupefied, listening to the pent-up emotion in the word ‘died’, waiting for the Adderall to kick in. “Died, died, died,” they yelled. Jimmy had died like a vanishing twin, flattened against the balloon of existence to be pushed out into nothingness, while Jason lived on, feeding off the energy Jimmy left behind.

Then I saw Jason, making his way across the room, everyone crowding him with a manic, borderline-style love. He was thin, model thin, like Jimmy used to be. They had the same jawline. My seal eyes followed him, attempting nonchalance, but the sound from my soul was a roar. Did I still love him? I didn’t want to. Hard not to when everyone else did, when people surged around him as if he was the only one that mattered.

Omar reached out, touching my lumpen forearm with icepick fingers, and passed me another beer.

“Drink up,” he said, and I saw a flash of tongue piercing.

I took the beer and downed half.

In a moment of intoxicated candour, Bonnie had let it slip that I could be the daughter of Gregor O’Doul, the guy who owned the bar we were sitting in. Gregor was a whip of a man, his face craggy as weather beaten rocks, seaweed hanging from his teeth. We did not look related. I was Bonnie’s clone – paternal genetic material did not seem to be a part of my existence. Bonnie was a little fuzzy on the details of conception when it came to myself and my half-sister. Lucky for us she had an emergency hysterectomy at the age of twenty-two, or I can only imagine how many half siblings would be running around with our DNA. But what if I was related to Gregor and his barnacle face? A degree in science was not an option for anyone from that gene pool. At school, I became panic-stricken if my marks slipped below a 90 — I could feel my origins pulling me backwards into the salt-spray.

I got up to go to the bathroom, my body buzzing with THC and agitation. The Adderall was kicking in. I swung open the door, alone, the yelling slightly muffled, but not by much. The bass shook the porcelain sink.

Jason had broken up with me over text. After my initial outrage, the message had acted as a catalyst toward self-understanding. I realized that my relationships with Jason and Kayla were fictional constructs I clung to because of a potential social anxiety disorder; they were like stuffed animals of the mind. Their existence allowed me to feel okay about being alone every night in my rented room, studying, instead of trying to forage real relationships with people I might have something in common with.

I stood in front of the mirror, a jittery doll, my body twitching like a mechanical cog. My eye holes looked small, the bridge of my nose wide. My head was tiny.

I washed my hands for the third or fourth time, the task felt unfinished somehow, and stood drying them with paper towel, another way to remove extra microbes that didn’t slide off with the soap. Which was how soap worked. It basically forced the microbes off in an elementary way, by being slippery.

As I opened the bathroom door using the sodden paper towel, I saw them. Jason and Kayla, staring intently at each other, almost touching, the energy between them like golden axons of communication. And behind this, Gregor stood at the bar, caught my eye, winked, and started to wipe down the counter with a rag. My FAS brain lagged as Arman’s band launched into “The Passenger.” Something was off; the guitar wasn’t quite right. Everyone was on the dance floor, drunk and high, each person alone but together in a mass of interconnectedness, limbs like dendrites.

A synapse released a neurotransmitter to a cluster of neurons and I remembered Jimmy’s mouth that one time, so soft on my own.

Laurie Myers-Bishop is a writer who currently resides in Waterloo, ON. Her work has been published in literary magazines such as Riddle Fence, Room and Matrix Magazine among others. She won the 2016 Little Bird short story contest and was nominated for the 2017 Journey Prize. She is currently working on a novel and a collection of short stories. 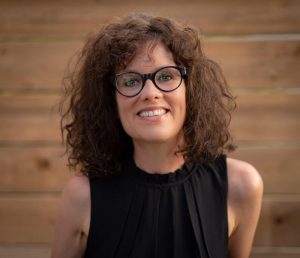