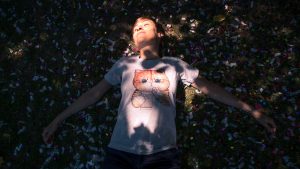 Before the axe met Lulu’s neck, Darcie knew she’d missed. It nicked Lulu’s jugular and she began to flounce, squawking and spraying blood. Darcie lost her grip as Lulu half flew, half bounced in the dirt, pinwheels of red splattering her feathers and Darcie’s jeans. She spread her arms and scooped the bird, pinning her to the dirt. Then, gritting her teeth, she grabbed Lulu’s neck and twisted the fleshy cord, slippery with blood, until she heard it pop. She huddled over Lulu as she continued to buck, her body thrusting into Darcie’s stomach, little whimpers pulsing through her body like shooting stars.

Darcie crouched until she knew, when she got up, that Lulu would be still.

“You’re dead,” she whispered. She could feel the weight of her heart resting in the folds of her lungs, like a soft fruit in her palm. She could feel it stop, skip, for just a moment. Then she got up and, cradling Lulu in her arms, like an offering, made her way to the house.

When she was seven, Darcie told her mother she wanted to be an astronaut. Her mind glowed with images of Gemini IV, the Apollo 11, and the Space Shuttle as if they’d been burned into the backs of her eyes. She read every book on space in the library the way she used to do field research on Barbie dolls in the Sears Wishlist catalog. At nights she dreamed of floating in the command module, giving the thumbs up to mission control as she did a feathery somersault. She thought astronauts were smart, brave people. She wanted to know their secrets: how they survived the G-forces without puking, how they became used to weightlessness and vacuum-packed food. How they could live in a black, soundless void millions of miles from everything familiar and feel like they belonged.

He walked a little ways from the keg, and Darcie was disappointed until he turned his head and nodded her at, come. A sensation rose in her feet, bouncy, as she followed him, across the dirt and fossilized cow turds, past the farmhouse to an old loveseat, red upholstered but wounded yellow where the foam seeped out of the cushion. He flopped down and she squeezed beside him and, away from funnel of smoke that swirled urgently into the sky, away from his friends and the party, they could see the stars.

“There’s Orion.” She pointed to the sky. “And Taurus.”

“Well, kind of.” She squinted her eyes, drawing an imaginary line around the stars.

“Okay,” he laughed. The muscles around his mouth tightened. Then, for a moment, as he hovered over her, there were no stars at all, only wisps of his hair, flesh and shadows, his breath, metallic, between them. And then, a crushing sense of gravity when he climbed atop her, his hips pressing her to the couch, his hands under her shirt. She grabbed for the edges as he pierced her, a butterfly onto mat board, and the sharpness made her see stars, first behind her eyelids but then over his shoulder. Polaris, the summer triangle, Orion. She wondered whether it was the same in space, sublime and frightening. So removed from where she last knew herself.

Sirens jolted her into the couch, into herself. She closed her legs and staggered toward the woods, following him, the other kids. The flashlight shined on her back, a halo around her, and she saw the negative of herself, her shadow, on the ground ahead of her. She stopped and waited for the officer to take her to the patrol car.

She wondered if her father would make her carry bales of hay for hours back and forth, the way his father had done the first time he’d disobeyed.

“Since you think you’re an adult now, I’m going to treat you like one,” he said finally. “Now, Lulu ain’t laying no eggs.”

“I collected the eggs this morning while you were sleeping—she ain’t laying no eggs.” He took the axe off the peg in the barn and held it toward her. “I don’t care how you do it. When I come back, you better have taken care of it.”

“Lulu hasn’t been laying eggs.” Darcie took the juice out of the refrigerator and a stick of butter.

“Well, it’s about her time.” At the stove her mother fried the eggs Darcie had taken from Portia.

“Don’t stick up for her, now—life is life.” Her mother slid the eggs onto a plate with the spatula. “I remember how you were with her, though.”

When Lulu was a chick, the other chickens pecked off her toes. Darcie kept her in her room in an old Avon box lined with towels and coated her little stubs with antibiotic cream until they healed. The chickens were all her pets, her playthings. Until they got older. The first time Darcie saw her mother kill one, she was nine. She had been surprised that she broke their necks. Her father had a small axe that gleamed from its peg in the barn, but her mother liked to touch them, to comfort them. Darcie stood in the doorway of the coop, one foot outside, her calf burning in the sun as her mother pressed Rose’s wings into her body with one hand and held her neck against the dirt floor.

Jen Michalski is the author of the novels The Summer She Was Under Water and The Tide King (both Black Lawrence Press), a couplet of novellas called Could You Be With Her Now (Dzanc Books), and two collections of fiction (From Here and Close Encounters). Her work has appeared in more than 100 publications, including Poets & Writers. In 2013, she was named as “One of 50 Women to Watch” by The Baltimore Sun and “Best Writer” by Baltimore Magazine. She is the host of a fiction reading series in Baltimore, called Starts Here! and is editor-in-chief of the literary weekly jmww.