Encounters In The Park
by Sarah Clayville 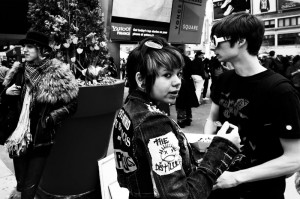 We’ve slept together three times in the last month, and he still has the nerve to call it a one night stand.  Face blindness, he claims.  Each time we’ve met in the awkward moments between dinner and sleep and fallen into his bed in an apartment overlooking the park.  We stay together long enough to tangle and untangle before he makes a sour face like he’s just tasted something metallic.

“I’m in good company.  Brad Pitt.  Jane Goodall.  They’ve all got it,” he justifies.  “It’s ugly business not recognizing a person after you’ve met them.  The social stigma’s suffocating.”

He stands and mills around the loft, one room masquerading as everything a person could need.  Even the tub and toilet are separated only by a filmy shower curtain extended from the ceiling and oversized silver utility rings.

“You’re telling me Brad asks Angelina to remind him of his children’s names because he’s got prosopagnosia?”  It hurts to pronounce, the o’s hollowing out my cheeks.

“You say it like it’s a disease.  I’m not a leper.”  He’s already back in his grey shorts and a polo shirt dressy enough to go elsewhere.

“Would I be here for a third time if I thought you were a leper?”

I refuse to get dressed, rolling to the side and admiring the shadows my curves throw onto his sheets like dangerous highways spiraling with abandon.

“I don’t know you well enough to answer that.”  His brown eyes dart like hummingbirds when he speaks.  I want to ask him if maybe he’s never bothered to look at someone long enough to take in their features.  That’s not a disease, that’s a mistake.  “I remember faces that are staples in my life,” he adds.

I feel a wanton flush drop across my body, because the opposite of a staple certainly is a one night stand.  I retreat under the threadbare blanket, my knee poking out of a healthy hole.

“In all honesty,” he posits, “you’re taking terrible advantage of me.  We must have discussed this the first night.  I know I tell women about my condition.”

“How many women?” I venture.

“Many women, from the park mostly.”  This admission settles his eyes on the window.

“Your feeding grounds, then?”  He reminds me of anything but a predator.  His arms are solid but thin, his shoulders rolled forward as if he’s perpetually expectant.

“Hey,” his voice softens to dampen the acidity in my own, and he leans over to kiss my exposed knee in a duplicitously tender fashion.  “It’s clear my brain knows what I am.  Stop taking it personally.”

Thunder rumbles, rocking the foundation of the apartment building.  I want the ground to splinter beneath us and drag all the pretense and embarrassment down into the magma.

“You won’t see me around,” I assure him.  “There are other parks.  Better parks.”  Better lovers, I want to spit out.  Orgasms that wash over me without so much legwork.

He doesn’t bother to lock the door.  I don’t bother to get dressed.  With the blinds still open, the storm teasing with thunder and not a drop of rain on the parched ground, I stand perfectly still in the window hoping someone from the park will glance up and mistake me for a statue. Or a nude posing for the invisible artist I belong to.  I can be memorable, I assure myself.

His apartment is vague, and I start to believe the stories about face blindness.  Nothing indicates a closeness to the world around him.  And while I’m not lobbying to be a staple in his world – other men interest me more – he’s now become a logic problem like the ones I slaved over as a child on endless car trips to Maine.  Put an X in the box to indicate a no.  Write a question mark next to the possibilities.  Win through elimination.

He’s left a stranger in his home and other nights dozed off next to me, exposing his soft underbelly, for minutes at a time.  I gently open and shut uneventful kitchen cabinets.  The ingredients are all natural, everything from scratch.  Grains and beans in metal canisters lined against the naked brick.  Otherwise there are no decorations and entire walls sit achingly blank save a few hairline fractures.  Suddenly it all feels intensely egotistical.  He’s crafted an apartment you nearly slip out of because of its anonymity.  The ‘many women’ haven’t made a dent in this man.  His running sneakers are lined up against the wall, seven pairs, all laced and knotted perfectly.  They are the only ounce of character allowed to expand and breathe in the apartment.

Each time I saw him in the park I was impressed by his speed, his form.  The quiet science of his body propelled him forward, and I was compelled to follow and wait for a brief pause.  I positioned myself where he was already looking and respected his silent demeanor.  I’d acted in college, and I’m a waitress now.  I know how to offer myself up in a glance or a parting of lips.  But now I realize there must be an inherent emptiness, a namelessness, creeping inside of me that attracted him not once but three times.

He knows my face.

I Google prosopagnosia on my phone and study the hunks of brain highlighted discreetly beneath the folds of grey matter.  He’s done his research and named the appropriate afflicted celebrities.  I wonder if they’re all lying in a devious conspiracy with the scientific community that is already predisposed to dismissing intimacy as false chemicals and the body’s make-believe religion.  Or did Jane Goodall vanish into the chimp community where it was acceptable to identify creatures based on attributes other than face.  Coloring of the fur.  Humped versus square shoulders.

If this man can’t identify my face, won’t he recognize the expanse of my chest or my bow-legged calves.  No, I decide.  He chooses not to remember.  I want to leave him a note because anything too passionate or pronounced will be filed outside with the rest of the world’s chaos.  No lipstick on the mirror or smashed artwork.  I’ll find a reasonable piece of paper and list point by point the scientific breakthroughs I’ve experienced in his apartment.  I will expose his fraudulent affliction.

Except there is no paper available without rifling through his drawers, and all I’ve got in my purse is an old grocery receipt that reveals more about me than I care to share.  I hold my breath and open up his desk oddly faced against a wall with no possibility for a view.  There are layers of notebooks, the thin variety with pliant covers.  I almost expected tiny scalpels or rings with dozens of keys.  He has gravely miscalculated.  Uninvited chaos is sitting at his desk drawer, ready to pry him open at the ribs.

When I flip open the first notepad, I stare down at myself.  He’s drawn my face on the first page.  Perfectly.  Photographically.  Two infinitesimal moles flank my right eye.  He’s caught my lips not when they’re parted but at the moment they’ve closed together before he kisses me.  I can’t breathe when I see what he’s done.  In his own lovely, melancholy way he’s pried me right open.

A new hypothesis emerges.  With the help of technology and those damn logic puzzles, I get it.  His walls are bare because he remembers EVERY face, every tiny aspect of the world.  His white walls are his Prozac.  I flip further in case there are ‘many women’, but there are none.  Buildings with meticulous details.  Entire pages of novels that are eerily familiar, that don’t belong to him but probably danced around his head until he wrote them down.  An older man I guess to be his father with the same slightly crooked nose.

This man that I’ve chased down in the park three times is meticulous and knows I’ll be there.  He is afraid of what he is and knows it’s better to hold his cards close to his chest in case I decide to fold mine well before he does.  But regardless, he’s invited me in.

The notebook is kissed out of respect and tucked on top of the stack.  My shift starts in two hours.  I have to walk the dog and bring in the mail.  And after all of the not extraordinary things in a given day, I’ll put on my sneakers and happily run into him again.

Sarah Clayville is an author and high school teacher in Central Pennsylvania. Her work has appeared in The Threepenny Review, StoryChord, Toasted Cheese Literary Journal, and other spots. She is currently working on a YA novel, although her toddler and teen are still her greatest creations. 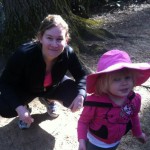