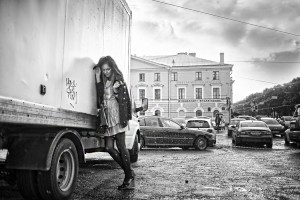 I am lying on a single futon shoved in the corner of our bachelor suite, drinking another bottle of pale ale and listening to a record. Something random from the clearance bin marked Blues at the music store. Lee’s in the kitchen scraping together supper. He’s the chef in our relationship–I’m just the girl along for the ride.

The last sip goes down quickly, and I stick the empty bottle in one of the boxes by the door. Let out a burp from the pit of my stomach that tastes like bile. I flip the record, walk into the kitchen, grab a cold hefeweizen from the fridge. Lee’s cracking eggs into a simmering pot of soup.

He shakes his head, picks up a glass from the counter. “I’ve moved onto water. Want to feel good tomorrow.”

Wrapping my free arm around his neck, I nibble at his ear. “Just remember water can’t do what I can do for you.”

I swat his butt and leave him in the kitchen. Almost walk into the wall on my way out, shit.

Footsteps start up the stairs that lead toward our front door. Then a knock. I make sure I’m wearing a bra and pull on a pair of jeans. Stick my beer on the coffee table before answering.

“Great.” He grins. There’s something about his smile, maybe the way it’s always plastered across his face, that makes him seem less like a street person. Less threatening.

“Whatcha got there?” I motion to the trinket in his hands, steady myself in the entrance.

Dimples take over his cheeks. “Found it in the alley on my way here. It’s nice, right?”

Richard’s a sweet guy. I have half a mind to invite him in, to offer him a beer. But I don’t want to encourage him—don’t want to make his situation worse. He’s probably hooked on something already. Booze, crack, glue.

“That’s sweet of you.” I take the ornament from his hands and smile. “Thank you.”

He laughs, brushes his greasy, black hair off his face. “No problem. You guys are so nice to me.”

“Speaking of which—” I haul the massive mountain of cardboard and glass from behind the door. “Do you want a hand out with these?”

His eyes bulge. “You guys must host some epic parties.”

I nod, almost fall down the stairs to his shopping cart. Think about how it’s just me and Lee most of the time. We’re pretty epic though—I’ll give Richard that.

“Thanks for keeping these for me. If you have any friends in the neighbourhood, I can pick up from them too.”

Lee has friends. I have acquaintances by association. I’m not sure any of them would feel all right about a homeless guy dropping by to pick up their empties once a week. They probably don’t drink enough to warrant such service either.

I close the door and watch Richard push his cart down the street, the empties shaking against each other.

Lee’s still in the kitchen, creating. My stomach rumbles. “How much longer, baby? I’m starving.”

Dishes rattle. “A few minutes. It’ll be worth it. Do you want to light some candles?”

He’s taken my offer of sex later seriously. I should put on a nicer bra, maybe brush my teeth.

The room spins. Lee needs to come and listen to these crazy riffs. It’s like they’re talking to me, pulling at my heart, making me sway.

His head sticks out from the kitchen. “What?”

“I’m not hungry, baby. Come and sit with me. I’ll make it worth your while.”

He laughs, but the way he narrows his eyes contradicts the humour.

The clock says two when I get out of bed. My hair is stuck to my face, yesterday’s jeans to my legs. I sit on the edge of the futon for a few minutes, try to focus through the pounding. Doesn’t taste like I brushed my teeth last night. Such a hot mess.

I suck back a beer, eat a bowl of egg drop soup from the fridge. Hope it’s still good. Don’t remember how long it’s been there.

The edges of my brain become less fuzzy, my rolling stomach simmers. Give myself a once over in the mirror before jumping in the shower and running through the tank of hot water. It’s starting to take longer to feel better each morning.

Lee gets home from the gym just as I’m pulling on clean clothes. “Where’d that orange thing on the coffee table come from?”

A look fills his eyes, something like disappointment. “You fell asleep on the floor last night.”

He shrugs. My pride ruffles. All I did was smoke weed before I met him. Drink was his invention. He can’t judge me by it.

I reach out to nestle into his arm, but he turns away. Talks on his way to the bathroom. “I saw Ben at the gym. He and Molly are heading to Breakers to play volleyball. Want to join them?”

I can think of a six-pack of reasons.

We hit the court within seconds of reaching the rooftop patio. I miss a couple of spikes, run into another player on my team. Lee cringes, apologizes. Makes me feel like an idiot.

I excuse myself. “Back in a bit, okay? Going to grab some water.”

Molly leans in. “The match is almost over. Why don’t you finish it up with us?”

Not one to be babysat, especially by Lee’s friends, I leave. Take a seat at the bar. Part of me contemplates grabbing that glass of water and getting back on the court. The other part catches the bartender’s eye and orders a double Greyhound.

He nods, punches my order into his computer.  A grin shimmers on his lips. “How’re you doing today?”

Two drinks later, things have smoothed out. The guy sitting next to me at the bar is in town from England, and he’s happy to drink with me. We share the bar nuts while he tells me about the pubs he frequents back home. They sound terrific. And his friends much less judgmental.

Lee approaches, sweat pooled in the armpits of his shirt and over his brow. “That doesn’t look like water.”

“That seems to be happening more often.”

“What’s that supposed to mean?”

Lee shakes his head, changes tack. “The game’s over. Let’s get out of here.”

My body’s feeling good again. There’s no way I’m leaving now. “Why don’t you get a drink? We can stay for some appies before heading home for supper. Molly and Ben must be thirsty.”

The English guy chimes in. “I’ll buy you a drink, mate? What’ll it be?”

Lee shoots him a death glare. “I’m leaving. Are you coming, Heather?”

“No. I’m going to finish my drink. With this bloke, here. I’ll meet you at home, baby.”

He doesn’t seem to appreciate my attempt at an English accent.

I stop by the liquor store on the way home in case we’re out of beer. Decide on a bottle of vodka and a six-pack. My bladder is full, like three double Greyhounds and whatever-Paul-the-English-guy-bought-me full. The after-work crowd fills up the aisles in their pressed suits and skirts. Makes me wish it was easier to find a good job. Or any job, at that.

The lock on the door of the public restroom is broken, so I have to pee with one leg jammed up against it. It’s uncomfortable and I slip, falling on the filthy floor and cracking my head on the toilet. I’m not sure if I pass out. The night’s darker when I step outside.

As soon as I round the corner, I twist the top off one of the bottles. Take a large swig. Christ, it tastes good. Liquid gold. There’s a group of people with their shopping carts hanging out beside the liquor store. They’re laughing and talking, and my eyes well up with tears, which is ridiculous because I have more than they do. I rent an apartment with my boyfriend who loves me. Worships me, even. Sunshine finds us through our window. And my record collection rocks.

The voice sounds familiar. I turn.

“Are you all right?”

I touch my face. My hand comes away damp. “No. Not crying.”

My next step becomes a lurch as the edge of the sidewalk comes out of nowhere.

Richard reaches out to steady me. “Are you sure you’re all right?”

I nod, stagger away. Need to get home.

Our place is quiet when I walk through the door. Dark. The coffee table’s not where it’s meant to be. Trip over it, hurt my foot. Crack a beer. Sit on the steps. All alone. Look into the night.

There’s a note on the kitchen table from Lee. Says he’s staying at Ben’s because he needs some time to think. Think about what, I’m not sure.

Jennifer Todhunter is a number nerd by day, word fiddler at night who enjoys dark, salty chocolate and running top speed in the other direction. She can be found online at www.foxbane.ca, or @JenTod_. 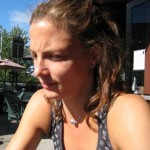