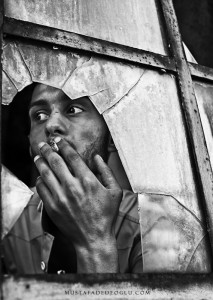 But now this white girl with dreadlocks is also staring at the gun, a cup of punch also in her hand, and Rona thinks that conversation is probably unavoidable at this point.

It’s a twenty-two, says the girl with dreadlocks.

Oh, says Rona, who did not know this.

Kind of a weird gun to put on the wall, says the girl.

Yes, replies the girl. It’s not even a nice one. It looks cheap.

There is silence, then, and Rona feels suddenly anxious. Everyone around them is chatting happily, with drinks in their hand, about social issues of various levels of importance, and Rona feels a strong urge to try harder, to try to connect to this girl with her dreadlocks, and her acid wash overalls and clunky looking boots.

It seems strange to put a gun on the wall, she says, marveling at the hard punctuality of her words, pleased with the small act of competence.

Do you not like guns? Says the girl, which seems oddly aggressive to Rona. Most of the people she has met here all have a strong dislike of guns, so she had assumed that this girl, too, would dislike them, and they could stand in silence for a little longer, both acknowledging that they were in the same political sphere, and that nothing more need be said about the matter.

The girl with dreadlocks bites her cheek and shakes her head. She says Yeah, in a long, extended way, sounding a little tired, or flustered, or both.

I know it’s like, an unpopular opinion, she says, but I personally feel that, with everything happening in this country, people should know how to use guns.  Especially, like, as a woman.

She looks at Rona, as if expecting some kind of confirmation. Rona nods her head, her hands suddenly sweaty, and takes a long drink from the punch. Something very strong and nauseous tasting near the bottom of the cup—tequila, she thinks—makes her cringe and want to spit, but she gulps it down. The girl with dreadlocks continues.

Like, fuck, I know. Violence sucks. Especially gun violence. I personally feel that, like, personal energy and vibrations, if people really focus on that stuff, can create peace in the world.  I’m totally all about that. But people should know how to defend themselves, you know? If some fascist pig rolls up to my house waving his block, I’m gonna be prepared, you know? Bang bang.

Rona watches the girl, who is making a shooting motion now, like she is holding a rifle, and she is feeling more nauseous—maybe from the liquor, maybe from the girl with dreadlocks—and she is wishing her cousin would emerge from one of the rooms now, wiping some substance from her nose, and take her away.

I was raised by pacifists, too.  Says the girl. I don’t like, not know about peaceful protest and stuff. But when push comes to shove? I’m going to be prepared. I’m a realist. You know? And people need to know how to defend themselves, you know? People need to know.

The girl keeps shaking her head, and Rona knows that she can either agree or argue, and she doesn’t want to argue—doesn’t think she could. So she nods as fervently as the girl with dreadlocks, saying yeah, yeah, but some guy in a crisp looking oxford leans over and says he’s sorry to interrupt, and starts arguing with her about some ballot measure, something about gun control, and Rona is left by herself to stare at the gun, feeling suddenly very heavy, thick with things she doesn’t know how to say.

Like how her brother Ali, back home, had said that too, that people should know how to defend themselves, when Rona found him in their father’s old study, holding the gun.  When she tried to make him stay inside. And later, how the police said that he had discharged it, when they brought his body back from the protest, except they didn’t call him Ali anymore, they called him Terrorist, and they asked her mother questions she could not answer, their hands on their guns.

This she could not say, so she just stared at the wall, wondering if this girl, or this boy, had every taken a silent car ride to the airport in the early morning, and left everything to live with an Uncle they did not know, in a country where people put guns on their walls and drink punch and wear overalls. She wondered if they had seen what a bullet could do to the face of a brother—the way a head could look like a smashed melon full of teeth.

And she is feeling very nauseous now, staring at this long-nosed thing on the wall. But she sees her cousin cross the room, her arms cinched tight against some tall white boy in a soft leather jacket, and she says bye quickly to the girl, who is not listening now, and she makes her way through the crowd of smiling people, in their smiling clothes, with their little plastic cups, and she is thinking that yes, people need to know how to defend themselves.

Sheldon Costa is a writer hailing from Post Falls, Idaho. He moved to Seattle in 2010 to study creative writing at Seattle University, where he was editor of the school’s literary and arts journal, Fragments, and helped create its online edition, Axis. He has previously been published in The First Line. 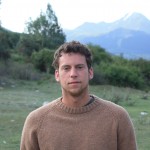