Divorced and in Love / Ham & Cheese by Claire Polders 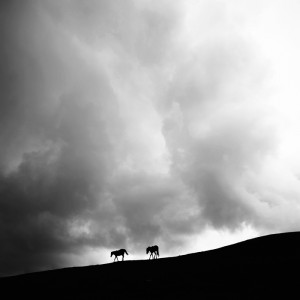 Divorced and in Love

My sister got divorced and I worried. For a while, she considered marrying her horse.

When she fell for a guy from church, things improved. She took hot showers again and stopped eating hay. Can I meet him? I asked. But that proved impossible. Her new love was Jesus Christ.

Our teacher, Mister Grau, was a dedicated vegetarian. To show his commitment to us kids, he grew a lot of unkempt hair. He really identified with animals. Meat is murder, he’d say. You wouldn’t kill a dog, right? There was an air of loneliness about him. He was unmarried.

One day he looked particularly sad. I didn’t ask him why because teachers were not supposed to share their sorrows with us. It’s possible that we were particularly rowdy as well. Who could say? Thing was, just before lunch, he asked what we had on our sandwiches. One classmate admitted to liver sausage. Another: baloney. A girl muttered, Corned beef. I would be eating ham & cheese and said so.

Ham & cheese? Mister Grau asked. Where does it come from?

The supermarket, I said.

His eyes blackened. Out of the classroom he stormed. Furious footsteps down the hall. Scuffling then yelling. You can’t… He returned with a rabbit, clutching the scared thing by the neck. Furry feet battered the air.

Meat comes from animals, he said. This is your lunch.

He slit the rabbit’s neck with a pocketknife. Blood squirted out.

I was glad our school didn’t have a pig.

Claire Polders is a Dutch author of four novels. She holds a double master’s degree in Literature and Philosophy and has studied at the Sorbonne in Paris. Her short prose has appeared in anthologies and magazines in The Netherlands, Belgium, and France. Currently she’s finishing her first novel in English. You can find her at @clairepolders. 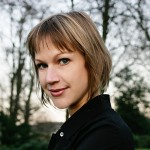