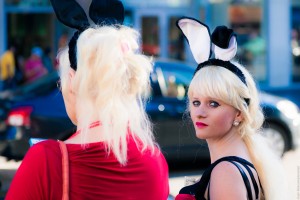 In Buffalo in 1983, Disowned Daughters tread in fear into their living rooms, holding their schoolbooks and buckling their knees as Black Boyfriends pull their hands out of theirs. Mothers, Aunts and Cousins wait for their arrival. They perch on broken coffee tables, torn sofas and TV cabinets. They wear short-shorts with panty hose. They wear high-heels and big hair. They wear Jesus-Loves-You leather bracelets. Disowned Daughters stand pigeon-toed with smeared mascara and thin sweaters. When Disowned Daughters gauge the room and realize they are all alone, they leave their bodies, step into the dining rooms, and peek inside.

What are your plans? Mothers ask, breathing hard through heavy lipstick.

Disowned Daughters look at Black Boyfriends who stare at the wall. Plans? The daughters say.

Yes, plans. Since you’re throwing your life away, you must have plans, Mothers say, crossing their arms to accentuate their cleavage.

Aunts and Cousins flex shoulder and thigh muscles, trying to pull the Black Boyfriends’ gazes to them.

I’m not throwing my life away, Disowned Daughters say. I’m going to college after I graduate, they say.

You just don’t get it, Mothers say, clenching their teeth. They stand up from the coffee table and saunter across the room. They drape their forearms across the fake fireplace mantel and jut out their hips. Black Boyfriends look at the performance and then look away. The world isn’t ready for your kind, Mothers say. Tell her, Aunts.

Cousins hop off the TV cabinets and strut in thigh-high boots to the center of the room. Last year, in 7th grade, Abbey had to go to a new school because she was seeing a black guy. No one would talk to her. Plus, the Bible says it’s not right. Right, Mom? they say, pulling denim out of their butts.

Aunts yank little New Testaments out of their bras. Second Corinthians, chapter six, verse fourteen, they proclaim.  ‘Do not be unequally yoked together with unbelievers,’ they quote and press the thin pages together and smash the book back into their bras. I didn’t write it, they say and cinch belts around their waists. It’s the Word of God.

Mothers grip and scratch the mantle as if to keep from lunging at their daughters. If you two date, mothers say, I will disown you. I will never talk to you again. You will not be able to live in my house. I will call all your friends, and I will torment them. Mothers get close to their daughters and pinch their chins with their thumbs and forefingers. If I see you, I will beat the shit out of you.

Mothers take their places at the mantle again. I’d rather see you in a coma, they say.

Disowned Daughters understand now. They stop peeking from the dining room. They glide over to where they stand, backs against the wall. There is a chink in their elbows, in their kneecaps, in their skulls as they return to their bodies. They lie down on the couch, causing Aunts to rise. They look once more at Mothers and at Black Boyfriends. They smile soft smiles at Cousins, and a tear rolls down their cheeks, though they don’t feel it. It’s too hard to fight, Disowned Daughters whisper to no one, and they cross their arms over their small chests. Their feet fall inward, and their toes touch. Their breathing slows, and their eyes stay open, and they go.

Thea Swanson‘s flash-fiction collection, Mars, is forthcoming this year by Ravenna Press. Her flash-fiction piece, “Gay-Bar Girls” was a finalist in the 2016 American Short[er] Fiction contest. Thea holds an MFA in Writing from Pacific University in Oregon. Her stories can be found in many journals including Dirty Chai, Fiction Southeast and Mid-American Review. She has taught English from middle-school through college. Read more about her writing life at theaswanson.com. 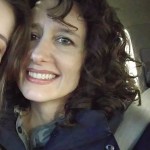