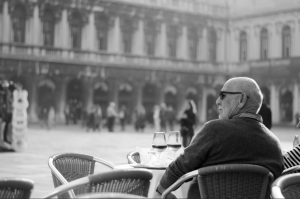 With aching bones and her tongue still tasting of the semi-molten strawberry ice-cream that Sanjay had given her after dinner, Anita stumbled onto a rocky terrain. Warm winds blew dust everywhere. Anita clamped her lips and peeked through narrow slits under her eyelids. But she had to brave the dust and open her eyes, for she could not believe what her narrowed sight had shown her.

The Rainbow Mountains of Zhangye Danxia, stood before her in gigantic high definition. The sun gave its ruby, amber, emerald, and sapphire stripes a life of their own. She had always dreamed of visiting them. The absence of tourists and the fact that she was dressed in a lilac and floral set of pyjamas, explained why she never passed through traffic, airports, flights, customs, trains and hotels. She relaxed, sat down and let the dust and wind mess up her hair. She was entitled to a good dream, especially after the week she had been through.

Dreams are never still and Anita’s was no exception. A slice of sea approached her and the mountains, bracketed by strips of sand and coconut palms. Moored among them was a houseboat carved from dark wood, straight out of advertisements for holidays in Kerala. Southern India drifted and fixed itself to Northern China, as if they were pieces in a jigsaw puzzle.  From the deck of the houseboat, a skinny, bald man, with a face framed into a look of permanent disapproval by his wrinkles, shouted at Anita,

“Of all places, this is where you turn up early!” He readjusted his black, thick, square-framed glasses to get a better look at Anita, and added, “Ridiculous!”

Anita’s ears and palms turned warm, almost sweaty, as they used to everyday she returned home from work and faced her father-in-law. She thought she had seen the last of him, when he died about five years ago. Anita turned her eyes away from the whole scene. Unless the miserable old goat came with clues about hidden treasure, he had no business in her dream. The ground beneath her feet began to float, dragged by the sand and sea. Her father-in-law continued to shout to her back,

“Since your parents have not managed to die yet, I am the one stuck with showing you around!”

He was wearing the same clothes he wore the last time Anita had seen him alive – a red chequered lungi and a thin short-sleeved white vest. Anita remembered the night well. Sanjay had made some fancy dessert from a cooking show. He had left no sugar for next morning’s tea. While gobbling up the whole thing, her father-in-law insisted that this was what happened in homes where wives focused too much on their careers and their husbands had to enter the kitchen. She had left half her dinner uneaten, for she had no energy to listen to, let alone argue with him. He screamed his last words to her the bedroom’s door as she buried herself in the thirty Constitutional Law papers she planned to grade for the night. They were, “useless, pointless, idiot.”

The smell of salt and dead fish made her want to throw up. The trailing and floating made it worse. Her father-in-law was shouting strings of words at her, punctuated with “Don’t forget”s and “I won’t repeat it again”s. The flying dust got in her nose and ears and dulled the colours of the mountains too.  Anita told herself that once she woke up she would never question Sanjay about the strange messages on his phone or the statement for an odd credit card that she had found. She would not even go through the post again. In fact, she would do anything to just wake up, to brush her teeth and wash away the taste of strawberry ice-cream from her mouth. She was about to cover her ears and kick herself awake, when her father-in-law cackled and said,

“I hope you ate something awful for dinner. That taste stays on your tongue forever.”

Ranjabali Chaudhuri’s work has appeared in the Timeworn Literary Journal, Iceberg Tales, and other online journals. She lives in London. 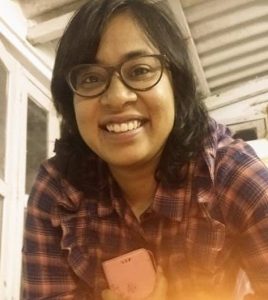