He told himself each time that it would be the last,
that she could cop for herself,
or find another errand boy.

But every time she called in those last years
(Junkie time: 2AM, 5AM)
Hammond would leave Esme sleeping,
or put her off with some story,
(Fletcher needs my help again;
Alice and Benny are fighting again)
and drive up to Harlem
to put the Horse in harness for her,
then back downtown to her hotel.

If the desk staff at the Plaza or the Metropolitan
knew who was delivering what to whom
they never let on,
and Hammond was always shown deferentially
to the elevator.

No matter how sick she was,
how badly she needed what he carried,
she always made a little chit-chat
(how’s every little thing?)
before she brought out her works
and got started.
As if, whatever else they were doing,
it was really a social call
that brought him to her rooms.

Hammond was old-school:
Hotchkiss, then Yale,
a Vanderbilt on his mother’s side,
and in all those nights
he never laid a hand on her.
But sometimes, after she shot up
and before she began to nod,
Lady would sing to him.
Blues a capella: “Clarksdale Moan”
or “Lord, I’m Discouraged.”
Real up-the-country primitive stuff,
connoisseur music.

And as she sang those old-timey blues
the dawn coming up though Lady’s windows
would discover Hammond weeping.

When Lady had been gone almost thirty years
and Hammond lay in Mt. Sinai near the end,
he had “Autumn in New York” on the tape deck,
and a vase of gardenias by his bed.

Benjamin Goluboff teaches English at Lake Forest College. Aside from a modest list of scholarly publications, he has placed imaginative work — poetry, fiction, and essays — in numerous small-press journals, recently Four Ties Literary Review, Stoneboat, Kentucky Review and War Literature and the Arts. Some of his work can be read at www.lakeforest.edu/academics/faculty/goluboff/ 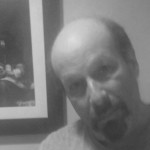