Because He Is by Dawn Bailey 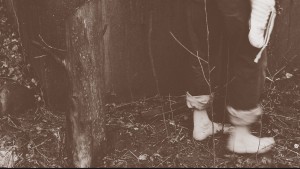 Jaxon is big, blond headed and red with summer sun. Ethan is shorter, quick and dark. His eyes wander from the road to the woods.

The leaves hang low, the shadows are stilled. “Where are we going?” Ethan finally says.

Jaxon stares ahead. He runs.

They run. Two and two and two: they breathe the way their sneakers pound. Together, every morning after practice, since they were small, they are side by side. I’m going to drive today, he has thought about telling Jaxon. But he doesn’t. He wakes up early. They meet outside, on the quiet morning streets.

There is no practice today. But Fall is coming. And they are running.

Jaxon veers aside. The slope takes them deeper into the hollow. The brush thickens. The vines tangle.

Where, Ethan is about to breathe-say again. But he sees the glint of black through the tree trunks. A cabin. The cabin is burned. Black sears rise against the still standing walls; the roof is gaping, broken in and still breaking.

At the edge of the clearing, Ethan stops.

In the distance the bluffs rise dark against the orange twilight.

Jaxon goes nearer, stepping over the splintered gleam of broken boards; the rows of their ragged edges bite like black teeth eating through the grass.

The boards on the porch creak. Are you coming, Jaxon doesn’t have to say to him.

Ethan pushes at the damp hair on his forehead. Are you coming, Jaxon used to say when they stood together on the edges of the bluffs, higher and farther above the ridges where the other boys were jumping from. Now, Jaxon never asks him. When Jaxon jumps Ethan never watches. He stands alone, with his eyes ahead, listening for the splash of the water.

Jaxon pushes on the door. The dark spills out, the shadow tendons turn red.

When Jaxon is drinking he doesn’t pass the bottle. Jaxon drinks too much.  He runs and he jumps and he falls too much. Jaxon tells his father to go to hell. Too much.

“It’s getting late,” he says instead. He hates the sound of himself saying it. But he is not saying, don’t. He is saying, it is getting dark and we have the whole way to walk home again. He knows Jaxon is smiling at him.

Ethan closes his eyes. He is waiting again.

He won’t hear the splash of the water here. Shadows don’t make sound when people fall into them.

One day last summer, late in August, Jaxon went away. He left his phone in the car. He left his drink in the car. But he took his fathers gun. For two days he stayed that way in the woods. What did you do, Ethan said to him later, when it was just another quiet morning.

With his arms swinging and his sneakers pounding against the dirt, Jaxon told him. I put the gun in my mouth.

One day last summer, when they fell asleep at the lake on the rocks and the rocks were smooth and hot against their skin, he woke up first. He looked at Jaxon laying there, red with the sun, closed- eyed and quiet. He imagined him in the woods, alone with the gun.

Without waking him, he’d touched his lips with his fingertips.

Ethan opens his eyes. He has sunk down, he is with the burnt things in the grass now. The sun is almost gone, the red is bled out of the hollow, marooned above the trees and above the bluffs, heavy with heat, lush with night.

Jaxon is here. He crouches down, quiet and moving when he bends, lighter and stilled where his eyes rise above the surface.

They look at each other, together.

Jaxon’s eyes are white, cut apart places. There is something in his hand. His fingertip brushes the cylinder of a lighter. His skin whispers. The flame jumps.

“What did it feel like,” he wonders aloud. The flame rises. He cups it into his palm. “When everything burned around them.”

Ethan lowers his eyes. He smells the heat of skin against rock. The gun is cold at his lips. The flame bleeds through the spaces between Jaxon’s fingers.

Don’t, he doesn’t say with the muzzle in their mouth, in his.

He puts his hands on Jaxon’s shoulders. He pushes.

The grass splashes. The burnt things crack. The flame flies out of Jaxon’s hand, away from them. On his back, Jaxon looks up. He is quiet, waiting. Ethan falls too. He falls forward, hard into the shadow where Jaxon is, to kiss him, hard on his mouth. Together, they are muffled, breathless, burned away by falling.

Dawn Bailey lives and works in the Ozark Mountains of Northwest Arkansas. She loves writing, trees, writing about trees, and drinking sweet tea. 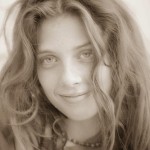