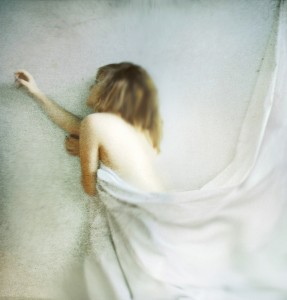 The old guy would not leave me alone. He liked it especially when I was upset. He drooled on me in the kitchen, when I was mad about having to prepare another facial scrub for my aunt.

“No,” I said, as my poor innocent body, simply being itself, dug me into a deeper hole. Unwanted youth is a problem with only one solution. “Beautiful day. Very happy.”

“Ah,” he breathed, getting closer. His head was bald as a butt. He might have been forty or eighty. “We’re needing a day off, are we?”

My hair was practically falling into the honey. Now was the time to look him in the eye and tell him that if he didn’t stop bothering me I was going to talk with my aunt. But I was desperate not to threaten anyone’s charity.

I had to feed the neighbors’ starving dogs. The neighbors had lost their jobs and left their four dogs in four wire pens in their yard, with enough food to last two weeks if I fed each dog one half-cup a day. “We’ll be back soon,” they said.

Just like I had never managed to communicate well with someone I was too nauseated by to look at, I had never had a positive experience with starving and abandoned dogs. But when they give you advice on starting your life over, they tell you to keep trying: Your intuitions have failed you.

Two of the dogs were big and black. They went crazy when they saw me, barking like firecrackers. The balding white dog was blind and got wet food. Then there was the brown dog with a carrot-shaped face. I couldn’t figure out a way to lower the food into their pens without spilling it, because they kept snapping at my wrists. They nosed the kibble up from the ground. There was a drought, so the ground was hard and not dirty.

Only the old guy and I cared about the Olympics. I love the Olympics more than I love my poor, charitable aunt, who was upstairs, rubbing pure estrogen into her face and bathing in skim milk.

The water in the swimming races was just staggeringly beautiful this time around, bulging and glossy over the swimmers’ heads in the slow-mo, then shattering all around like forming crystals. I could not take my eyes off it, and the old guy could not take his eyes off me. The trick to dealing with him was not to give him anything to respond to. But then I had to sneeze.

That cute American girl was just killing it in the backstroke, the water adhering to her like glue. I once tried to make a mobile of hot-glue snowflakes. You make them by squirting the hot glue into a bowl of water, which solidifies into gummy translucent nests. I wondered if I touched the tip of the hot glue gun to the water, would it electrocute me? It didn’t, but my friend, who had taken half of what I was on, said she could see my skeleton flashing in my arm. We laughed because we were so lucky, and she ate half of a glue stick.

“The loneliness you feel,” the old guy was saying, “It’s just another form of self-recognition.”

Because of the drought, my aunt had coated herself with Vaseline and then made me wrap her in bandages.

I went to feed the dogs. The blind one was whistling like a human. The black ones’ tongues were white, their saliva in frothy droplets on the ground.

I wanted to connect their pens so at least they could socialize. I put the little white dog in with the brown one, who started licking its head. I tried to pull up the wire fencing but it was baked hard into the ground.

They had barely any food left. My aunt was not sympathetic. She had spent all her savings on a machine that looked like a head-shaped microwave, that was supposed to make her as wrinkle-free and dewy-soft as a six-month-old baby.

The old guy had been training up. He was studying hypnosis and pick-up techniques. He said, “Remember a time you were happy,” and then gestured at his chest and face. “Describe that feeling to me.” I couldn’t look at him. I thought I heard rain, and time was streaming by in ribbons. Had he hypnotized me?

The brown dog and the white dog were gone. Maybe they’d stood on each other’s shoulders. The black ones snapped violently at my arms. I hopped into one’s pen. “Have at me,” I said, ready to be rent limb from limb.

It looked taken aback. I helped it get out, hoisting its gritty paws, then helped the other. They ran across to the vacant lot and disappeared into the grass.

When was a time I was happy? Not here, not now. It was the fourth of July and my friend and I toasted with peppermint schnapps. Little girls, we were obsessed with anything soft, and she swaddled me like a colicky baby. Her name was Sequoia and she was never long for this world. She didn’t just die. She went extinct.

My aunt came down and found the old guy licking my chest with his gray tongue. In the dying light, she looked so youthful it was like she hadn’t yet been born. “The neighbors are home,” she sang. “They’ve got a question for you.”