The Creak of Snow by Judy Darley

If Eilidh puts her face close to the bedroom window and breathes out, she can make the world beyond grow cold and fog-filled. She dapples her fingertips against the glass, creating small pools of light that shine sharp and ice-bright. The sky looks yellow today, swollen with clouds heavy with something chillier than rain, but it won’t snow here.

They’re in the wrong place for that. This southern city would grind to a halt if a few sparse flakes fell from the sky.

That’s what Franny says, anyways. It bothers Eilidh to think of her old gran managing the farm alone, without anyone to ride the tractor with. Who’ll jump out to drag the gate open, close it again once she’s through? Worry makes Eilidh’ chest tighten, forces her to grip the windowsill and swallow hard while her fingertips whiten.

She breathes in, breathes out, pictures the hills of Skye glowing purple and orange where heather and gorse have taken hold.

In the city where she and Mam now live, the hills are lined with shops and crowded with shoppers, regardless of the time of day. Small paths wind sedately through parks, creeping into roads where people rush on foot, by bike, in car or bus, hurrying to wherever they need to go. Here, even leisure time seems frantic.

Her mam has a job at the university, assisting foreign students who look as lost as Eilidh feels. Each day she sets off an hour before Eilidh, trusting her daughter to leave as the clock edges towards the school bell’s trill. The school itself is tall and grey, filled with teenagers who gawp whenever she dares speak. Increasingly she stays silent, ignoring them as best she can, gazing through the classroom window and daydreaming about the farm and the life she’s left behind. Sometimes she’s so absorbed by this that the teacher has to shout her name, making the others snigger. “Eyelid, oi, Eyelid! Teach wants ya!” Her cheeks burn as she stumbles over the reply to whatever question has been thrust her way.

Lunch hours are spent huddled in the shadows cast by the science block, trying to ignore the hooked glances and gibes that filter her way across the yard.

The only class she actually enjoys is art, when they get to prop up easels, blend colours, and pour onto pages whatever fills their minds. Eilidh paints glowing hillsides, bony trees scrabbling against the sky, and, just for the hell of it, here and there, a smattering of white blobby sheep with wee their black faces. She knows her paintings are childish in the eyes of the other kids, who are busy creating surrealist ink drawings of iguana-headed girls and botanically accurate studies of exotic flora. The art teacher, who is possibly older than Franny and a whole lot woollier round the edges, is too busy looking forward to the end of term to be bothered about her skill or lack thereof.

The boy who sits next to her in art class comes over and takes a look sometimes, standing behind her and staring into her painting as though through another window. She doesn’t mind. He’s another quiet one like her, cannie and self-contained. Occasionally he’ll point to some detail – a particular cloud or a wedge of wall on the painted hillside, and murmur: “Nice.” She wonders what it is about those particular sections that warrant such assessment, but returns his smile and carries on. His voice soothes her somehow, just as Franny used to be able to calm her out of nightmares and tantrums and the fright of storms, reshaping fear to comfort with a few words (“hear the thunder? That’s giants growling their promise to keep us safe.”). His presence slows her heartbeat until peace steals over her and she finds herself beaming at him from under her fringe.

She asked Franny to text before they packed up the car and left, but Franny refused. “My mobile’s for emergencies only, my wee sunshine. Besides, can you imagine these stubby farmer’s fingers tapping out messages on those little buttons?”

Eilidh can, as it happens, because she’s watched her gran’s deftness when knitting, and her firm gentleness with chittering ewes tangled to barbed wire fences, her fingers’ strength when working the animals free. It’s a sight that’s awed Eilidh more than once, seeing the sheep’s yellow eyes grow tranquil until the barbs are eased away and the creature can skitter off to join its flock.

“No, I’ll send you postcards,” Franny declared, seeming pleased with the idea. “So many postcards your walls’ll be full.”

They’ve only been in Bristol a couple of months and it’s already almost true, each one marked with just a sentence or two of Franny’s scratchy, barely decipherable words; a code for Eilidh to make sense of, that no one else will understand.

On her most recent postcard now stuck to the back of the bedroom door, Franny’s scrawl reports that it’s already white in the valleys – snow blooming like mushrooms in the crevices of trees. Eilidh can hear the creak of the snow underfoot, pictures the sheep exhaling mist against the glittering air. Most of them will be pregnant by now, ready to lamb early next year. She wonders if any will come over Christmas time when she and Mam are home. The stretch of time between now and then seems endless.

Eilidh closes her eyes, tries to imagine what her gran’s doing right now. If it’s bitter out, she might be somewhere sheltered, dyeing yarn sheared from the sheep in summer. Yarn dyeing is always one of Eilidh’s favourite jobs to help with – gathering the ingredients, mixing them in a pot over the fire, secretly pretending she and Franny are a pair of witches, even though she knows she’s too old for such games. She remembers the earthy aroma swelling out to fill the barn, the rich sweet smell of simmering berries, or the dankness of horseshoe fungus. The best bit is seeing the colour take, changing the yarn from cream to gold or purple, or a myriad shades of grey and brown. Most of the hues came from plants they’ve foraged – bog myrtle, bracken, birch bark, nettles, heather tops, and tree beards – the grey lichen that grows over branches and trucks, dripping down like cloudy water.

Eilidh blinks her eyes open. Overhead there’s a creak of footsteps, and a door slams in one of the neighbouring flats. If she doesn’t get a wriggle on she’ll be late enough to be put on warning. Worse, Mam might get called in and given a stern talking to by a teacher with half her qualifications and experience. Then Eilidh’ll have to endure the anxious looks, the half-smiles and tentative tiptoed investigations into her wellbeing, just as happened after Da left them way back when. The trick is to turn up moments late instead of minutes, pay the least possible amount of attention while there.

Eilidh unfurls reluctantly, stamps her feet against the floor half to get the blood back into them, half to say a sort of hello to the people who live downstairs. She slings her school bag over one shoulder, runs down the staircase to the ground floor stomping with enough force to make her teeth shake in her head. The effort cheers her up, somehow.

A voice calls out as she nears the entrance foyer, jolting into her thoughts. It’s the postie, a grin glimmering over his face. “Morning Eilidh.” He’s the only person in this place who says her name right, pronounces is Ay-lee, not Eyelid.

Postie always makes a joke of the postcards he delivers, claiming to have read all kinds of mushy messages from some boyfriend he’s dreamt up for her. “Says he misses you, he does, says his heart is smashed to bits” or, occasionally, as he hands her the card: “Mind your mum don’t see this one, Ay. Enough to blush a penguin pink!” Which, of course, makes Eilidh turn crimson and snatch it from him, even though she knows it’s from Franny and is probably all about foraging through hedgerows.

The postie is another newcomer to the city, his accent lilting in a way the local voices lack. He seems at home here, though, comfortable in his skin in a way Eilidh hasn’t felt since surrounded by Skye’s fields and clouds.

Today he’s holding a parcel in his hands. “Here you go, love. Birthday, is it?”

She shakes her head as she accepts it from him, recognising Franny’s handwriting on the top. The package has almost no weight at all.

He takes his time as he stuffs letters into each of the different flats’ post boxes, humming softly to himself. Eilidh hesitates then sits on the bottom step of the stairs, wrestling the tape from the brown paper.

The contents slither onto her lap, gold and mustard, scented with lanolin and hilltop air. A scarf knitted by Franny.

Eilidh returns his smile, wrapping the soft fragrant wool around her, warm and close. The farm suddenly doesn’t seem so far away at all. She breathes in deep, stands up and steps out of the building, ready to begin the journey to school.

Traffic rumbles as it eases through the narrow spaces, reminding her of Franny’s story of giants growling their promises to keep her safe. Far overhead the yellow clouds hang, heavy with something too cold to fall.

Judy Darley is a fiction writer, poet and journalist. Her stories have been published by literary magazines and anthologies, and has been performed on BBC radio, in cafés, in caves, in an artist’s studio, across the UK and in Hong Kong. Find her at www.skylightrain.com and @judydarley. 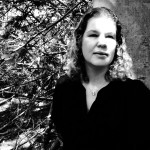