Crack a Brew by Mick Kulp

Crack a brew and watch the game

Watch the game and scream and yell

Reveal your life too much strife

Think a thought and read a book

Read a book and write some too

Write some too because it’s true

“Throw a flag,” you yell so loud

Yell so loud you wake the tot

Wake the tot your day is shot

The game is through your team lost

Your team lost the tot is grown

Tot is grown and on her own

Mick Kulp is a writer and father of two mostly grown children who have survived his shenanigans through smarts they inherited from their mother.

His creative nonfiction, fiction, and poetry have appeared in consumer magazines, newspapers, and literary journals. His first book, Random Stones: A book of poetry, was published in 2016. 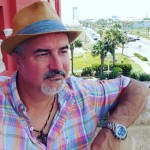