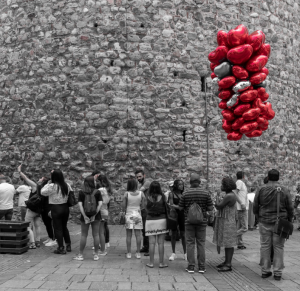 My friend’s conceptual wedding is held outside. It’s nice weather for it. My friend walks in circles around a Styrofoam pulpit. He says “this is the night of the day” into the mic at least a dozen times. I put my feet on the chair next to me—reserved for my no-show plus-one. An usher tells me I shouldn’t be rude. I say “I’m just getting into the spirit of the performance. It’s conceptual. I’m not really a guest. I’m the idea of a guest. The archetypal boorish guest. All part of the show.” The usher is satisfied with this answer.

The minister turns her back to the crowd and blows a whistle three times. A shaman joins the minister and they both say “shalom.” My non-practicing Jewish side is a little offended at the appropriation. The shaman exits the stage and starts eating soup alone in the reception area. It’s making me hungry. A man behind me whispers “This is so edgy. Like, what’s with the soup?”

The bride rides up on a bicycle. She’s dressed in a white latex body suit. She begins disassembling her bicycle. It takes close to twenty minutes. My friend adjusts his tie and picks his teeth at the Styrofoam pulpit. The crowd checks e-mail and Twitter on their phones. The shaman is already on his second bowl of soup.

Eventually, the minister turns around and says “peace be with me.” The crowd chants “and also with me.” I fumble with my program, a smidge embarrassed at missing my cue. I look to see what’s next: apparently we’re all supposed to cough after the minister finishes some countdown thing, and then we say “damnation” as the happy couple makes their exit. Okay, I can handle that. I sit forward and try to figure this thing out. I want to know why my friend has decided to have this conceptual wedding. I wonder what the concept is. He’s smiling near the Styrofoam pulpit. He has acquired soup of his own. Did the minister give it to him? Where is all this soup coming from?

The bride has begun reassembling her bike. She seems better at reassembling than disassembling. The DJ turns on some Nina Simone but then does that disc-scratch thing and switches to some bullshit contemporary band. Maybe it’s Daft Punk. I don’t know. New music all sounds the same to me. There’s another disc-scratch and then the DJ begins mumbling into a microphone: “Happy wedding. Happy wedding. Happy girls. Happy boys. American dream. American dream. American dream. American dream.” It goes on like that until the bride remounts her bike. She rides away from the Styrofoam pulpit, coasting toward the reception area to join the shaman and his soup. The caterer is setting up some plates and silverware, so I know the reception is imminent—the ceremony must be ending soon. My stomach growls. The DJ says “Soviet dream” and then disc-scratches back to that bullshit contemporary band.

The bride punches the shaman in his face. His nose bleeds, and he sneezes onto her white latex body suit. I think the punch was planned, but the bloody sneeze seems unscripted. She kicks her bicycle and walks back out to the ceremony. She does a beauty queen wave and saunters up to the Styrofoam pulpit. My friend puts down his soup, and the bride takes his hands.

The DJ stops the music and all I hear is the sound of crickets. I wonder if they are real crickets or a sound effect. I think they’re real. Yes, they’re real. I think I’m starting to get this conceptual wedding now. Maybe. Maybe not. I imagine some museum curator talking in a breathy half-whisper so as not to disturb the other gallery patrons: “Next we have an original piece from the bride and groom. It satirizes matrimony while simultaneously embracing its ritualistic origins. The artist sought to distance the bride and groom from the symbolic act of marriage through a series of new symbols, each designed to iconoclastically overturn the institution while still celebrating its core tenets.”

The minster starts at ten and counts backward. When the minister gets to “three,” she takes a step back. She says “two” and takes another step, moving behind a large tree. Out of sight, she repeats “two” over and over. The couple look at one another and smile. The bride wipes some of the blood from her latex body suit and says “sorry.” My friend says “you look beautiful.” She gives him a strange look, as if he’s never told her this before. She says “thank you?”

They continue to stare at each other. They continue to smile. I’ve forgotten my hunger. I hate soup. I still have no idea what the fuck is actually happening. The imagined museum curator tries to explain again. The concept of this conceptual wedding drifts away from me, but I know that I want to be a part of it. I take a breath and my eyes water. The minister keeps saying “two.” She gets louder: “Two! Two! Two!” I know that she’ll finish soon. She will reach “one.” Then we’ll all cough and say “damnation.” We’ll do dinner and dancing and go our separate ways. It’s inevitable. Any moment now. “Two! Two! Two!” I say “three” to myself softly, and I imagine standing at the Styrofoam pulpit. I imagine that I am loved. “One.”

James R. Gapinski is the author of the novella Edge of the Known Bus Line (Etchings Press) and the flash collection Messiah Tortoise (Red Bird Chapbooks). His short fiction has appeared in Heavy Feather Review, Hobart, Juked, Monkeybicycle, Paper Darts, and other publications. James teaches for Southern New Hampshire University’s MFA program, and he’s managing editor of The Conium Reivew.  Find him online at http://jamesrgapinski.com and on Twitter @jamesrgapinski 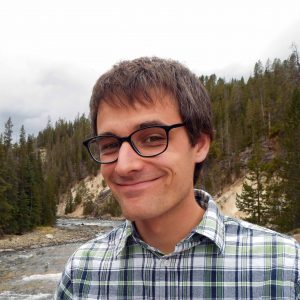