The Codex Veritatis by Molly Etta

Some characters can hear your hand rifling through the pages of their being. The sound may hide among the rustling of leaves — but there it is, if you strain your ears. However, our protagonist is Anthony, who does not listen for such things. When the wind brushes through the hemlock outside, he does not hear paper between an unknown reader’s fingers. He only hears leaves (needles, rather), as he turns his key in the front door, and the hemlock’s boughs whisper overhead.

You wouldn’t call Anthony imaginative. His few forays into imaginative territory only produce a feeble kind of nightmare. He pretends that his routine is a monster: a hulking beast encrusted with lesson plans and grading rubrics, its eyes two C’s, its teeth a jagged row of pluses and minuses. When Clark wants a story before bed, sometimes Anthony regales him with tales of the beast. He avoids mentioning how it seems to resist the confines of its story as it devours substantial morsels of Anthony’s life. For instance, although the weekend has finally settled into view, Anthony will have to force himself out of bed at dawn for a conference out of town. He trudges through the hall, loosening his tie, and the beast leers from the shadows.

Anthony’s sister is visiting, and he can hear a faint suggestion of her voice whispering through the walls. Bridget must be telling Clark a story. Anthony listens, leaning against the wall outside his son’s room, just out of sight.

Bridget inhabits a different world. To her, the branch nudging the window easily evokes the scratch of a nib across notepaper. (It goes without saying that she knows you’re reading this right now.) When Bridget tells stories, no grading beasts enter the picture. Her head brims over with wizards ensconced in holm oaks, and mystical boats draped in white silk.

Some of this story will consist of Bridget’s fairy tale. Bridget is a liminal kind of character, who has persuaded herself that she is also an author. Or, at the very least, she will masquerade as an author for the purpose of the next several pages; she will always have a pen or a pencil in hand so you can identify her as such.

Nothing and a lot will happen between these two stories, one wrapped around the other.

“There were once two knights,” begins Bridget, clicking her pen. “The Red Knight and the Blue Knight.”

Bridget tells her nephew about the two knights who lived in a wealthy kingdom a long time ago. There was also (of course) a fine noblewoman at court, a certain Lady Pavo, who always wore a crown of peacock feathers atop her golden hair. A great many knights were eager to obtain Lady Pavo’s hand, or at the very least, her favor during tournaments.

Lady Pavo, however, tended to avoid betraying particular signs of attachment to any of the knights. But, pressed by expectation to accept one of her suitors, she proposed a challenge. She said that she could only ever give her heart to the man who could bring her the Codex Veritatis.

“That is a sort of book, Clark. ‘Codex’ is just another word for ‘book’,” says Bridget.

“And what about ‘veritatis’? What does that mean?” asks Clark.

“Truth,” says Bridget. (Clark makes discontented noises.) “So, the knights prepared to seek out the Codex Veritatis.” She explains that the Codex (according to rumor) lay hidden in a golden chest, in the Grim Chapel, atop the Dolorous Mountain. It was said to be a very precious object, with purple pages, and lettering in golden ink, all bound up in ivory studded with jewels.

Lady Pavo wished the knights good luck before they set out into the wilderness. And the Red Knight chose this moment to tear holes in the Blue Knight’s saddlebags, so he lost all of his provisions as he galloped off into the woods.

“Oh, don’t worry so much, sweetheart,” says Bridget. “The Red Knight is only playing a little trick. He doesn’t mean any real harm. At any rate, as he realized he had no food left, the Blue Knight took out his bow and arrow to go hunting for his dinner.”

After much fruitless searching, he encountered a bedraggled pheasant, much the worse for wear as winter approached. It would not provide the Blue Knight with much nourishment, but it would help him survive. And so, the Blue Knight drew his bow, and pulled back the string — and then — the pheasant opened its beak and cried, “Wait! Please don’t shoot! If you spare me, I promise I will reward you handsomely.” Being the most soft-hearted of the knights, the Blue Knight did not simply spare the bird, but fed it the last of his bread. The pheasant was very grateful for this kindness and lowered its head as though to bow. “Thank you, Sir Knight,” it said. “And in return for your generosity, I will provide you with some aid in your quest, for I know what you seek …”

Anthony has been stepping away slowly, so his footfalls will not creak too loudly across the floorboards. He drifts toward the kitchen.

Having heard enough of Bridget’s stories in the past, he already knows how this one will end.

The pheasant will probably instruct the Blue Knight to refrain from shooting whatever other creatures he should happen to meet at the Dolorous Mountain, because they will actually be Lady Pavo’s other suitors who have failed at the same quest, consequently transformed into squirrels and rabbits (et cetera). The Blue Knight will spare and then be assisted by a series of animals.

And at last, the Blue Knight will make it to the Grim Chapel, where his final animal helper will assist his efforts to get ahold of the codex, and he will bring it back to Lady Pavo and live happily ever after with her. The wicked Red Knight, meanwhile, must have his due comeuppance at some point in the narrative. He will ignore the pheasant’s warnings and perhaps be eaten up by a monster with jagged teeth and hollow eyes like two C’s.

As Anthony cracks open a beer, Bridget shuffles into the kitchen herself, to brew a pot of tea. She leaves the kettle hooting as she scribbles a new tidbit of fairy tale down in her notebook.

“Ah, hello, Anthony,” she says, as Anthony takes the poor abandoned kettle off the stove for her and pours its contents into the mug by her elbow. Bridget stares absently at her notebook.

“You didn’t seem to think very much of it,” says Bridget, who has keen ears, after all, and tends to know when she has (or has lost) an audience.

“Well,” says Anthony apologetically. “As you know, I’m not the best judge.”

Bridget closes her notebook and contemplates her brother. “Why’s that?” she asks.

Anthony’s glance falls as he considers, and he cannot help but notice the peculiar fashioning of his sister’s notebook. It is bound in snowy white leather, with a border of tooled circles and diamonds, painted to resemble varicolored gemstones. Pinpricks of white pigment suggest reflected light (incongruous in the dimly-lit kitchen). A woman’s sunken profile decorates the center of the cover and stares at its lower right-hand corner, as though to urge the reader to open the book.

Anthony averts his gaze. Too many complaints clamor for attention. “I guess I’ve always found most fairy tales kind of ridiculous,” he says. “Nothing really holds up to close examination. Like, what happens to the Red Knight, again?”

“The Red Knight? He meets the pheasant and shoots at it, and –”

“Aha! There. That’s the problem. If you or I met a talking pheasant, wouldn’t we just know to help it? Given all the fairy tales we’ve all heard, wouldn’t any idiot know to help something as clearly enchanted as a talking animal?”

Bridget pauses and thinks. “He can’t realize something like that,” she decides. “If the Red Knight realizes he must be kind to the pheasant to get his reward, he would also have to acknowledge that he is in a fairy tale. He would have to recognize himself as nothing more than a character.” Bridget considers this difficulty, apparently warming to the idea; her hand wanders towards the pencil tucked into her hair. “You could argue that the Red Knight, by being cruel to the poor pheasant, actually asserts his will, after a fashion. Refusing to help the bird becomes a way of reassuring himself of his own existence, as something more than a mere character bound to a particular set of fairy tale rules and conventions …”

And with that, Bridget burrows ecstatically once more into her notebook to scribble something down.

“Bridge?” tests Anthony. No response, just the scratch-scratch of her pencil, the honed graphite itself like the pheasant’s beak, scraping the page in vain for some kind of nourishment.

Anthony notices that Bridget’s delicate scrawl is much too faint against the maroon hue of her paper. She hasn’t thought to write in golden ink. How fitting, that the Codex Veritatis, the Book of Truth, would be golden and glittering in a fairy tale, but faded and grey in life.

Anthony wakes up at dawn the following morning. He leaves a note for Bridget with instructions for Clark’s breakfast, then catches a cab to the train station. The pavement around the building is bound by a moat of melting snow.

Anthony does not much envy the thought of shivering outside, but he is the kind of man who needs to be on the platform at least ten minutes before his train’s arrival. He goes to the station’s kiosk to purchase a coffee before waiting in the cold. A young woman stands wearily behind the register, her bleached hair lusterless beside her white uniform. A couple of tattooed peacock feathers trail out of her collar and around her neck. She winks at Anthony as she hands him his coffee.

“With what?” asks Anthony.

“I don’t know. You just look like you could use it.”

Anthony attempts to muster up a smile.

He wanders out onto the frigid platform, pressing his palms to the foam cup for warmth. Icicles dangle from the iron beams overhead, glinting in the early morning light.

It happens now. There’s a pigeon. It’s gone to chase some crumbs strewn across the train tracks, and gotten itself stuck. Its wings tremble and stir the air, but its talons remain fixed to the ice beside the track. A few grey feathers mingle with the sleet as it struggles.

Anthony sips his coffee and grimaces as he watches. If he throws something, he wonders, could he knock the poor bird free?

Its head swivels about, and one of its eyes — red-and-black, like a hot coal — seems to focus directly upon him. But Anthony knows he must be imagining things, since the pigeon clearly has more urgent matters to contend with than the strange human watching it.

And then, its beak snaps open and closed.

Anthony gawks. He glances over his shoulder, as though he thinks the pigeon has meant to address some other tired commuter. But the platform is empty. Not a witness in sight. Anthony stares at the pigeon, and the pigeon stares back.

It rustles its feathers once more, as though for emphasis.

And Anthony cannot think what to say, except:

Nearby, the fronds of evergreens whisper together.

Molly Etta is a graduate student in Comparative Literature and Medieval Studies, living in the San Francisco Bay Area.  Her stranger thoughts about Arthurian romances and the like will tend to manifest in her creative writing.  You can find another recent short story of hers in the May 2016 issue of Metaphorosis Magazine. 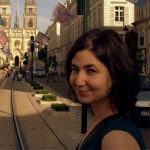