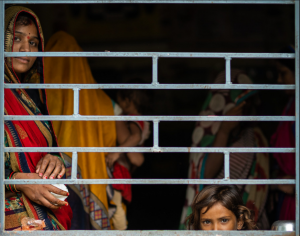 The imperfections stitch together to make the whole, he hand-made it, of course. You need to know what to look for, but there’s been thought behind the position of every piece, you can tell. If you run your fingers over the calculated roughness of its surface, the parts not completely sanded down, the places where the lacquer bobbled, it could feel like the ridges of your fingertips or the wrinkles that have tacked themselves around his eyes like unfinished shisha embroidery. The buttons are shiny plastic, polished but not as reflective as the mirrorwork you were teaching when you first met. There’s a silvery one with an anchor you might remember from his slightly-faded navy-blue linen blazer that he wears to the church across the road from your temple, the ones you liked to rest your palms against while you straightened his striped silk ties. If you pressed your face against the heavy wood that secures them, you could inhale the muskiness of his aftershave, the sandalwood of the soap you gave him. Its weight could press against you, like his curly head against your saried thighs while watching Strictly Come Dancing, like his naked thighs against yours. You would leave this frame here at the recovery cafe, with its newly captured photo of your craft circle beaming with their completed projects. You could post the matching one to him, with its picture taken so close to the camera it’s only glimpses of cheeks and parted lips. He might have forgotten it now he’s gone back to his wife.

Anita Goveas is British-Asian, London-based, and fueled by strong coffee and paneer jalfrezi. She was first published in the 2016 London Short Story Prize anthology, most recently in Bending Genres, Flash Frontier and Third Point Press. She’s on the editorial team at Flashback Fiction, an editor at Mythic Picnic’s Twitter zine, and tweets erratically @coffeeandpaneer Her debut flash collection is forthcoming from Reflex Press, and links to her stories are at https://coffeeandpaneer.wordpress.com 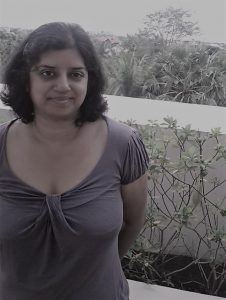