In Your Father’s Backyard
by Christopher DiCicco 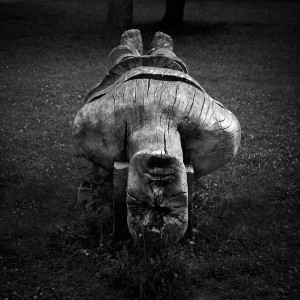 The girl Sara who sings while at work needs to stop it with the song “I’ll be there” because it’s killing me. I’ll die if she doesn’t learn a new tune.

She sings like something’s there, something special, like she knows a place where people wait around all day just for you—and the song, her voice, it reminds me I haven’t found anything like that, that maybe I should.

The girl who sings while at work is not a bad person or my first choice, but at dinner, we talk about her father. She orders clams and I drink most of the wine without offering any.

Do you have another bottle, maybe of white? she asks. I pretend not to hear  because I don’t want the subject to change. I want to know him, her father.

She mentions he had everything he ever wanted, that he hid it away.

“I’ll be there” says her father is a horrible man, that I’d hate him. She stares at my empty glass, says her father drank an awful lot too, that I could thank the good lord I’d never meet him.

He lives far from here, she says, near Mexico.

I remind her we’re not far from Mexico ourselves. She giggles, says—Yeah, but when I think of my father, I think of desperadoes and buried treasure. I think of loot hidden in the hills behind my father’s house.

Your backyard sounds like a treasure trove, I say.

According to my father, she says, it’s there.

Don’t you believe him?

Oh, I have no doubt he did it. I just think he’s the meanest man alive. Who has everything they ever wanted and buries it somewhere for someone else to find?

She drops a clam shell down on her plate and the clink sounds like a gold coin or maybe something breaking.

Inside my pickup truck I open the other bottle of wine, stare at the napkin in my hand. Scribbled on it are the words, Treasure Father, 97 South Water Lane, Ten Springs, New Mexico.

Her father’s address is an X on my map, which I’ve made with a thick black pen, repeating the process—X X X—until there’s no mistaking the importance of my destination.

Around the X are details put there by the map-maker: foothills, valleys, ravines, mountains, a river. Her father’s backyard has it all.

And really it isn’t that far, maybe a night’s drive, eight hours tops. I’ll need that time to imagine exactly what I’ll be finding, what I’ll being do with it when I finally have it.

“I’ll be there” says her father was super smart with a hell of a lot of sad mixed in, that he was loving and crazy, with a broken heart he didn’t bother to repair.

Empty heart, I say—because I understand before she says her mother died that it wasn’t broken.

There’s a difference, I tell her.

When “I’ll be there” says, He just cried all the time, I mean, go out, Christ, find someone new, if not for you, for your family’s sake, right?

When she uses that singsong voice of her’s, like it’s the soulful chorus of the man’s life, a thing her father failed at—I know why he liquidated her mother’s inheritance, buried whatever it was somewhere way the hell out in his backyard.

“I’ll be there” says he’s hidden it in the desert somewhere behind their house, maybe up the mountain between her backdoor and her father’s favorite hunting spot on the ridge.

It’s probably across the river in Mexico, she says. My parents loved it there.

Probably, I say. What did he hunt?

She shrugs, says, He never bagged anything, not for all the trouble it took him, spent all that time alone with nothing to show for it.

He didn’t really start until after my mom died. Probably wasn’t even hunting. Probably had himself a whore.

She smiles like it’s a wonderful joke, her father and his alone time, his possible woman.

Then “I’ll be there” says, He’d walked straight out the backdoor, up the mountain  and be gone before I’d even get to say bye.

She says it like it’s a bad thing, like her father wasted the better part of his life doing something even more stupid than playing daddy to a terrible one-song daughter, so I shake my head because I don’t want her know I think the world of her father. I don’t want her to guess he’s going to give me something worth being there for.

I want it all to myself.

Inside her father’s hunting lodge, I find nothing, empty bottles, pictures. It’s sad, but the couch is by far the saddest. You see where he wore it away, sleeping, turning, reliving old dreams, ones he probably shared with his wife. It’s bleak, the lodge, enough so I want to leave, go back to work, apologize for not showing up the last two days—but the pictures, of her father, they’re great.

Because he’s not alone. Not in any of them.

Her mother’s there, in everyone. A lot of the photos show them crossing a river in a canoe. They’re kissing, holding each other, smiling by a tree. Always across the river, in Mexico, boat tied to the same tree, every picture. It’s gnarled, close to the river bank, looks like a Mexican Pine.

And I think it’s Christmas, finally at last, because I know where he hid it.

I use a her father’s map to find the boat, repeat the process of marking my  destination with the X, unpin it from his lodge wall, fold it, put it into my pocket. Done.

Later, when I pull it out again just to make sure the X is still there, I think of Sara’s mother laughing, drawing a little boat on the map to mark what she loved so they’d never forget where it was, then I picture her father covering up her little drawing of a boat with a picture of her still smiling in a little pink tee, so he’d never forget her.

It makes me sad to think of him in his cabin, crying, dreaming about what he had. I hope I find it, something better even. I hope it’s not what I think it’s gonna be.

I think of him, his wife, about them smiling in the photos, their daughter singing “I’ll be there” and wonder where I am and really just where is it I think I’m going.

Later, when I untie their red canoe, my hope is that it works long enough to float me across, that I don’t drown in something so old. I can find my own way back, once I have it, if what I want is there, if it’s not what I think it’s gonna be.

Beneath the Mexican Pine there’s a piece of frayed rope. It sits where it sits, tied around the trunk, not enough to secure to. I drag the canoe, sit it down by the tree. I wonder if storms, flood waters, if time itself, raised the river high enough to wash away the bank at the roots, if I won’t have to search for what her father hid so long ago.

It might not even be here if that’s the case. It could have washed away down river. Then, at least I can delude myself, keep thinking whatever it is I haven’t found is still worth looking for.

I find it after two hours of digging. Two hours of anything is enough and I’m glad her father must have felt the same way.

I open the bottle of wine, drink.

In my hands, pictures of happier days, love letters signed XOXO, a pile of dirt. Most of what’s here is ruined. It’s what I thought it would be—it’s everything her father had, probably the most expensive bottle of wine I’ve seen.

There’s a couple of signed checks at the bottom. Worthless. They have to be. It’s only the worthless stuff you bury that lasts.

I toss the bottle back in the hole when I’m done, leave a swig for someone else.

When I drop it on her desk over a week later, telling her it’s shit anyway, I think she looks surprised that I found it. It takes awhile for the dirt to stop pouring out over all her papers. I think she must be in awe because when I sit down in my chair in the cubicle next to her’s, I don’t hear her singing the same song.

It’s “The Boy is Mine” followed by “She Loves You” but it’s too slow. She keeps missing the notes.

So I hum along because I’m afraid of what I’ll find if I don’t.

Christopher David DiCicco loves his wife and children—not writing minimalist stories in his attic. But he does. It’s something he has to do, like sleeping or eating fish. His work has recently appeared in Nib Magazine, Intellectual Refuge, Sundog Lit., Cease, Cows!, Bohemia Arts & Literary, Gravel Magazine, Bartleby Snopes, Litro Magazine, First Stop Fiction—and is forthcoming in The Cossack Review, WhiskeyPaper, Flash Fiction Online, Penduline Press, The Story Shack, HOOT Review, and Superstition Review. Follow him on twitter @ChrisDiCicco or visit him @ www.cddicicco.com 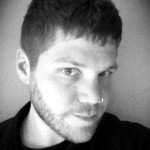