Cannibal at the Counter by Colin Dodds

Somewhere on the royal road to madness

he stops for a sandwich

At the diner’s glass aluminum door

a bell rings, a smoke alarm chirps like a tern

He brushes past a stranger

At the counter he’s served a sandwich

filled with what he’s told is pastrami

Only much later, does he learn

the stranger lifted a hair from his coat

that the kitchen used to vat-grow his double

whom it murdered cured cooked and fed him

to discredit him as the worst sort of cannibal

He only wises up years after

when he goes to the ocean alone

to confront a ubiquitous implacable beast

to learn the laws of which he’d lived in ignorance

and to cure himself of a terrible nausea

Colin Dodds is an author, poet and screenwriter. His writing has appeared in more than 200 publications, been nominated and shortlisted for numerous prizes, and praised by luminaries including Norman Mailer and David Berman. He lives in Brooklyn, New York, with his wife and daughter. See his work at thecolindodds.com. 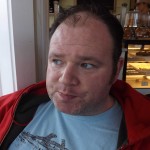