The memory sparked and faded, like the sharp inhale it awakened within her lungs.

It wasn’t an abattoir, but it was similar. It was a bleak place. All long cement walls and industrial austerity: exposed plumbing and wiring, Hazchem signs, grimy utensils of the macabre. A boiler room? No. Not quite. A wrought-iron stable, maybe, but if only for the horses of the apocalypse.

Nonetheless, her surroundings were a hazy vignette framing the contraption of particular interest to this world’s sadistic makers.

She didn’t know who these makers were, but somehow she knew that they were.

She also had an uncanny awareness of their focal creation and its design, without evidence of knowing how – it was simply a knowledge that was weighted in her guts by a definitive sense of damnation.

It was the barrel. A crudely built container. Huge, and yet tiny given its what and why. To the more lucid and less precognisant, these machinations were revealed only by sickening sounds crawling out of the belly of the inanimate beast: squelching, grinding, and the vile snapping of joints just like popping candy. Through the weakened walls of the vesicle bled bodily debris in every flavour. Upon the floor, a noxious pool of humours and gristle formed a stagnant ring around its base, coagulating and humourless.

The execrable existence of the trashcan spelt her end, and smelt it too.

“A harbinger,” she almost chuckled, but it came out an exhale heavy with phlegm and fatalism.

Imminent death was not her concern – frankly, the more imminent the better. It was the gruesome manner of death. She could accept the logic of an accidental death, the desperate choice that is suicide, and most possibilities in between. But this torture was gratuitous and arbitrary; a means to no end. It appeared before her without history or future, an aimless blitzkrieg driven recklessly beyond the controls of love and hatred, or even politics and religion. It was a vitriolic violation of semantics, a desecration without doctrine.

She wanted to salvage one last comfort – an ultimately inconsequential modicum of choice. She turned her attention to the pursuit of any other option, suddenly aware that time was an elusive luxury, or perhaps that she was being chased by an impending fate.
She was lured towards a nearby Hazchem sign. This particular one was plastered next to what looked like an emergency shower station, but the faucet was dripping with a foreboding substance tinged puce in colour, and that had appeared to have corroded most of the metal drain grate beneath it.

Adrenaline-fueled, she pushed the tap down in one swift motion, gasping in anticipation of an agony, a most excruciating evanescence. It never came. The fluid ran down her body as comfortably as warm water. She waited a minute or two, eyes shut tightly, refusing this defiant reality, before turning her face into the stream, wildly gulping in mouthfuls of what she hoped to be a lethal ingestion. It glided down her throat and through her veins like honey whiskey.

She lifted her hand from the tap, trembling violently and dripping violetly. She was furious with causality as the drops of the toxin singed the floor right by her feet, a further insult. She could be ravaged of most rights, but it was an existential offense that she could lose the right to die, despite logic and natural law. Fatalism had given up on allowing her an illusion of free will, a blatant and heavy-handed affront; a defiance of design.

She needed to try again, but she felt she would soon be surrendered to the main attraction. She needed this attempt to count, and so her attention darted past an electrical generator, a rusted toolkit, a furnace, and even a pitchfork she felt would be perfect for gouging her eyes and or deadening some synapses. Too haphazard a hazard.

And then she spotted a large exposed wire hanging from the ceiling above the furnace, fastened into a noose. Double-whammy.

She climbed atop the brick furnace without hesitation, and eagerly slung the makeshift noose around her neck like it were a boa. The hastening of her breaths taunted her desire for them to cease. She could still hear the wretched soundtrack of death as if it were churning through her own cochlea. Within her lungs thickened a pixie dust of collected last breaths, a chorus she wished to join.

The inhale was sharp—a spark—and the memory faded.

Alex Creece collects teeth and other biohazards. She is a sci-fi spinster whose frightful existence is probably random number generated. Sometimes she bleats into the unforgiving abyss, and it echoes here: https://www.facebook.com/alexcreecewriting/ 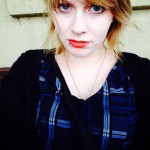