What They Brought By Lynn Mundell 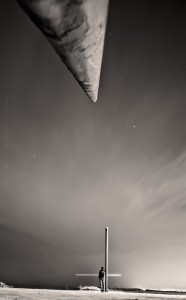 Roddy dropped the sock monkey into the metal capsule, along with two energy bars and the rubber disk he’d found in his mother’s abandoned nightstand, which he would learn much later was a diaphragm, not a collapsible cup.

Others filed by with more contributions to the capsule, serious as mourners at an open casket. Ann tossed in a lace bra from the old days; Mr. P fished it out again. Lew’s fro pick slid across Kaori’s framed photo of her father, one of the first men to go on a mission and never return.

Roddy’s own father had left a year ago after the water in the tower plummeted and it became too hot to go outside during the day. Roddy had brought his father’s medal, but he continued to roll it between gloved fingers like a good luck charm, until it almost felt like it was burning him.

Under the spotlight, Mr. P was motioning everyone to hurry. Roddy’s helmet was secondhand and its radio was on the blink again, so he mutely watched his classmates collect the last of their things: a pair of glasses, some square coins, a water vest. In their white suits they struggled through white sand, sinking up to their calves. Roddy slowly sank, too, a boy falling through an hourglass.

According to the watch on his suit, they had five minutes left. Sweat itched his forehead, but then he sensed before he saw the shape hurtling down the dune to his left. Out of the dark his sister seemed to skip across the sand, perhaps because she was so small. Maya stopped abruptly next to him and he patted the top of her helmet. Together they watched Mr. P drop an old packet of flower seeds into the capsule just as the spotlight began to flicker and then die.

Roddy couldn’t see or hear anything around him now as Maya frantically tugged him down to where the others would be buckling themselves into their seats. The radio in Roddy’s helmet cut back in at the same time the engine roared.

Still Roddy hesitated, staring up at the faraway blue planet, their new home years from now. He’d heard it was nearly three-quarters water. They said that its people were friendly.

Lynn Mundell is co-editor of 100wordstory.org. Her work has appeared most recently in Flash: The International Short-Short Story Magazine, Eunoia Review, and Counterexample Poetics, with more forthcoming in October in Blink Ink and The Fable Online. Lynn lives in Northern California with her husband and two sons. 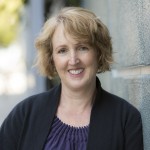